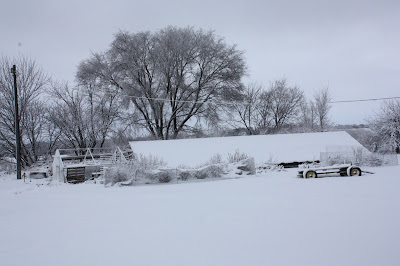 Thus far, the Genuine Faux Farm has gotten snow, but we haven't really gotten "socked in" with what I might call a significant snow this year. Yes, we did get five or so inches in the last one.  But, it's January in Iowa.  It's January in Northeast Iowa.   We're supposed to have snow cover, as far as I am concerned.

We've had to get Rosie out a few times now this season to clear the driving paths and I am grateful we have that tractor to do the heavy lifting.  Thus far, I haven't had to do snow removal in bitter cold - which I am also grateful for.  Our tractor doesn't have a cab, so there really isn't much protection from the elements and there have been some pretty rough moments clearing snow in a strong wind out of the North in prior seasons. 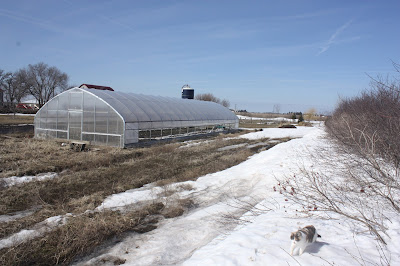 I was just remembering the Winter of 2018/2019 at our farm.  We had plenty of opportunities to test Rosie's ability to move snow (and my ability to handled Winter conditions).  We had so much snow that the drifts on the north edge of the farm were still about 15 feet tall in March, after there had been significant melting.

It might be hard to see in the picture above, but I was standing ON the drift and I could see OVER the high tunnel.  What is not so obvious in that picture is that the drop on the left is quite steep.  We didn't get pictures of these drifts earlier because it was difficult to get out to the North line.  My estimate based on observation from a distance is that there was maybe a foot or so of our bush line of Wild Plum and Highbush Cranberries that were visible when the drifts were the highest.  Those bushes are about 20 feet high. 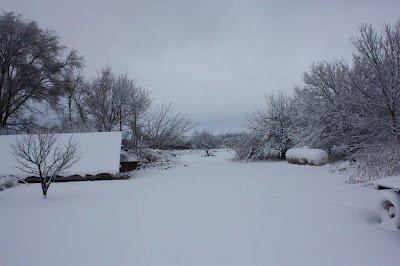 There is certainly plenty of time if Old Man Winter wants to pile on more snow this season.  After all, if it's going to be cold, we might as well have some snow.  But, I am not so certain I have a need to be able to walk on a drift and look down on our bush line again.

Part of the concern on our farm with excess snow are the high tunnels themselves.  If there is too much weight on the sides, we have to go out and remove snow.  After all, snow does not stay on the domed roof, it slides off and piles up.  I suspect many of you know how difficult snow that has melted part way and then frozen again is to shovel.   Well, it gets a bit harder when you're trying not to damage the plastic sides of the building.

I suppose we could bring Rosie out to help clear the snow, but that's a tricky operation.  After all, the whole point of removing some snow is to avoid damaging the high tunnels.  One slip up with the bigger equipment and we... damage the high tunnels. 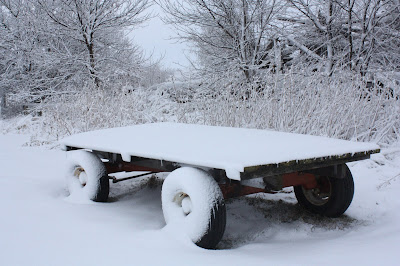 And then, there are the solar panels!  Typically a little sunshine with a lighter snow will cause it to melt off (just like the high tunnels).  But, that also results in a pile at the base that just might need to get moved after a bit.  Tammy and I just completed one iteration of snow removal in front of the solar panels before this last snow.  I suspect we'll do it at least one more time, if not twice.

With heavier snows, we have gone out with a push broom to pull as much of the snow off as we can.  We can't reach the top, but all you need to do is get what you can reach.  When the sun hits the exposed portions of the panels, it heats them up nicely.  It can be amusing to watch a whole section of snow slowly slide down until it falls off the bottom.

I wonder what we'll get with the end of the week snowfall that is forecast for the state?  I am pretty sure I won't be able to predict it, but I can tell you that the farm will probably look pretty white once its done.

Bold predictions, that's what we're all about around here!

Have a great day everyone.