"When you blame a poor person for not getting a better job, you accept that while their job is necessary, whoever does it should be poor." - unknown

I wish I could track down whoever should be credited with this quote.  If anyone knows, please let me know.  However, I think several have said things like this before (including myself and Tammy) - but maybe not so eloquent as this.  Therefore, I will use it.

Disclaimer #1: I am not claiming to be 'poor.'  It would be accurate to say we land in the vicinity of the median income for the United States, with most of our income derived from off-farm sources.
Disclaimer #2: This post is not so much about us as it is about an attitude.
Disclaimer #3: This post was started about a year ago.  Rather than wait for the perfect version of this post, I'm just going to give it a quick finish and leave it out there for people to consider and, perhaps, act on. 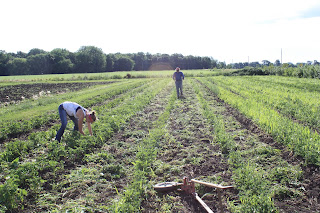 What is a "Worthy" Job?
We could look at this two ways.  What jobs are held to be most prestigious in the United States or what jobs are compensated (monetarily) at the highest rate based on mean salaries.  I am not particularly interested in quibbling about how the two web articles I linked categorize jobs, nor do I care particularly what professions may be missing or whether the titles used are the best descriptors for the job in question.  What I do care about is the question of how we measure the worth of a given occupation.

The "prestigious" list probably will surprise very few people overall.  Doctors, nurses, firefighters, EMT's, military officers and police officers all land on the list cited above.  These professions are supposed to have something to do with everyone's health and safety.   If you wish, you could include veterinarian in this list, though the focus is on animal health.  I am sure we could have a discussion about where these professions might land on the 'prestige meter' if we separated responses by American sub-cultures - but that is still not the point I want to make.

Other jobs on the list are typically synonymous with high achievement: scientist, engineer and architect.  The perception is that these people are highly trained and often intelligent individuals who bridge a gap between theory and application.  That might explain why you don't see things like 'mathematician,' 'philosopher,' 'physicist' or other similar titles, all cases where the general public may not see the application.  That, and a significant portion of the population claims to be math-phobic, which may artificially raise or lower opinions about various professions.  I could see someone thinking, "Wow! Engineers make all kinds of complicated stuff AND they're so smart with math!"  I could also see the same person thinking, "Ya, I'm sure a person with a PhD in Mathematics is really smart, but they must be a bit touched if they just study math because it's math..." (ed note: full disclosure, Rob does have a B.A. in Math along with Computer Science)

Conspicuously absent are the skilled trades, helping professions, various business positions, etc.  However, another 'prestige' list from a couple of years prior includes teachers and clergy from the 'helping professions.'

The highest paid list, however, shows very little relationship between what our perceptions of prestige seem to indicate.

Why Aren't "Worthy Jobs" the Best Paying Jobs?
Most people, if they allow themselves a moment for thought, will agree that they value their health and safety (as well as the health and safety of those they love) over most other things.  And now, here we are in the midst of a pandemic - and it is becoming ever more clear that there are many, MANY undervalued jobs that are incredibly important.

Among those occupations that often have lower compensation, but have gained a higher appreciation?  Food production and food delivery systems.  Forgive me if I don't share the love with all of the other professions that deserve it at this very moment - I've mentioned many of them earlier in this post already.  Let me just say that each of us should think hard about some of the workers we can not do without.  Then we need to work together to find ways so they can go about doing their jobs well, without the constant worry about how they will pay bills and whether they have to decide to pay the rent or get a necessary medication.

Is Growing Food a Worthy Job?
Let me put this into a personal perspective to make the final point.

Our farm income would not be sufficient for us to live reasonably well if neither of us worked off the farm.  If we both worked ON the farm full time, we could produce around 10 tons of food (probably more) each year.  To do that, we would still need to hire help.  And, in the end, we would be making some choices about medications versus other necessities.  Argue all you want about intangible benefits that come from this life-style, the point still is that you can't turn some of those things into currency that pays deductibles for doctor visits or pays for fuel to heat the home in winter.  It certainly does not pay for new siding on a house that needs it.
Again - this is NOT about us.  It is about using our farm's reality as a measuring stick.  If there are people out there (and there are) that want to farm on a small scale, sell to local markets and do it to make a living - we are a reasonable comparison to see if it is possible in the current climate.   Is ten tons of good food enough reason to expect those who provide the labor to earn a living wage?  You answer that for yourselves - I have my answer.

We want the people that serve as EMTs to be able to have a sufficient income so that the worry about finances doesn't distract them from doing their job well.  It is important that teachers are not breaking down because of the combined stress from concerns for the well-being of their students and their own family's overdue bills.  Do you want excellence in the products delivered by all those people in the 'service' industry?  Well, let's find a way so they can work one job and live a life that lets them work one job and do it well.

Let's rethink how we value various types of employment.  When you tell someone that they should be motivated to get out of these "dead-end, low paying jobs" and go get a "better job," what are you really saying?  In many ways, these ARE the better jobs.  Let's start treating them with more respect and let's support appropriate rewards for their efforts.
Posted by Rob Faux at 5:30 AM