It was starting to get darker outside, so I knew it was time to go close up the chickens for the night.  But, I was a bit more anxious to get out there than I am some nights because I could see that there were some extra-ordinary clouds and some lovely plays of light and shadows to observe.  On the other hand, it had been a bitter day, with strong winds and temps that never did get out of the 30s.  As I zipped up my coat, I wondered where I put the camera last.

Happily, I found it. 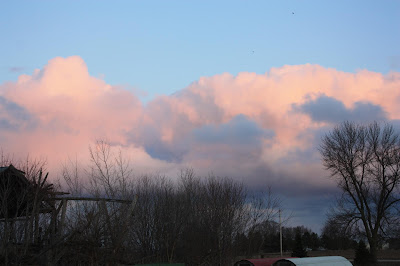 The clouds to our East were reflecting the last of the sun's rays for the day.  The colors and textures were what you might expect for late evening clouds.  I found them interesting because, on a warmer day, I might have expected some thunderheads.  But, today, they were just 'wanna-be' thunderheads. 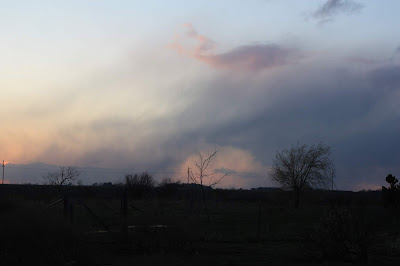 As I walked out towards the pasture to check if any birds were still out, I noticed this cloud formation.  I tend to associate this sort of thing with a 'ground blizzard.'  And, perhaps it is...sort of.  In any event, It was clear that this 'cloud' started at ground level.  We had already seen some pop-up snow showers earlier in the evening, so I was pretty sure we were going to get to see the "inside" of that cloud fairly soon. 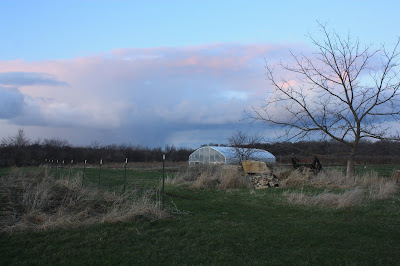 I looked back to the Northeast and was able to see that another pop-up had skirted to our North.  Apparently, it took a look at us on our farm and decided we didn't need to be in the snow globe at that moment. 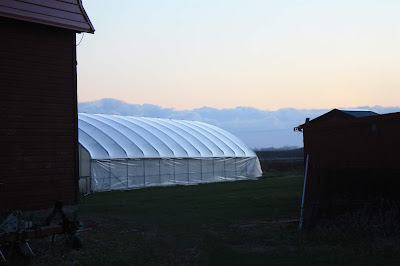 I looked back to the Southwest and saw the migrating 'Tripoli Mountain Range' that appears only on days like today. 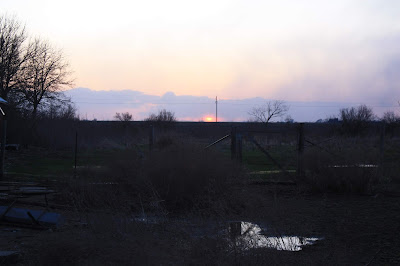 Then the sun decided to peek out... just a little as it slipped past the edge of the Earth.  The snow squall was getting closer (see the low cloud at right of the picture) so I decided I had better conclude my business.

I tucked the hens in for the night but decided to skip the bed-time story.  A quick dash inside and a look out the window so I could watch the snow globe effect of the pop-up snow shower on our farm.
Posted by Rob Faux at 9:11 AM