It was not that long ago, in the grand scheme of things, that multiple seed houses could be found in every state.  Most seed houses had their own breeding programs and might tout some of their best varieties in their advertising.  Sadly, local seed houses have, for the most part, gone away - much to the detriment of anyone who might like to grow a garden. 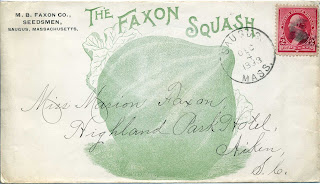 The Faxon Squash is listed in the Biodeversity Heritage Library as being introduced in 1894.  The M.B. Faxon company actually had a fairly widespread distribution of their catalogs in the late 1800s - so we should not make the assumption that a local seed house only sold locally.  However, the sheer number of seed houses throughout the world meant there were many more locations and organizations seeking to select for varieties that did well under all kinds of growing conditions.  The very nature of growing to produce seed implies careful attention to how the plants grow and how hybrid crosses pan out as they are developed.  Can you imagine how many different projects were running concurrently in the United States with multiple seed houses in most states?

As far as I have been able to tell, the M.B. Faxon company seems to have stopped publishing catalogues in the early 1900s and I am not sure if any strains of the "Faxon Squash" might survive today.  Again, I have not taken time to search for it beyond a cursory look, so who knows?

A.H.Ansley and Sons Hits the 'Big-time' 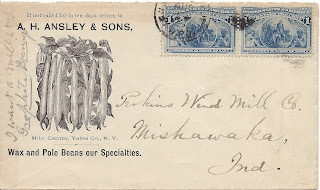 As mentioned earlier, there were many more seed houses and they came in all sorts of sizes with many kinds of specialty crops.  Some of the smaller, more local seed producers, such as A.H. Ansley and Sons might concentrate on developing and growing out particular crops for seed.  Every so often, these companies might hit on a winner.

The smaller, local producers wouldn't necessarily have the publicity to push a particular strain, but there were certainly larger concerns, such as W. Atlee Burpee & Co that might be willing to purchase the rights to introduce it to the public at large.  Some things may be no different then that they are now, I suspect Burpee introduced the "Perfection Wax" without giving any direct praise to Ansley.

The Myth of Perfect Veggies Has Long Tradition 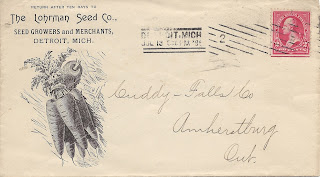 It is true that a grower of produce is always happiest when a significant portion of the crop looks like the perfect picture that is always shown in the catalog (or in this case, the perfect carrots on the envelope).  But, perfect looks have never guaranteed satisfactory taste.  Nonetheless, it is clear that humans have always had a problem accepting that a tasty carrot just might not have that perfect wedge shape.

Some Veggies Have Lost Favor Over Time 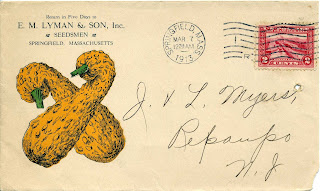 The crookneck summer squash shown above on the E.M. Lymon and Son advertising cover illustrates one veggie type that you just don't see much anymore.  Most growers who do raise summer squash prefer the straightneck varieties that have a smooth, rather than warty skin.  There was a short resurgence of the patty-pan shaped summer squashes, but that also appears to have faded.  It will be interesting to see if or when summer squash and the various types might make a comeback.

Potato Famine or Not, Some Veggies Have Staying Power 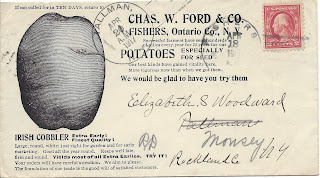 Then, there is the potato.  They store easily through the Winter and they can be used in any number of ways.  There is certainly debate as to how healthy they might be, but I suspect that has more to do with the method of preparation than the tubers themselves.  In fact, there are numerous varieties out there, some of which have a colored flesh, that have been show to have more nutrition than some of the more common varieties.

Just Pull an Ear Off the Stalk 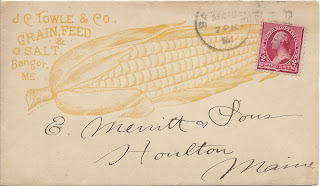 There was a time when the difference between field corn and 'sweet' corn was less well defined.  I was briefly introduced to the idea that even field corn could taste good if you got it 'young enough.'  (Thank you Uncle Brownie)  But, then, this also implied that it had not recently been sprayed with a myriad of pesticides and fungicides.  (Thank you again, Uncle Brownie)

While I still prefer to cook our corn on the cob, I still find a certain pleasure pulling an ear off the stalk and eating in the field.  Sadly, we don't grow corn on our farm all that often because it gets low crop priority.  Well, not this year.  This year, I want my fifty row feet of corn.

Then, I'm going out there in August.  I'm going to pull an ear off the stalk, peal back the shuck...

Email ThisBlogThis!Share to TwitterShare to FacebookShare to Pinterest
Labels: Just Veg-ing Out, philosophy of philatelics, Planting a Seed