Sandhill Cranes love Sweets Marsh near Tripoli and the farm is close enough that we can often hear their croaking call in the early morning as we do chores.  Every once in a while, they fly over, croaking as they go. 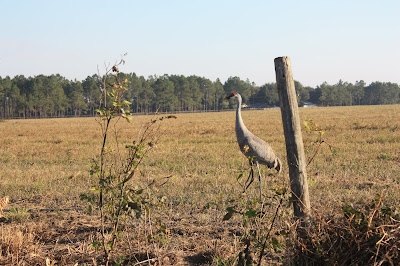 The picture above, oddly enough, was taken during a driving trip to see family in Florida.  We really should break out the camera at the march as well and try to capture a Sandhill on 'film.'

The National Park Service has a recording of a large flock of Sandhills making the croaking call.   The Cornell Lab has a page with multiple examples, including single birds calling - which is more like what we hear on the farm.

Oh, and the "Space Chicken" title?  That's what Tammy and I often call them.  They remind me a little bit of the 'Instant Martians' that Marvin the Martian employed in cartoons.  Isn't that lovely?
Posted by Rob Faux at 9:43 AM