As odd as it might sound to some of our farmer friends who live elsewhere in the state, the last truly dry period of weather we had during the growing season that caused us any concern was in 2012.  It was during that season that rainshowers and storms dried up as they approached or they simply split and traveled on either side.  We claimed this was the work of a fictional(?) anti-weather machine. 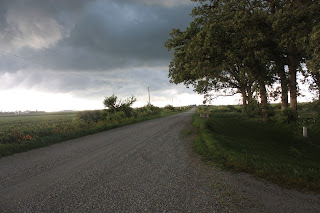 We are not terribly dry right now, so there really isn't a parallel with 2012 here.  But, we did get to see the anti-weather machine at work yesterday as we watched not one, not two, but three systems (mostly) avoid the farm with one splitting roughly in half and going on either side of us. 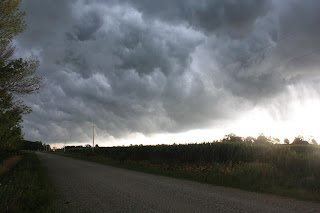 We saw the first one heading our way from the North in the morning and noticed some fantastic shelf clouds heading our way.  I wanted to grab the camera, but preparing for what looked like a bit of a poof of wind was more important at the time.  Once those things were done, I was able to go get the camera and see what I could see.

From a picture taking perspective, we missed getting the cool shots of the shelf cloud approaching the farm.  But, we still were able to take interesting pictures. 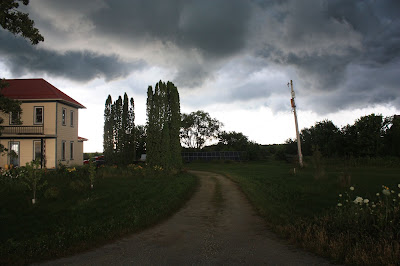 It is amazing how dark everything gets when the clouds are overhead, especially considering the day had started out as a bright and sunny one.   Since I am not particularly good at quickly changing settings on the camera, there were numerous photos I thought were going to be good that did not turn out well.  It has a great deal to do with all of the lighting challenges that come with this sort of weather.  It rarely seems that the pictures do the actual storm justice. 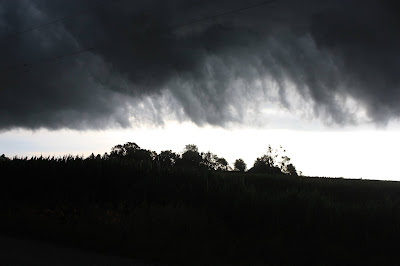 Perhaps the only shot that really shows how this storm felt highlights fingers on the leading edge of the storm.  These appeared only briefly and I was able to catch them with the appropriate background to show their structure.

I did all that and then got inside before it started to drip on us.  It was only a minute or so of light rain for us.  But, a mile or so to our East saw some heavy rain.
Posted by Rob Faux at 5:30 AM