The Power Of "No"

I've been thinking - which is a dangerous pastime, as you all know.

You see, the spray planes are showing up everywhere now because it is the end of July - and that's what Iowa is at this time.  I don't think it is right.  But, it's what we've got.

So, the easiest thing to do would be to go inside.  Close the windows and hide in the house until August 3 or so. 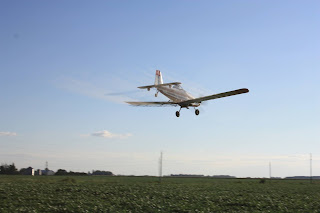 Today (Friday), I wanted to do just that.  There was a plane that was about 1/2 mile to our South that started spraying early afternoon.  We have two honey bee hives and the regulations are that spray within a mile is supposed to wait until after 6PM.  And, the winds were occasionally going over the maximum allowed wind speed.  Tammy, had the energy to make calls - something I rarely have the energy to do.  And she went about the process of trying to say "no, this isn't right."


When you are in a position to say no to someone and they need to hear that "no", you should say no.


A case in point:


Iserved as an educator in more than one setting in the past.  When you are placed in front of a classroom or you are the facilitator for an online event, there is an implied responsibility to create a positive environment for all members of the class or group.  The instructor also has an obligation to only pass students forward to the next class (or graduation) if they have shown sufficient ability to do the tasks that completion of that course of study says they can do.  Sometimes, that means you have to tell someone "no" - even when it is difficult.

There was a student, by the name of "Joe" who had received a C- in each of the prior two required courses before entering my class.  "Joe" was frequently in the office, asking questions and easily eating up hour long blocks of my office hours.  "Joe" often appeared to not have a grasp of the programming language they were supposed to understand at least passably well.  "Joe" would interrupt other students in class with his own questions each session.  "Joe" wouldn't take a hint that I had five people in line behind him to speak with me.  "Joe" hounded other students in the class to see their programs.

I did draw the line when "Joe" tried to cut in front of people who were waiting to get help and I started to put time limits on his office visits.  Then "Joe" handed in a program that was clearly copied from a whole host of other students.

Let's be clear here.  It was parts and pieces from several programs from several other students.  It still had their names and comments in it.  None of it was even placed in any order that could hope to be put into a semblance of a working program.  There was no recognition of even what parts of the program should go where.  So, I called him on it.

"Joe" got defensive and claimed that if I had better office hours he could get the help he needed and that this was my fault.  When that failed to move me, "Joe" tried to tell me that other students must have 'played a trick on him.'  So, I offered that he could code a simple program for me in the lab that he should have been able to do after the first prerequisite course.  He looked startled and then refused.  As it was, he had failed every in lab coding project thus far in the class.  To make a long story less long, "Joe" eventually took his complaint to the department chair.  Then, to the next level up.  Then to whomever else at the college he could register a complaint.  In other words, "Joe" was very good at finding all of the systems for which he could make a teacher feel threatened.

I stuck to my guns and I stuck to the failing grade.

I learned later that this person had received a "gift" C- from the professors for each of the prior classes in large part because they did not want to deal with the fall-out that would ensue if they gave a grade lower than that.  They passed the buck on to me, essentially (or whomever taught the next course in the sequence). In fact, this was not an uncommon practice to pass someone through who made enough noise because it was too hard to say 'no' to them.

Let me just say right here that I learned to understand why that is.  First hand.

But, before I get all self-righteous and point out how brave I was to stand-up and say 'no' to this person.  Look more carefully at the narrative.

I should have said "no" several times prior to the issue with grades.
I should have been stronger in protecting the other students in the class.  By failing to enforce some boundaries, other people who needed help did not receive it in a timely fashion.
Of course, I could defend myself by saying I had no history with this particular person and I was giving them the benefit of the doubt.  But, as soon as I observed them infringing on other learners, I should have called a halt to that action.

And, in future courses, I did do just that with other students who showed similar (but not nearly as drastic) tendencies to infringe on the learning processes of other students.

Did it get easier?
No.  But, at least it didn't really get harder to do.  And I saw positive results when I identified these problems and said 'no' early on.

Saying No to Chemical Trespass

So, does it get easier to say 'no' when pesticides are being applied in our area and we see that the winds are up, or the time is wrong, or we smell the chemicals?

No.  And it feels like it is getting harder.
I don't want to do this anymore.
I want to defend our farm from chemical trespass.  True.  But, I know there is a bigger game afoot too.  If I don't say 'no' how many other people will struggle because I let it pass?

At least Tammy was able to say 'no' today.  Thank you Tammy.  In fact, Tammy is usually the one who has the strength in the moment to do that sort of thing.  I usually address the bigger picture of 'no.'  I am the one who is trying to get more voices to say 'no' with us by writing or speaking.  I just have a harder time with the showdown in the moment of time it happens.

It's time to say 'no' together.  Because if we don't, there will be consequences down the road that will be paid by people other than ourselves.  And that's not ok.
Posted by Rob Faux at 5:30 AM