Meanwhile, Back at the Farm

There are sounds we experience in the country that automatically put me on alert and cause my attitude to change for the worse no matter how I was feeling just prior to hearing them.  One of those is the self-important whine of a "highboy" spray application rig.  Ok... pretty much any spray application rig gets my attention and makes me less happy than I was.  But, those highboys have a very distinctive sound that just grates on me.

As I was doing some office work, I heard a piece of big equipment slow down in front of our house and enter the field just South of us.  It wasn't a highboy, but it was a spray rig.  We've had enough bad situations that my first thought is some mix of "oh no, not again" and "stupid, nasty, irritating, etc etc."

THEN, I usually calm myself and check the conditions.  And they were about as good as they were going to get.  Very light wind, moving away from us.  Possible conditions for temperature inversions, so if it is a volatile herbicide, we could have a problem.  I also noted that the rig looked a little different, as did the service vehicle that came with it.

I prepared myself to to make myself known  and I was intent on being polite, but I was ready to be forceful if I needed to be. 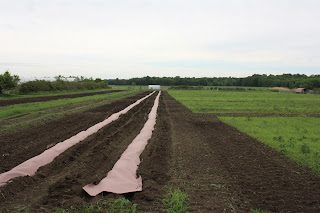 The sad thing is, it does not normally occur to applicators that they could cause us a problem.  Some are sold on the idea that this stuff 'never drifts' because that's what they have 'been told.'  Others are 'just doing their job' and can't be bothered to do things that aren't 'in their pay scale.'    And then, there are those that feel we are a nuisance and that our farm is far less important than their farm.

So, what happened on this day?

We had a pleasant surprise.  The application team was very willing to talk to me.  I made note immediately that they had waited for the wind to shift AWAY from our farm and that I was grateful for the consideration.  They also pointed out to me that they were using a heavier carrying agent AND they were using new spray nozzles that encouraged a heavier droplet size.

These people were equally unhappy with the number of sprayers (and the companies they work for) that apply and leave what looks like a cloud of mist behind their rig.  In his words - "you know you are not doing it right when you see that cloud.  That's just an indicator."  He heartily agreed that sloppy application methods promote herbicide resistant weeds and that they just cause conflict that isn't necessary between farmers like me and professionals like him.  He also pointed out that "this $#%@ is dangerous.  You've got to be careful with it."

And suddenly, I had a bit more hope for this world after one short conversation with people I thought would naturally be an adversary. 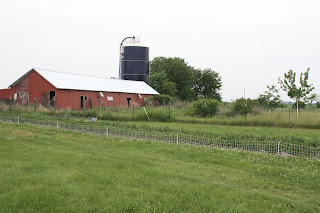 1. This was about being a responsible professional.

I expect this of myself as a grower of food for people to consume and I have a difficult time understanding people who will not do what it takes to be a responsible professional in whatever it is they do.  This is especially true when you deal with "dangerous $%#^."  I won't accept having an irresponsible and unprofessional doctor performing surgery on my lovely bride.  I don't believe software developers should design and code as if any error will 'cause little harm to others.'  And, I certainly don't want anyone who is applying dangerous $%*^ to do it in a way that illustrates just how dangerous it can be.

2. This was about having integrity so you feel no need to bluster, bully or avoid discussion.

The person I talked to did mention that he has had people angrily confront him and he was ready for that possibility with me.  But, he understood why.  If your experience with pesticide applicators has been pretty awful, you'll just assume all applicators are pretty awful.  That, in itself, made him upset at other applicators that do a poor job - causing problems for those who are true professionals to carry the same stigma.

And, you know what.  If his experience with organic growers has been pretty awful, it would make sense that he might not initially want to talk to me either.  I'd like to think I was ALSO being a responsible professional with integrity.

I can still hold the position that I think we over use chemicals for pest control and he can still tell me that they are a valid tool if used correctly.  In fact, I'd love to sit down and have an hour long conversation about it with him some day.  Who knows what each of us would learn?

3. This was about being brave and motivated enough to point out something that was done RIGHT.

It is very difficult to walk up to a pesticide applicator you do not know to have a discussion about a topic that is loaded for you AND a topic that can feel like a personal attack to them.  Add to it my general dislike of the pesticides and it is tempting to just grumble about it to each other and just get unhappy all over again.

But, I told people in my computer science classes and I tell people who get farm products from us that it is just as important to tell those who do a job that you liked how they are doing something as it is to tell them you would like them to change.  In fact it might be more important to highlight when things go well!

Does it mean things will be ok the next time someone sprays near us?  Of course not.  But I believe we just raised the chances a little bit.
Posted by Rob Faux at 5:30 AM

Email ThisBlogThis!Share to TwitterShare to FacebookShare to Pinterest
Labels: overspray