What is Rob's Job Part II

There continues to be some curiosity surrounding Rob's new job with the Pesticide Action Network, so I thought it might be a useful post to give a bit more context now that I am about to conclude my third month in their employ!  As you might expect, I know a good bit better how I can answer the natural questions people might have.  It also makes sense that I would encourage you to support PAN if you find that the work they do matches with your intentions for giving.  If it does not, well, that's fine too.  Just give me a chance to change your mind some day!

In short - Rob has to do some writing for PAN.  A subset of the writing has an Iowa slant or focus.  Most of that content comes out in the Iowa Updates posted every four weeks.  Additional material is posted by me on Facebook and Twitter by PAN and we do send out emails to a special Iowa list of interested persons.  They receive the Iowa Updates that get posted online, but they may also receive additional alerts or information that will not necessarily appear on the PAN web pages.  So, if there are things that are related to Iowa legislative sessions and our priorities, then I will typically be the author.

I am also charged with writing about national topics from a farmer's perspective.   PAN sees some real value in having someone who works the land comment about the policies they support as well as those they oppose.  Therefore, this is most of my energies will be placed. The most recent example of my farmer voice writing can be found here: I'd Want More Tools than a Hammer.

Over time, I will also write pieces in the 'organizational voice.'  In those cases, I will not be listed as an author, but they will appear as resources that PAN produces and houses on their websites.  And, in addition to these duties, I am part of a team that reads and edits each other's work, checking facts and working to find the best ways we can say things in a limited number of words (because, unlike most of those who read this blog - people have very short attention spans!).

PAN also has several 'larger' projects that may also pull me in for various tasks.  For example, there is an agroecology project that I have stepped into as a part of my job.  At the very least, this job promises to be interesting.

He Even Gets Interviewed with His PAN Hat On

Ok.  He is still wearing that lovely Cincinnati Reds hat when he does these things.  The "PAN hat" is a metaphorical hat.  And I'm only saying that because I wanted to use the word "metaphorical" in the blog today.  Now I am happy and I can continue with the regularly scheduled content! 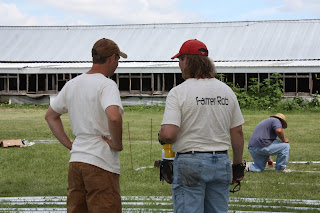 Apparently, I have shown some propensity to do reasonably well in interviews, both live and for articles, so they are already trotting me out there on a semi-regular basis.  There is some pressure that comes with this because I need to be very careful to speak to what I know rather than speculate.  That also means that I have to keep working on expanding my knowledge so I can answer questions that are not directly specific to the kinds of farming I do.  Granted, most requests for interviews come from 'friendly sources' who are unlikely to be trying to trap me with something.  However, I suspect everyone who reads the blog knows how important I think it is to maintain accuracy and integrity when you want to advocate for any given position.

And, please note.  I wanted to use the word 'propensity' in this blog post.  I succeeded there as well!  Wow! This is a great blog post so far!

****Cue lots of people rolling their eyes heavenward after this statement ****

The funny thing about it is this - when you interview, you can never be certain what they will decide to use.  For example, I had a suspicion that the little tidbit they took for this Marketplace interview might be something they would select.  But, it wasn't really the thing I felt was the most important part of the interview.   I even hesitated bringing it up in hopes that they wouldn't seize on it.  Yes, it is a valid point and it is dramatic.  But...

In contrast, the piece of the interview they selected for this Civil Eats piece was probably more consistent with my overall message I was hoping to deliver.

Either way, I get it.  They need to collect information, understand it, and then compile into something people will read that is (hopefully) accurate and compelling.

Taking it From There
I expect that I will have involvement in the next Iowa Legislative Session. I also anticipate that I will be encouraged to give presentations among other things.  We'll see where it goes and I'll try to take you all along for the ride!  If you have suggestions for topics I should address with my PAN hat, send them on to me.  If you want to know how you can help make good changes in this world with respect to pesticides, ask!

Let's see what we can manage together.
Posted by Rob Faux at 5:30 AM