The realization is finally hitting home.  I have to accept that a productive week for me is not the same as it once was. The days of the Very Ambitious Plan - at least as they were at the point I wrote the VAP blog - are over.  We have now entered the period of our lives where we have the Varying Amounts of Ambition Plan (VAAP).

Garlic Harvest 2020
The new normal for us at the farm was very clearly outlined during our 2020 garlic harvest process and results.  We knew Sophie enjoyed garlic harvest, so Tammy asked if she (and any of her siblings) wanted to participate in the harvest (in a proper, physically distanced and safe way).  As a result, we had help from Max and Sophie with the harvest, bundling and hanging and Victoria came out and helped us harvest AND clean containers.  Their help was greatly appreciated and the work went well - thank you to all!

But, the differences from prior years were pretty obvious.
1. This was only the third time this year we had outside help working on the farm.
2. I was not involved in the garlic harvest at all.  It was all Tammy, Victoria, Max and Sophie.

Well, ok.  I did help with some clean-up and put away once our helpers left.  But, that's about it.

Adjusting Farm Productivity Expectations
Over the past fifteen, or so, years, we would have all hands involved in the garlic harvest.  Typically, we would have three workers in addition to the two of us pulling in somewhere from 3000-3500 heads of garlic.  The process would include pulling, counting, bundling and hanging them all up so they could cure.  This year, we had a smaller crop (just over 2000 head) as we had planned.

Having other people on the farm to help with the work simply high-lighted how different everything is for us now.  You see, in Summers past, we normally had people working with us on the farm four to six days of the week.  If you don't think the presence of workers have an impact on how motivated we were to keep moving with our farm work, then you need to reconsider.  It was important to me, especially, that I be out and visible while others were working for us.  Even if I wasn't right there working on the same job, I felt that I needed to provide an example and be available.  I never wanted anyone to think I would ask them to do anything I wouldn't do.  And, there were numerous things I took upon myself because I didn't feel I should ask anyone else to do it.

In other words, the farm and the farm tasks took over and other things were picked up as we were able to do them.  It meant that we made a great deal of progress on a whole host of farm things.  There was, of course, always more to do and it always felt like we could never catch up.

But, the sheer volume of tasks we could check off of our lists was amazing.  And, if you added the daily chore lists and other little things we didn't bother putting on those lists?   Sometimes even I was impressed.

Now here we are in 2020.  We have from 70 to 80 person hours of labor per week missing from our resources when you consider that we have no workers for the farm this year.  Then you can subtract 32 hours a week of my own labor hours.  It's clear that we need to continue to adjust our expectations as we run out of time to do what we think we need to do. 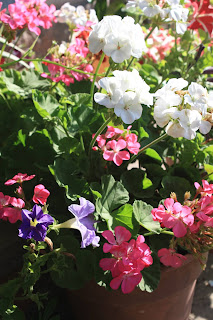 Not fair.  But, it's the only comparison we've got right now.

As a result, I think we're both deeply disappointed in how far behind we are and how little it seems we have accomplished.

We are deeply disappointed even though we are both very aware that Tammy's work as an educator for Wartburg College is taking much more of her time and energy than it has in past Summers.  We are still upset by our lack of farm achievement despite the fact that Rob has been successful in adapting to his new job with the Pesticide Action Network.

So, we are trying very hard to recognize the new kinds of productivity that are part of the landscape at the Genuine Faux Farm.  This includes a great deal more reading, researching and writing on my part.  Perhaps if we both do a better job of giving ourselves credit for the things we are accomplishing, we might feel less like our ambitions have been highly variable this year.

But, this is hard.  We didn't get some crops planted that we fully intended on planting this season.  This is, in my mind, an out and out failure on my part.  Sure.  Sure.  There were weather issues and other things that made it difficult.  But, I simply didn't find a way to do it, like I have every other season.  And, I have yet to give enough weight to accomplishments of other sorts to balance the failures in farm tasks that were, frankly, inevitable when we decided not to find farm workers for the season and when we decided I would take this PAN job.

Part of the battle is learning to identify what goals are attainable and to adjust when situations change.  My personal battle right now is to give fair value to accomplishments that have nothing to do with our potato crop... or the necessary repairs on a high tunnel.... or the conditions of our fields. 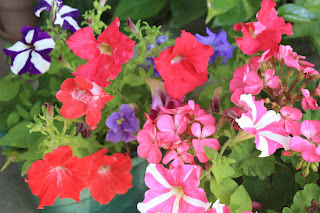 In the past two weeks I have published two articles for the Pesticide Action Network that have been well received.  One focused on the value and the plight of pollinators.  The other is a response to the proposed de-regulation of a new Genetically Engineered (GE) corn seed.  I also produced the Iowa Newsletter for PAN this past week.  I need to remind myself that these pieces require more research and fact checking than anything I write for this blog because I am not only speaking for myself there.  It doesn't fly to just take a bunch of pictures of flowers and throw them together and call it a blog post - though I still see value in that - just look at yesterday's post on our blog!

I was involved in our pollinator match fund drive campaign as well.  A campaign that has done quite well thus far.  And, yes, there is still time to donate, even though we have met our matching funds amount!

The real accomplishment, with this new job, has been for me to become a useful part of an effective team.  It's something that is difficult for me to measure.  It's not the same as looking at your year to date harvest numbers for green beans.  It is far more nebulous than looking at the records and seeing you have delivered 600 CSA shares over a period of a few months.

And yes, Tammy has an equally impressive set of accomplishments for the past couple of weeks.  But, like me, many of them don't have an immediately identifiable tangible result that we can point to.  I can tell you, however, that she has done some amazing things and I am proud of her.

And, that, my friends, is why we are working at redefining what productivity is at the Genuine Faux Farm.  We are doing it because what we are accomplishing is different than it was, not less than it was.
Posted by Rob Faux at 5:30 AM