One of the advantages, if you can call it that, of having a phone that also has a camera is that you can capture a moment in time without having to go out of your way to find the camera.   Sadly, the quality of pictures are inferior.  But, it still means that I was able to record a couple of moments on the farm that would otherwise have been missed.

I admit that I fought moving from the old flip phone for some time, just as we delayed moving from a land line.  It is not that I don't appreciate what a person CAN do with a "smart" phone.  It is more that I do not appreciate some of the things these phones seem to encourage people to do (and not do).

But, this blog post is not just a rant about phones.

That's a great question!  And, when I started the blog I was not entirely sure where it was going to go, but I knew the root of it would have something to do with the pictures I discovered on my phone.  That, in turn, made me think about phones (as you just saw).  I rapidly moved past that to consider the 'why.'  Why do I tend to adopt new technologies slower than many people?  This might seem especially odd given my education in Computer Science.

Sometimes I see new technologies as something akin to the storm that is approaching in the photos above and below.  You see them rapidly approaching from the horizon and they look pretty impressive at the outset.  Before you know that, they're on you and the weather they bring is not always all that beneficial to you.  Sometimes, the promised rain is barely more than a drop or two.  Other times, the damage caused by the storm is far greater than any promise there was for a beneficial rain. 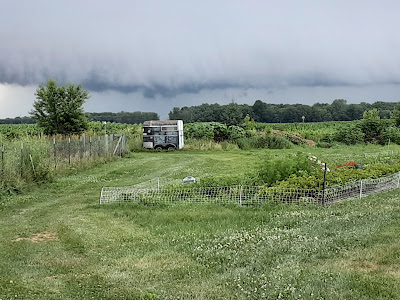 A friend of mine in college, who also happened to be someone I had great respect for, told me that they regretted taking a class on the analytical study of music.  Why?  It was because they felt it actually was reducing their appreciation of music as a whole because they were, perhaps, getting into the music so deeply that it was difficult to merely listen without starting to deconstruct what was there.

In a similar fashion, my studies in computing made me very aware of all that goes into technology.  Because of those studies, I tend to deconstruct new technologies and immediate look for unintended consequences that might follow or ways people are likely to misuse something once it is developed.  I am also fully aware that many 'new tech' items are simply vaporware - unable to deliver on the promise.  As a result, I am not likely to rush towards new tools and I often hold them away from myself until it is required that I use them or I am convinced that their use would truly be beneficial.   Happily for me, my training also makes it a bit easier for me to adapt and properly use the technology once I decide I must use it.

The technologies that seem to find their way into my toolbox are often more like the mist that you see developing in the first two photos.  They have slowly permeated our world until we can't seem to escape their presence - even if we wanted to.
Posted by Rob Faux at 5:30 AM