Welcome to the first Postal History Sunday of 2021!  We hope you take the opportunity to enjoy learning something new - or at least you like to be entertained by a person who thoroughly enjoys their hobby.  Either way, this isn't a half bad way to spend a few moments of your day.

Postal historians and postal history collectors often reference docketing on various mail pieces, which can take various forms.  Docketing would be some sort of handwriting on the letter or piece of mail that either provides record-keeping functions for the recipient OR directives for the postal services. 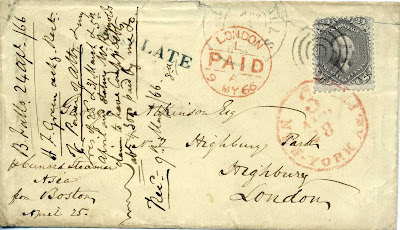 For example, the item above shows lots and LOTS of docketing.

The writing that runs sideways on the left side of the envelope would be filing notes by the recipient.  George Atkinson, Esq, a lawyer by trade, probably did what many at the time did - they filed documents and stored them in the envelope they came in.  To provide for easy reference, they recorded the date and origin of the contents, a brief summary AND the date the letter was received in their office (May 9, 1866).  It just so happens this date matches the London marking showing in red towards the top.

This method of filing is part of the reason postal historians have as much material to collect as they do.  It also explains why many of the same addressees keep showing up on these pieces of mail.

The other handwriting on the front of this letter includes the address AND some directional docketing at the lower left.  This docket reads:

At least - that's what the writer was hoping when they mailed the letter.  It turns out - if you read the New York marking in red at the right side - that it left New York on April 28 on a steamer that was NOT the Asia.  We'll get back to that in a bit!

Success and Failure in Directional Dockets

If you look long enough, you can find all kinds of docketing on the mail that clearly were meant to try to direct the post office with varying degrees of success.  Take the item below for example. 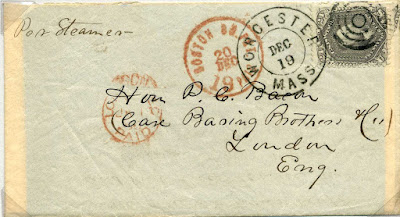 The docket "per Steamer" at the top left could have meant one of three things.

I can tell you that Worcester, Mass is just west of Boston and there are no streams that would have had steamers plying between the two locations.  I am pretty certain a train or a coach carried the letter to the Boston foreign mail office.  I am ALSO quite certain that the letter rode on a steamship (a Cunard Line ship) to cross the Atlantic.  In fact, there really wasn't another way that mail would do so at the time.  So, you could argue that the person who wrote this wasted ink on the docket.

In their defense, it had not been that many years that steamships were the primary mode of transportation across the seas.  The person writing could very well still remember the days that most ships went by sail, not steam engine.  They might even have experienced a time when you would WANT to indicate that you wanted it to go by a steamship rather than one that went under sail and you had to say so on your letter.

The item below, shows some successful direction given by a docket: 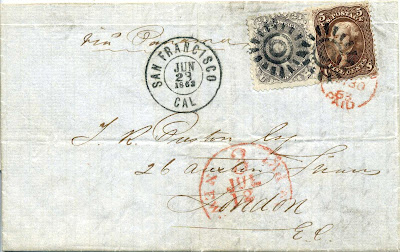 The words "via Panama" very clearly directed the post office in San Francisco to put it on a steamer that would go down the coast to Panama.  The letter then would go overland at the isthmus and then board another steamer to New York on the eastern shore of the isthmus.  There was, in fact, another alternative since overland routes were now in use from California.  By 1863, most letter mail went overland by default.  So, if a letter writer preferred the steamship via Panama, they had to indicate that preference as this person did here.

The question is, of course, "why did this person want this to go on the slower route?"  We may never know this answer for certain.  But, perhaps the sender had heard enough about mail coach robberies that they did not want to risk that with this mail item?  Maybe there was a known weather issue that was going to delay overland mail?  Whatever the case, this is a time when the directive was followed - even if it was going to result in slower transit of the mail item. 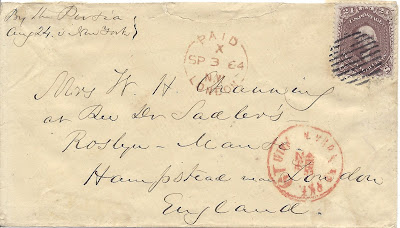 And here is another successful routing docket.  This one reads "by the Persia Aug 24 in New York."  Unfortunately for the postal historian (me), there are no contents in the letter and there is no originating postmark, so I cannot tell for certain where this item was mailed from in the United States.  Clearly, it DID go through New York and it DID leave on a ship from New York on August 24 (yes, it was the Persia).  So, you could say that the docket worked - it went where the writer wanted it to go based on that agreement.

By the time we get to letters in the 1860s, the need for writers to include directional docketing had been greatly reduced - though there were times when it was still necessary.  As far as mail from the United States to England, the postal service had a pretty good system for getting letters to the earliest departing steamship - there was very little a directional docket would do that would improve that.

As long as the letter above was mailed on time for that New York departure, it was going to take the earliest departing ship even without the docket.

But, the letter below actually has a somewhat useful docket! 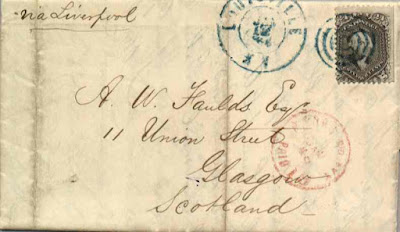 The docket "via Liverpool" at top left could be construed as a directive to put the letter on one of the shipping lines that went through Liverpool - but it actually did more than that.  You see, the Cunard Line would stop at Cork, Ireland and offload mail for England there.  It would then go by rail, cross the water from Kingston to Holyhead, and then on to London by rail.

Because this item was headed to Scotland, the writer indicated that it should stay on the ship until it got to Liverpool the next day.  From there it would go to Glasgow.

But, again, there is a question as to exactly how useful the docket might be because the mail volume to the United Kingdom was sufficient that mail to Scotland could have been placed into its own mailbag.  If that were the case, it would take the most efficient route to Scotland without needing the docket.  Once more, this is a case where we see mail handling in the process of change.  Dockets were once fairly critical in directing the mail and they are becoming less important as the amount of mail increases and the procedures become more refined.

Back to the Original Cover

Here we are - back at the original item with the docket claiming the letter should go to Boston and leave on the Cunard Steamer Asia on April 25 (Wednesday).  But, clearly, it left New York on a steamer that Saturday (April 28).

The reason for the delay is simple.  The writer did not make it to the post office in time to get the mail to Boston and the departure of the Asia.  The post office simply sent the item to New York, where the next ship was scheduled to sail across the Atlantic.

But, here is the problem for the post office.  The writer makes a claim by saying the letter was to leave Boston on April 25.  The post office provides themselves evidence that it is not THEIR problem by putting the "Too Late" marking on the envelope.  "Hey, George Atkinson.  I don't care what the guy who wrote this says - he didn't get it to us in time for that ship.  Take it up with him!"

This illustrates a bit more about why dockets were still routinely placed on letters.  It could often serve as attempt to provide evidence of timeliness during an era when it took ten to twelve days to cross the Atlantic - and a missed ship could add three more days to the wait!

And there you are!  The first Postal History Sunday of 2021.  I hope you have a great remainder of the weekend and the coming week treats you and yours well.