This is the place and time where I remind you that you should pack your troubles into a tight, little ball and then throw them as far away from your person as you are humanly able to do.  And, if you are not much for throwing things, call your young nephew over and tell him there is "no throwing in the house" and hand him that ball.  I suspect there will be plenty of distance, but it might add, rather than detract, from your list of troubles.

This week I thought I would reflect a little bit on how postal history helps me to understand how the alignment of nations and the borders they keep evolve over time.  It is always tempting to try to fit history and events we did not live into our own understanding rather than trying to learn how things were at that point in time. But enough philosophy!  Let's get down to some interesting postal history and maybe... just maybe... learn something new!

One of the things I tell myself to remember as I explore a postal history item is that the people who carried mail and implemented the systems to handle that mail were NOT worried about my desire as a collector to find order amidst the artifacts I collect.  In fact, it is frequently the case that what I uncover is a tangled web that may not have a perfectly easy and simple explanation. 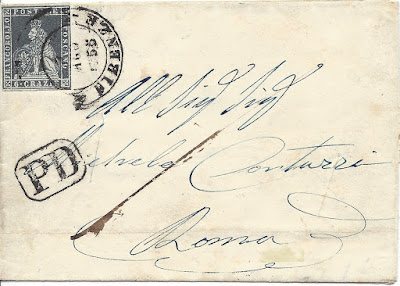 One such case study would be the postal history that surrounds the Italian States prior to their unification as the Kingdom of Italy in the 1860s.  Prior to 1859, Italy was not a single political unit.  The Kingdom of Lombardy-Venetia was a semi-autonomous state under the direction of Austria.  Sardinia, in the northwest (and the island) was a kingdom that had a fairly close relationship with France.  Tuscany, Modena and Parma were their own entities, but each were influenced to varying extents by Austria.  The Papal States controlled all of central Italy and the Kingdom of the Two Sicilies (Neapolitan & Sicilian territories) covered the south.

And - of course - I have over-simplified the whole thing.  Don't quibble with details here.  I'm just trying to point out that Italy was a bit more complex at the time if you want to figure out the postal history.  What we have here is enough of a picture that we can identify the stamp issuing postal services in Italy during this period. 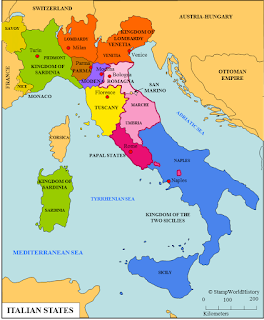 When it comes to postal history in the 1850s and 1860s for this area, it is very important that you learn as much of the basics as you can about the history of the various states and how they interacted with each other.  All of these entities had their own postal systems, they had different currencies and usually had different rules for handling the post.  Sometimes they even had different weight and distance metrics.  If that isn't enough for a little confusion on my part, then I don't know what is!

For points of interest for the cover I show above - note the yellow (Tuscany) and the three shades of pink (Papal States) on the map.

So - let's get back to that Tuscan Lion, shall we? 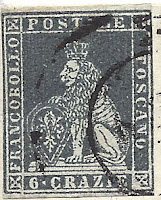 The Marzocco, the heraldic lion of Florence (Firenze), is depicted on the first postage stamps issued by the Tuscan postal services in 1851.  As a point of interest, the most well-known sculpture of the Marzocco was created by Donatello in the 15th century.

The Tuscans used a monetary system based on the Tuscan Lire that could be divided into 12 crazie or 20 soldi.  The stamp shown above indicated payment of 6 crazie.  If you were wondering, "crazie" is plural and "crazia" would be the singular form of this word - one crazia, two crazie.  The weight of a letter was determined in denari (denaro singular) with a standard domestic letter weighing no more than 6 denari (7.1 grams).

The letter above was sent from Firenze (Florence), Tuscany to Rome in the Papal States.  The cost of that letter was determined to be 6 crazie because the distance was over 20 Austrian leghe (leagues - with 1 lega equal to 7.5 km).  A single letter was anything weighing up to 17.5 grams (about 15 denari).

So, what's with the Austrian leghe....  and why rate letters for every 15 denari when the internal rates were figured for each 6 denari?

I am glad you asked!

It just so happens that Austria promoted a "postal league" where participating postal services agreed to standardized rates for mail.  Austria, Lombardy and Venetia, Parma, Modena, Tuscany and the Papal States had all entered the agreement.  In order to make it work, rough equivalents in weights and currencies had to be determined.  You can certainly see how Austria felt this could be to their benefit as they were looking to solidify their influence in the region!  Easier communication lines might promote political cooperation.

When Baden was a Grand Duchy and Bavaria a Kingdom

Germany was also undergoing a transformation in the 1850s and 1860s that led to the eventual unification of the various states under the leadership of Prussia.  The folded letter shown below was mailed in 1853 from Mannheim to Sinsheim - both of which were inside the borders of the German state of Baden.  Baden had its own postal service and issued its own postage stamps, just as Tuscany issued its Tuscan lion stamps and managed their own postal services. 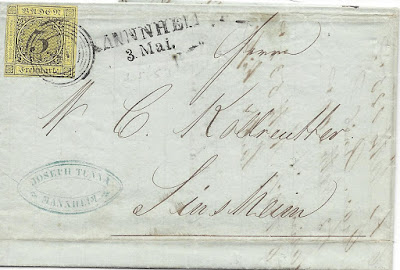 The monetary units in Baden at the time were based on the gulden where 1 gulden = 60 kruezer.  The units of weight measure were the pound and the loth where 1 pound = 30 loth and a single loth was roughly equivalent to ½ ounce.  The meilen, or postal mile, was similar to the Austrian leghe (7.5 km = 1 postal mile).

It just so happens that many of the German states and Austria had come to an agreement to implement a "postal league" in the early 1850s.  This agreement is known as the German-Austrian Postal Union (GAPU) to English-speaking philatelists or Deutsch-Österreichische Postverein (DOPV) to those who speak German.  In fact, this would be the model for the agreement Austria would have with the Italian states mentioned for the first letter in this blog post. 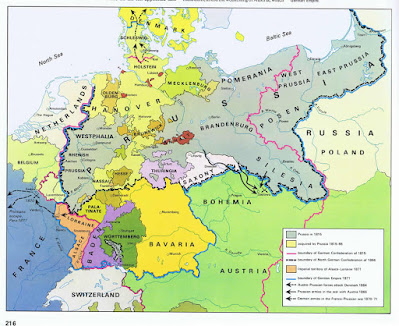 The map above gives you some ideas as to all of the political boundaries and some of their movement over time during this period for the German states.  You will notice that Baden is in purple towards the lower left of the map (just north of Switzerland).  By the time we get to 1875, Germany will be unified, including Alsace/Lorraine (French prior to 1870 and French in the present day).

If you look more carefully, you might notice that Baden, Wurrtemberg, southern Hesse and Bavaria were not part of the North German Confederation established after the Seven Weeks War in 1866.  These southern German states maintained autonomy over their postal services longer than most.  Baden ceased using their own stamps by the beginning of 1872, when they began using the postal service maintained by the newly minted German Reich.  Bavaria, on the other hand, continued to issue its own postage stamps until 1918 as an autonomous kingdom within the German empire. 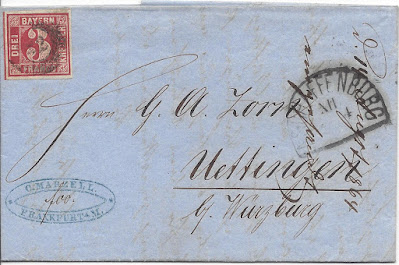 Shown above is a folded business letter with 3 kruezer paid by a Bavarian postage stamp in 1864.  The rate is the same as the letter in Baden.  The German-Austrian Postal Union was still in force and this letter must have weighed no more than 1 loth nor did it travel more than 10 meilen in the postal services.

But, there is something strange going on here!  The black marking at the left reads Aschaffenburg - which was in Bavaria.  The blue marking at lower left is a business hand stamp for C. Marzell in Frankfurt - which was NOT in Bavaria.  Frankfurt was in Hessian territory and would not have used Bavarian postage.  In fact, Frankfurt was more than 10 meilen from the destination, so this postage would not have been enough in any case. 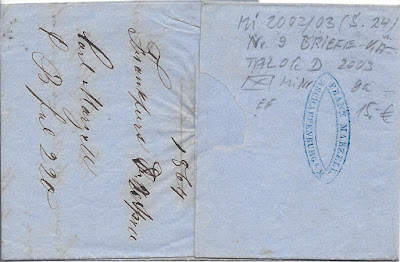 Sometimes it pays to have a relative with a business or a branch of the business in another city.  Franz Marzell was in Aschaffenburg, according to the marking on the back.

One of a two things happened (other possibilities exist but are unlikely).

And Ceylon Coffee was a Thing 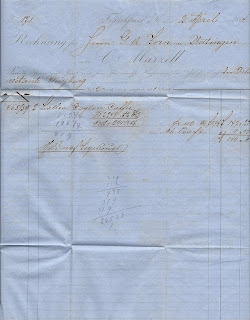 The contents of this letter mailed in Bavaria included an invoice for Ceylon coffee (‘caffee’) and reflects the popularity of coffee from that region in the mid-1860's.  In 1866 alone, Ceylon exported over 897 million pounds.*  In fact, the development of coffee plantations in Ceylon occurred in a way that could be likened to a gold rush, with primarily English speculators clear cutting the natural forests in favor of a monocrop system.

*according to Ceylon: A General Description of the Island, etc by H.J. Suckling 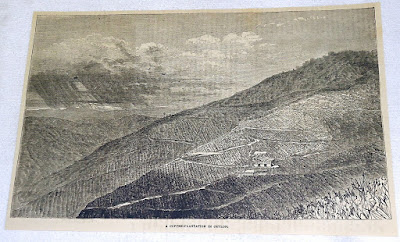 Above is an illustrated plate from an unidentified magazine circa-1880.  Offered as an ebay lot and not further attributed.

The soil in much of Ceylon was such that farmers would need to supplement the soil to maintain production, but few speculators were aware of this and lost a great deal of money in the 1840s.  After a peak of 1.6 billion pounds of export in 1868, production declined rapidly with the appearance of Coffee Leaf Rust over the next several years.  The spread of this fungus can be largely attributed to poor agricultural practices and the ridiculous dedication to a single crop with no regard for environmental balance.

And you wonder how I can link postal history to our farming blog?  It was a bit of a long road to get there, but I did it!

And there you have it!  A blog that starts in Florence, Italy, and winds up in Ceylon and a brief discussion about Coffee Leaf Rust (among other things).

If I were to summarize for you the take-away form this blog post it would be that postal history often has a direct link to the historical context in which it resides.  If you take some time to learn the basic history and look at a few maps from that period, you can more easily understand how a letter traveled and gain some insight as to why the post offices worked as they did.

But even if you do not learn the basic history so you can understand the postal history of an old letter, you may find yourself drawn into the history anyway.  After all, these letters have stories to tell, you just have to take the time to read them.

Have a great remainder of the weekend and a great week to come!