Tammy and I have relied much more on heirloom and open pollinated varieties for many vegetables over the years than most "commercial" growers.  Part of this has to do with our commitment to diversity on the land and on our farm.  Some of it has to do with a desire to support Seed Savers and their commitment to biodiversity and the conservation of heirloom seeds.  And, of course, a good bit of it comes from the enjoyment we derive from growing different types of vegetables - we often don't want to grow the types everyone else seems to be growing.  And, last but not least, we recognized early on that there is a wide range of taste possibilities that we miss when we rely on the most popular seed types. 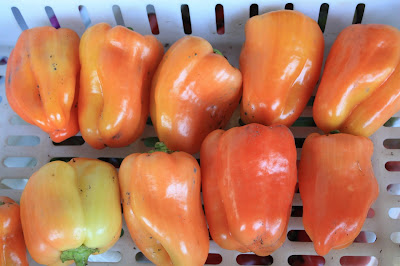 We have featured many of our favorite varieties over the years on this blog, with our Veg Varieties of the Year getting some attention from interested persons.  Last year was the first year in a long time that we did not create that list - and it felt strange not doing it.

Why didn't we create our veg varieties of the year list?  Well, we scaled back and moved to growing mostly our favorite varieties for one, so I suppose we'd just list what we grew.  And, for two, things were extremely different at the Genuine Faux Farm in 2020.  There just wasn't the same motivation to do that list - so we didn't!

Instead, I thought I would try my hand at a series of shorter blogs for Saturdays that feature different veg varieties that we have grown.  Let's see how far this takes us!

* (note, we did not grow an acre of these, but this is a standard measurement unit for production numbers)

The data above comes from a 2 year production period.  We have the raw data for other years, but felt this was enough for the time being.  The fruit per plant numbers were lower on these plants than they were for many varieties we grew during the same season and weight per fruit was slightly higher than the overall average.   However, the smaller sized plants allowed us to actually get our normal cwt/acre harvest level despite fewer fruit per plant.

These numbers only counted marketable fruit and did not account for fruit we identified as culls.

We first grew Garden Sunshine back in 2007 or so when we were looking for a bell variety that had some different color, was a smaller plant AND "held well" on the plant.

A fruit is said to "hold well" when the window of time that it is ripe and eligible to be harvested on the plant is expanded.  For example, if you grow lettuce in late Spring as the weather warms, you will find that a lettuce plant will reach a full size head quickly, but you won't have many days to harvest that head before the plant starts to "bolt" in an effort to produce seed.  If you grow lettuce in the Fall as temps are cooler, you will find that lettuce will "hold" at the mature size for many days - and sometimes several weeks - without bolting or losing its quality as a good-looking, edible plant.

With our status as a CSA farm, we needed to spread our production out rather than having a concentrated harvest period.  It was much more important that I could harvest 2 bell peppers per person each week than it would be to get 5000 peppers in one day for a bulk sale.  We needed to find varieties that held well so we did not have to harvest and store the fruit until we were ready to distribute them.  Garden Sunshine's fit the bill for our needs at that time.

It turned out that Garden Sunshine could be harvested when the waxy yellow/green color started deepening to a dull yellow, but you could wait until it turned into the orange-red colors you see above for the best taste.  We thought there was a bit of paprika taste to these fruit, which should not be a surprise since paprika is a type of pepper.  The color change for these remind us a lot of how other paprika peppers behave, so I would not be surprised if someone classified them as a very mild paprika spice pepper.

The plants were compact, not taking much space in the field and we could get anywhere from two to seven fruit per plant.  Size was variable, which would explain why a commercial grower who was interested in consistent shapes and sizes might not appreciate Garden Sunshine.  What you see in the picture is representative of what we saw over several years of growing them.

The pepper walls were on the thicker, crunchier side and they were quite dense - not giving too much of its weight to the seeds in the cavity.

From a marketing perspective, we found that people preferred the green, red, and yellow bells to Garden Sunshine, but there were nice compliments when we made sure each CSA members got a Garden Sunshine or two in their share and we asked for feedback.

Last year was the first time in a long time that we started none of these plants at the Genuine Faux Farm.  Part of the issue is the need to move pepper production into the high tunnels with drift issues removing the option for growing peppers outdoors.  We had to make decisions and simplify.  The other reason?  We are moving our model to wanting larger numbers of peppers ripe and ready at the same time now.  Garden Sunshine's strengths no longer fit our needs.

But, if you like growing some different things, Garden Sunshine could be an enjoyable surprise for you.  The color is very different and taste isn't the same as every other bell pepper.  The plants are smaller and you don't have to wait for that second the fruit is ripe to pull it off the plant before it gets over-ripe.

We hope you enjoyed this blog entry and we wish you a good weekend!  Be well!