Where is that Button?

I know it's there somewhere, I just can't seem to find it.  I've looked several times.  In fact, I've taken them apart, replaced lids, fixed floats, removed them and installed them.  But, I still can't find that @#@% button that must be somewhere on the toilet that tells people that my rear end just hit the seat and it is now time for them to call me.

I am, of course, talking about the toilet in our house.  No, wait!  I am talking about EVERY toilet anywhere I have ever bin since the time I added a cell phone to my repertoire.

Look, I don't get all that many calls and most of the calls I DO get are from a sunshiny voice who wants to tell me my auto's warranty needs my attention or Google business wants to take my money so I can reach more people.  There must be some sort of pressure plate on every toilet seat I have ever visited that sends an electronic signal to whomever was thinking they might call me some time. 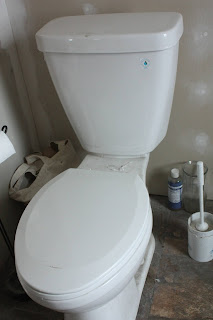 Of course, I am NOT going to answer the phone while I am in the restroom.  After all, that's MY business.  And, in case I should ever visit a public restroom and you are in there doing YOUR business AND still talking on your phone, I will find it within my rights to flush every available toilet and urinal as I walk by each one.  In fact, if I ever suddenly develop the talent to pass gas loudly whenever I want, I just might add that to background noise as well!

Hey!  Rob is in a meeting!  It's a great time to call him.  While you are at it, do NOT leave a message and make sure you use the phone number he doesn't have recorded on his phone.

Actually, now that I think about it, this might be a great money maker for all of the introverts in the world who aren't fond of talking on the phone.  Sign up to have people get notices to call you when you are NOT available.  Hmmmm.  I think I'm on to something here.

The board game, Wingspan, does not apparently have a sensor that contacts people to call when we play the game.  For that we are both grateful.  But, I don't think we are adverse to actually answering the phone when a game is in progress. 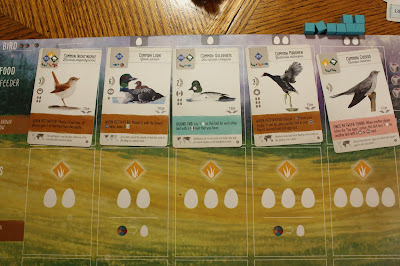 It is fairly well known that Tammy and I like this game very much.  We picked it up last year in December and we've played it an average of once a day, every day, since that time.

Yes, I know - it sounds crazy and maybe a bit obsessive.

Ok, it sounds a LOT obsessive.  But, we have a table where it can just sit out - waiting for the next game.  And, we try to make sure that we take some time to do something together.  Recent activities of choice have been board games (usually Wingspan) or watch a Poirot mystery.  Wingspan often wins because there is more interaction (though we often try to guess 'who done it' together with the Poirot mysteries).

Before I get too far away from the board I showed above - this is what I was dealt for birds in yesterday's game.  Note the names of the birds: Common Nightingale, Common Loon, Common Goldeneye, Common Moorhen and Common Cuckoo.

Yes, the deck was shuffled and yes it was randomly dealt.  I got a flush of the commons I did.

Heh.  Flush, see how I called back to the prior topic?  I am so very clever. 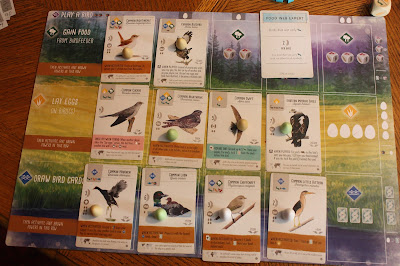 I got 80 points, which we consider to be an 'average' game.  I shouldn't be surprised, with everything being so "common" and all.

Who won?  Ummm... not me.  Someone else in our household got 102 in that game.  That, my friends, is not common. The 102 part is not common, that is.  The Tammy winning part happens about half of the time, so that's not uncommon!

After a couple of "serious" blog posts it was time to lighten things up a little bit.  So, I grabbed the camera and took a picture of our Christmas tree. 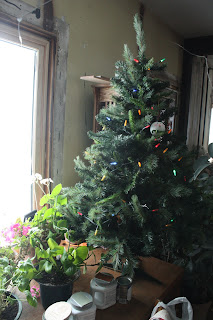 Yes.  It's still up - and I don't think we are inclined to take it down any time soon.  Why not leave it up?  The lights are cheery on days when the sun doesn't come out and/or the sun goes down early and comes up late.

And to close - A Story

Three crows loved to sit around in the alley behind the local butcher shop.  There was a fence that surrounded the garbage cans and a few other odds and ends.  These three birds would perch on the fence, or the handle of the push mower most days around 7 am because that was when the butcher would toss out the meat that had passed the expiration date.  After all, crow diets aren't regulated in the same way our are and they don't care if the label says the food is too old. 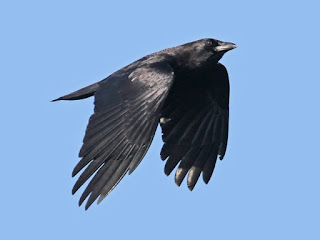 On this particular day, the butcher and his apprentice walked out with a bunch of sausages of all sorts.  As they walked to the garbage, the butcher told his apprentice, "We need to throw these so no one gets sick."  They tossed the sausages into the can and walked away.  The crows noticed that the apprentice forgot to put the lid back on.

"Hmmmm," said crow number one, "I think we've got a feast today!"

"Pffffff!  We've never gotten sick before, I'm going to go eat as much as I want!"  So, the first bird flew off of the lawn mower and landed on the trash can.  And he ate... and ate... and ate - while the other crows watched.   Eventually, the first crow belched and then struggled to fly back to his perch on the mower handle.

The other two crows sat there for a while longer - waiting to be sure that the first crow would be ok after eating all of the 'past date' sausage.  When it became apparent that he was likely going to be fine, the both flew off of the fence, landed on the edge of the trash can and ate... and ate.... and ate.

Once they were full, they both belched and then struggled to fly up to their perches on the fence.

After a while, the first crow roused himself and stretched a little.  "I'm going to try to fly some of this off - that was quite a feast!  Aren't you glad you listened to me?"

The other crows were so full they just kind of nodded slowly - but they didn't say anything in reply.

The first crow stretched his wings and took off.  He flew up off of the mower handle, up above the rooftops of the buildings that bordered the alley.  They could see him as he started to circle when suddenly....

There was a loud "POP" and the first crow exploded!   Feathers slowly drifted back down into the alley and down onto the ground.  A few even floated in front of the other two crows.

"Well, there ya have it!" said the third crow.  "He shouda knowed ya never shoulda fly offen the handle when yer fulla baloney!"

Email ThisBlogThis!Share to TwitterShare to FacebookShare to Pinterest
Labels: general strangeness and minions, time to have pun