Every once in a while, Tammy and I see something and say, "Hm, that might be interesting for other people to see on the blog."  Sadly, most of the time, we say this when neither of us is prepared to write it down.  As a result, there are a whole bunch of great ideas that fall out of our brains and rattle around on the floor.  So, if you see some of our ideas sitting on the edge of street somewhere, please direct them to us.

Genuine Faux Farm By the Numbers
Many of you already know that Rob likes his numbers.  Sometimes, the numbers actually interest other people as well, so we thought we would share a few that might be enjoyable.

We have a great post about the ladies that answers a number of questions about how we raise the birds and we point you to the Poultry Slam post from 2015 as a starting point.

41,500- the approximate number of cucumbers harvested on our farm since 2006.  Yep, that's about 3000 a year.  All that time picking cucumbers and wondering when the cucumber frog is going to startle the farmer...

164 and 11.1 - the number of songs a typical Genuine Faux Farm music play list contains and the number of hours that playlist would normally take to play in its entirety.  Our most recent playlist is actually only 95 songs and 6.4 hours.  We attribute that to the PAN job and all of the Zoom meetings Rob has been attending over the past several months.  It turns out, turning up music by the Choir or King's X or Apocalyptica only makes these meetings more difficult for most people.  Me?  I think we'd get more done - but that's probably my introverted nature speaking!

75 - the number turklets we intend to order for our farm in 2021.  Tammy actually presented on the topic of raising turkeys for the 2021 Practical Farmers of Iowa annual conference.  Many people think turkeys are very difficult to raise and the reality is that turkeys are a much higher investment per bird, so you feel the loss of one far more keenly than you might a broiler chicken or a laying hen.  Still, we've gotten pretty good at it over the years and we enjoy the birds (most of the time).  Good enough reason to keep at it.

Of course, we should also remember the collective amnesia farmers have this time of year with respect to some of the hard work and the issues they must deal with during the growing season.

Once upon a time, there WERE foxes on the Genuine Faux Farm


In 2007/2008, after the old hog building came down, a vixen decided we had the perfect place to raise a few kits.  We were able to get a few pictures and were also able to contact photographer, Kip Ladage.  Kip came out and got some great pictures (one of which is signed and hanging on our kitchen wall).  Once he had captured his photos, we went about our normal business of farming.  This was too much for Mama and she moved the kits away soon after.

Frankly, if they would have signed a contract stating they would not kill all of our chickens, we'd have been happy to have them stay.  But, having us as their neighbors was just a bit too close for comfort from their perspective.

I'm not sure how we should feel about that.

That old barn was good for something 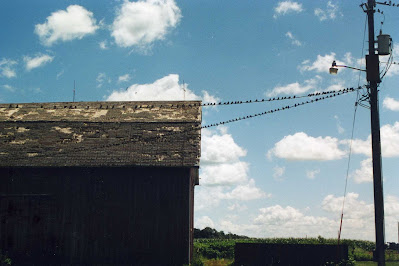 Those who have been to the farm over the last ten or so years, but not prior, have not seen the old barn with a roof and siding.  When the barn was still largely intact it was the perfect nesting space for barn swallows.  There were always two major hatchings of chicks and once they fledged we'd get to see the grand line-up on the electric lines.  Sadly, with fewer nesting spots and other issues having to do with the decline of our wild birds, we don't get to see this any more.

Both of us feel that the decline in swallows corresponded with the increase in Buffalo Gnats on our farm as well.  It's almost enough to make us build a barn just for swallows.  The problem is - we know it is not just the absence of the barn.  The number of swallows nesting in our granary and the Poultry Pavilion are also down from prior years -and some of the old barn still stands, but does not seem to support much more than one nest.

The acrobatics of all of these young birds was something to see those first several years at the farm.


The year the cucumbers would not grow

The farm is full of lessons of humility.  One of our earliest such lessons came in 2008 when we had a year where one of the 'easiest' crops to grow simply wouldn't.  The following year was a bit better, but 2010 was the year of the cucumber, when we harvested well over 7000 fruit.

There are still a few people who read our blog that will remember the year of the cucumber in their CSA shares.... I hope they have forgiven us.

You Did What When?!?


We thought we could end this post by high lighting a couple of other posts that tell you some stories about each of us.  Take each link and enjoy!

Young horticulturalist?
Would you like your plants to get big and healthy this year?  Diligently prune off the flowers just as Tammy did in her family's garden.  Just remember that you won't get any fruit if you take off ALL the flowers.  But, then again, if that's the goal you want....

Deliveries by Rob started earlier than you think.
Officially, the Genuine Faux Farm started operations in 2005.  But, the very first deliveries were made years earlier - even before Rob and Tammy met.  The produce came from the 'garden' Grandpa Faux maintained and he was happy to have a high school baseball player available to run the gauntlet that were essentially 'drive-by vegetablings.'

This post is loosely based on a fun post published on February 23, 2018.  As I was doing a quick look for "throwback" candidates, I felt compelled to do some updating and modifications to this one.  Yes, some of it is similar to the original, but there is sufficient new material to keep it fresh.

Have a good day everyone!

Email ThisBlogThis!Share to TwitterShare to FacebookShare to Pinterest
Labels: Paint by Number, Throwback