I've been struggling to get things done of late and have been having more than my normal number of stress dreams - most are not as entertaining as this one was.   Part of it has to do with fewer hours of daylight/sunlight - it's just a normal cycle for me that we always work to address (no - I am NOT looking for suggestions here, so keep them to yourselves for the time being).  Another part just has to do with the normal vicious cycle that comes with not completing tasks and adding new ones on top of it.

And, the rest is mostly just because I am human.  I'm not always happy.  I make mountains out of mole hills.  I let other people's anger and discontent depress me sometimes.  I also wonder why I bother putting it in a blog.  And none of this has to make sense, either. 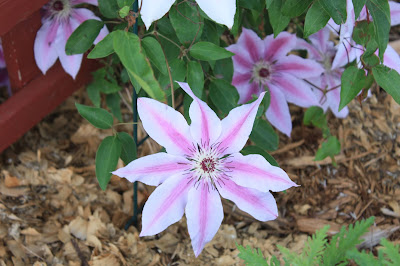 When I feel a bit down, I try to dig around deeper so I can find some of the good things that I have buried.  Not unlike the Clematis flowers that open near the base of the plant or... perhaps next to the trellis where we have to move a few leaves to see them.

I am pretty sure that they are there... somewhere.  But, I don't always have the energy to do that sort of digging. 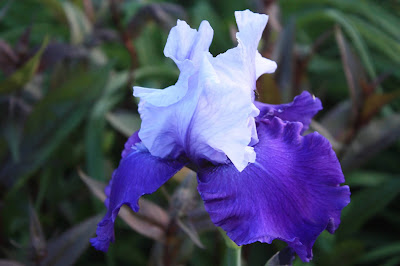 That's why I sometimes need a bold statement.  One that stands out like a German Bearded Iris.

I may not have the energy for subtle and perhaps it will work to just hit me with something grand and beautiful.  But, sadly, this does not always work.  These ostentatious blooms might feel a bit like they are trying too hard to impress.  It's almost as if they are saying, "You are not allowed to feel down - smile!  Or else!"

I suspect that those who know me will tell you that this is NOT necessarily the best way to turn my mood around. 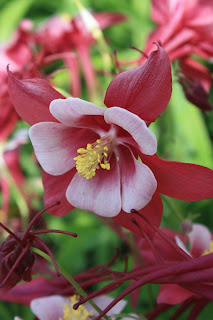 Perhaps what I need is something in between.  Something that stands out, but it isn't quite so overpowering?  Maybe a Columbine?   Each healthy plant usually has many flowers open at once and you take the plant and its flowers as a whole.  It's almost as if the flowers are saying, "Hey!  We're all happy to be here.  Maybe if you joined us you would cheer up some?"

There are times when this works too - just like the other two.  But, sometimes, a person actually starts feeling a bit trapped when everyone around them seems to be doing just fine.  If not trapped, then maybe isolated because you feel like you're the only one feeling as you do.  It's a reminder that feeling sad is ok sometimes and that being told you shouldn't be sad isn't the way to turn things around. 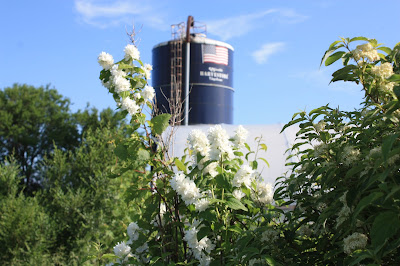 The Mock Orange tends to get my attention first when I pick up its aroma as I walk by.  Again, there are many flowers open at once.  Unlike the Columbine, where a single flower can captivate you as much as the group does, the Mock Orange relies on the group and your sense of smell to entice you to smile in appreciation.

But, if you're feeling a bit cynical at the moment it tries to capture your attention, you might find yourself saying, "Nice try, Mock Orange!  But, I am not in the mood for sweet smells and bright flower petals.  Even if you are putting yourself right next to the path I walk from one farm task to another." 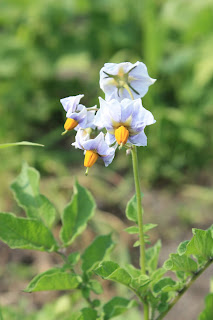 Maybe what I need is something a bit more practical.  Potato flowers normally come in clusters, but it isn't a huge bunch of flowers on a stem.   Their presence typically signals some of the next steps in plant development that will result in some tasty tubers in a month or so.

A promise of good things to come, brought forth by a good thing now.  A little companionship that comes with the cluster of flowers, but no tendency to overwhelm with numbers or with drama.  Maybe that will work for me now?

Except, potatoes at this stage usually also bring work, and I was having trouble getting everything done as it was.  Apparently, I think too much, because the potatoes almost got me. 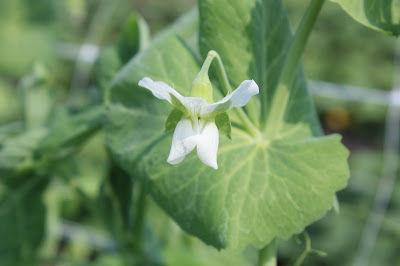 Well, let's try the snow peas instead?  The flowers are delicate and quite beautiful when you take the time to observe them.  They promise tasty peas in the not too distant future.  In fact, you can often view a flower and munch a pea at the same time.

Maybe.  Just maybe?  Yeah.  But, harvesting peas take a fair amount of time.  So... maybe not? 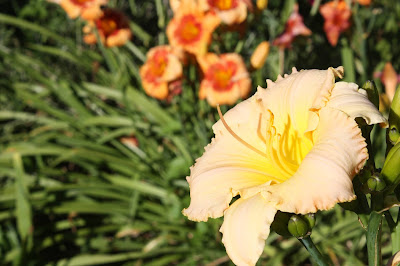 What about a chorus of day lilies?  Yes, they are a bit ostentatious, like the iris.  They typically come in groups, which means they could be a bit overwhelming.  But, they, like sunflowers, are captured rays of sunshine that glow on a bright day and bring out the light on a dark one.

This is the part where I realize that sometimes I actually need a little bit of all of these flowers.  It's not that I am demanding or anything, it's just that I know I can get a boost in so many ways.  I just have to accept the help as it is offered - taking what I need and leaving the rest for someone else who might want it. 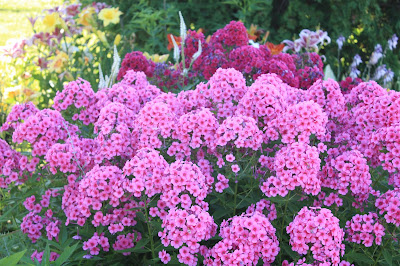 Throw in some bursts of Garden Phlox and few spikes of Culver's Root and it starts getting pretty difficult to keep a small smile from showing up on my face.  Yeah.  That does look pretty nice.

And so do the other pictures in this blog.

It's okay to be sad.  Just like it's okay to feel better after the flowers try to coerce you into improving your mood.  But, even if it doesn't help right now, the flowers won't be offended.  They'll just keep doing their thing in the hopes that it might help when you are ready and able to receive that help.

I'm good with that.