Welcome to our Saturday Variety Show post where we feature a veggie variety we have grown at the Genuine Faux Farm.

This week we're going to take a look at one of the potato varieties that we have grown over the past few years - Adirondack Blue. 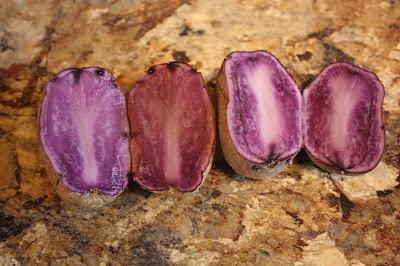 Potato production on the farm has been one of those love/hate things for many years.  If you have a successful season, potatoes are a great crop to have a surplus of no matter how you sell them.  You can see the attraction.  Most people in the Midwestern U.S. like potatoes and potatoes are easy to store.  That means we could have a popular crop that can be sold or included in CSA shares over a long period of time.

On the other hand, with the number of crops we have grown and the organization of our labor, getting a truly successful potato growing season can be elusive for our farm.  With our heavier soils and wet seasons, we often have trouble for a whole host of reasons.  In particular, the times when we need the labor has often been when we did NOT have available workers beyond myself (Rob).  Sometimes, you just can't do it all.

A typical plan in the past was to buy 250 pounds of potatoes for seed (usually five varieties) and hope for a tenfold return in production (about 2500 pounds of tubers).  We had settled into growing Purple Majesty, Mountain Rose, Rio Grande, Carola and German Butterball for many years - and then, availability of the first three forced us to go looking once again.

While we still hope for a 10 to 1 return on the seed weight, we have reduced our production numbers significantly.  This year we only ordered fifty pounds of seed potatoes in two varieties (Adirondack Red and Adirondack Blue).  We've proven year after year that we can handle the row feet required for about 100 pounds of seed potatoes even in the most difficult of years.  It's the row feet after that where we've run into problems if additional challenges are placed on us.  At least that's our story and we're sticking to it! 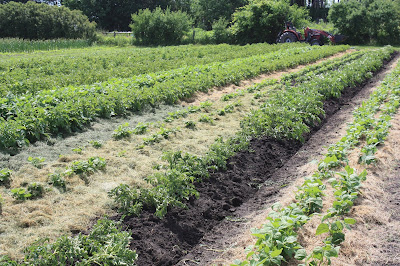 Above: some Adirondack Blues after hilling, with grass mulched green beans in adjacent beds.

Adirondack Blue is a blue fleshed (or purple flesh if you prefer) variety that maintains its color even after it is cooked or baked.   Some colored potato varieties go a little gray or lose much of their color when they are cooked, so we consider that a plus.  Adirondack Blue serves well for all preparation methods.  The larger tubers do just fine as baked potatoes, you can cut most sizes into rounds or wedges for fries or you can make mashed potatoes - and before you make a face about BLUE mashed potatoes, let me tell you that it is actually a very attractive blue color.

And, these potatoes really taste quite good!  In contrast to Purple Majesty, our prior favorite for blue taters, Adirondack Blue tends to be a bit more moist, making them a better candidate for mashing.  We've taken to doing a large pot of them, just for the two of us and having leftover mashed potatoes through the following week with our meals.  It's actually a nice treat, as far as I am concerned.

Colored Potatoes May Have Health Advantages

I am NOT going to pretend to be a doctor, nor am I going to fall prey to the hype many sites are throwing out there about the health benefits of colored potatoes.  What I can tell you is that there are a few studies that indicate that they ARE more healthy than non-pigmented (white) potatoes.  The argument is that

"Pigmented potatoes contain high concentrations of antioxidants, including phenolic acids, anthocyanins, and carotenoids.These bioactive compounds have been implicated in the inhibition or prevention of cellular oxidative damage and chronic disease susceptibility."

The study that provides this quote in their abstract introduction concludes that:

It's not that I think colored potatoes are the next 'health food,' but I do believe that they can be a viable alternative to some of the starchier varieties for those of us who do love our taters!  It doesn't hurt that they may be healthier for us AND they taste really good. 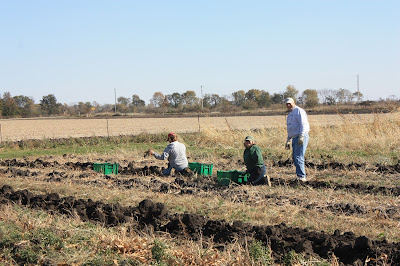 Above: picking up potatoes after the underminer lifts them up

Last season, a 100 foot row of Adirondack Blue produced about 270 pounds of tubers for us, which is well over the 10 to 1 ratio we like to target.  However, we have to balance that with another section of Adirondack Blue that had difficulties with moisture (and then weeds) at another part of the farm.  So, our actual ratio for purchased seed was lower than 10 to 1.  The point I am making is that the potential for a good return is there.

Tubers are typically moderate sized with a few good baking sized potatoes thrown in for good measure.  No one will confuse these with a Kennebec or a large russet type that people associate with the traditional baked potato.  On the plus side, I have not noticed many "pebbles" that some varieties seem to have at harvest time.  Skin color is darker, which can make potatoes a little harder to see in our nice, black soil.  However, we have an easier time with these than we did with Purple Majesty.

Another good quality is that we haven't seen too many irregular shaped potatoes that some varieties throw, especially when there are wild swings in soil moisture during the growing season.

Plants are robust and have what I would call a more upright habit and they seem to be less susceptible to Colorado Potato Beetle than many of the varieties we have grown (showing more resistance than Adirondack Red as well).

While we are coming to the end of our stored Adirondack Blues for eating from last year, we are very much looking forward to growing this year's crop.  We've already put a 75 foot row in and we still need to put the rest in the ground.

Thank you for joining us for the Variety Show on a Saturday.  We hope you have a great day and remainder of the weekend!