Tools We Could Use?

I have been considering re-reading the Harry Potter series in the not too distant future as a sort of "comfort read."  I don't think I am alone among people who sometimes prefer reading a book they have already read.  This is especially true when I am under some stress or if I can only read in short bursts.

It makes sense to me.  The cadence of the story is familiar and, perhaps, soothing.  I can control the level of suspense because.. well, I've already READ it (duh!).  And, I can always discover some new details with each read.

My standby, over the years, has been the Lord of the Rings by J.R.R. Tolkien.  But, I have many others that I have "re-enjoyed" as well.

There is a bit more comfort with the Harry Potter series because, especially early on, there is a certain light-hardheartedness that comes with a book written about and for twelve year-olds.  The opening of the first book is the type of beginning that encourages you to sigh and then squirm a little as you settle into your favorite chair for a nice read. 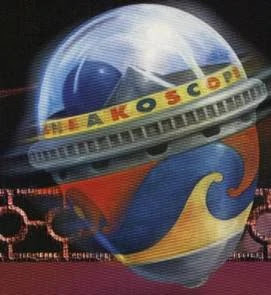 The Harry Potter "universe" introduces a few interesting tools that I like to muse on every once in a while when my brain needs a break from heavier matters.

In both cases, J.K. Rowling, the author, doesn't miss the trick that each tool has its limits.  You can have something that tells you that you are forgetting something, but it certainly doesn't help you remember exactly WHAT you've forgotten.  And, a Sneakoscope isn't going to help a whole lot if you can't identify the source of the sneakiness.  If you think about it, the Sneakoscope could actually BECOME the problem.

But, in my mind, the real winner came to me as I was looking in the mirror (not something I do often), trying to figure out what was in my eye.

Another tool in the Harry Potter books is a "Foe Glass" which supposedly shows how close a person's enemies might be.  If an enemy is some distance away, there would be a very shadowy and unclear image.  As a "foe" gets closer, the image becomes clear.

As I mused about this, I realized I was looking in a Foe Glass.  My own worst enemy was staring back at me...

with a finger in his eye.

Have a great Friday and a good weekend everyone!