Welcome to our Saturday Variety Show post where we feature a veggie variety we have grown at the Genuine Faux Farm.

Yesterday, I took the time to remove the covers we put over our crops in Valhalla, the larger of our two high tunnels.  You see, we had some cold (down to 22/23 degrees Fahrenheit) weather that could put those crops in jeopardy and I wanted to do my best to keep them going.

I pulled the cover off of the row of peas we are running in the middle bed and was pleased to see the three inch tall starts looking very healthy.  That gave me the motivation to write about Blizzard snow peas (because that is exactly the variety I have planted out there right now). 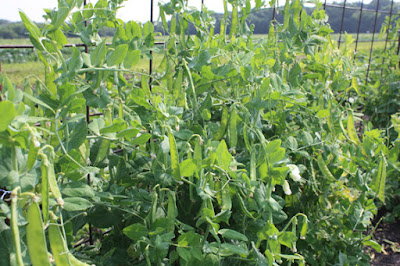 The Year that Set the Bar

One of the most difficult things about farming like we do is the fact that we have never felt that we have had that ONE year where everything seemed to go well.  That's our fault, because we grow so many crops and so many successions of our crops that there will always be failures - and it can be hard to balance the failures with the successes.

However, 2015 was a pretty good year overall AND it was THE year for peas at the Genuine Faux Farm.  We were growing four varieties (Oregon Sugar Pod II, Golden Sweet, Mammoth Melting and Blizzard) and all four did remarkably well.  A fifth variety, Cascadia, actually failed to germinate.. .so I guess it wasn't perfect.

Our workers were dedicated to making the crop work (as were we).  We got them planted at the right time, weeded at the right time and trellised on time.  We stayed on top of the harvest and... well, it was just a really good year for peas.

We had 450 row feet of peas in the field that germinated and we harvested 445.4 pounds of snow and snap peas (no shelling peas). You need to remember that we do multiple harvests on our farm - this is not a harvest one time with a machine operation!  Even so, we are more used to saying we had a good year if we get about a half pound per row foot versus the full pound we got in 2015.

Blizzard came in at .86 pounds per row foot, which was lower than others in the mix.  But we still gave it the nod as the best snow pea of the batch for two reasons:

Blizzard actually ended up being our number 1 veggie variety in 2015, beating out a number of worthy competitors.  As I reviewed that list, I realized that 2015 might have been our best growing season in our history.  If only I'd known how good it was at the time! 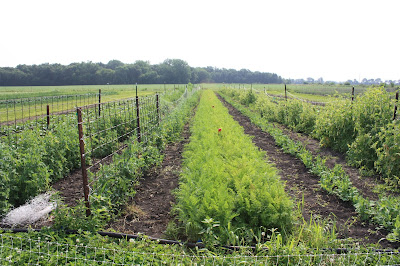 Why or Why Not Blizzard?

I would like to be able to say that Blizzard has done well for us every season, but that would be an untruth.  There were a couple of instances where the variety was not available to us and we tried to use old seed - which did not work.  There was another year where most of the row of Blizzard peas were not trellised in time and we just gave up trying to harvest them as thoroughly as we should have. (sometimes you have to make choices with your limited labor hours)

But, when they're good, they're good.  Good enough that I purchased too many seed the last time they were available and took care to store them well so I could have them available.  Now, I am even considering planting a few rows so I can save the seed.

Unlike some snow pea varieties, Blizzard does seem to have a peak harvest flush where you could probably pull in most of the harvest in a ten day period.  But, it does have enough of a spread that this is not a deal breaker if you need a longer harvest period for CSA or farmers market.  Since our farm is changing to needing smaller harvest windows, Blizzard fits us well.

Vines are typically four feet tall and do require a trellis.  If you let them do what they want, you'll have a terrible time keeping them cultivated and harvested.

Vines have strong tendrils and don't tend to let go once they've got a hold of a trellis.  Peas are usually held out away from the vine and they have fewer peas hidden in the depths of the vine.  If you are growing several row feet, this is a huge labor saving characteristic.  Both Mammoth Melting and Blizzard tend to do this, which was part of the reason why we could keep up in 2015.

Blizzard is a bit less tolerant of heat than Oregon Sugar Pod II (which we think is the best for this), but we are usually transitioning to green bean harvest by the time Blizzard finishes.  From a labor standpoint, this is perfect for us.

Thank you for joining me for another offering of our Variety Show on a Saturday.  I hope you found it helpful or interesting.  Whichever fits your need at the moment.

If you have questions, corrections or suggestions for another veggie type you would like us to feature (we get to select the variety) let us know.