Fighting to Wake Up

There was this odd roaring sound and I remember hearing my name being called.  It was a voice of someone I loved, and she sounded scared.

I opened my eyes and nothing made sense.  But, I still found enough voice to say something... I don't remember what.  That seemed to be enough to help.

I made a move to get up and someone told me to stay still.

This is foolish, I can just get up, can't I?  Then I realized that the windshield in front of me was a rumpled and wrinkled web.  That can't be right.  What's going on? 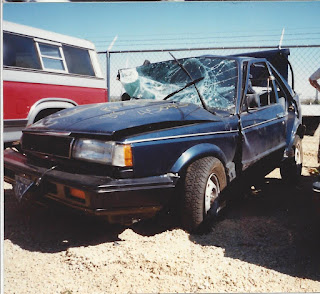 It was one of those gorgeous Fall days in September where the sky is the deepest of blues, there's just a few puffs of breeze and the temperatures were a bit above the norm.  A perfect day to drive up to Decorah and pick up my soon to be partner for life so we could head up to Shakopee and the Renaissance Fair.

We'd been there the previous Fall and I'd really liked it, so Tammy agreed that it seemed like a nice way to celebrate.  We had a cooler in the back seat with some lunch and probably some iced tea.. I don't remember for certain.  The route was familiar, the companionship was comfortable, and it was a beautiful, lazy day.

As we approached Chatfield, a town we knew to be the home of a respected Social Work professor, we were both fighting a little bit of the "sleepies."  So, I put in some music to help me stay awake, but didn't make it too loud so Tammy could relax if she wanted.  A quick gulp or two of iced tea and we were entering the town.  I noticed the familiar landmarks of the town and...

I was fighting to wake up.  There was this odd roaring sound in my head.  I heard a voice of someone I loved.  I spoke. I opened my eyes and nothing made sense.... 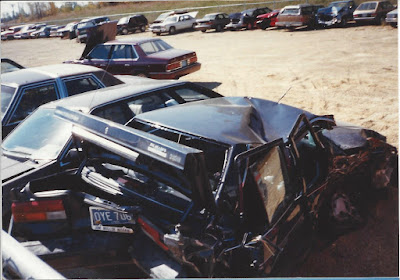 I was placed in the waiting ambulance and told to lie still.  Someone put their face in front of mine and told me that I had been in a car accident and that Tammy was taking different transportation to the hospital.  They couldn't or wouldn't tell me much else.

After a little while all I remember is that my body began to rebel.  My muscles were shaking and forcefully contracting.  So much for lying still.  I wanted to apologize, but my teeth were chattering.  They told me I was going into shock, so I started to focus on trying to get my body to STOP that silliness.  At first it didn't listen, but it eventually subsided.

I remember lying on the gurney in the E.R. for what seemed a very long time.  I seem to recall that I was given some sort of a scan and then I was carted back to the same curtained area I had started in when I arrived. 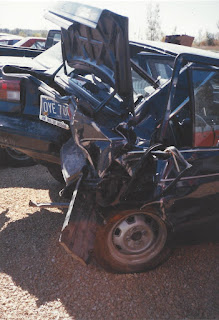 A police officer comes in.  He looks at me and I see something that is either disgust or ... something... in his eyes.  He asks me what happened and I tell him that I don't know.

We start going through the details about me.  I can tell him my phone number, where I work, my social security number - or whatever other vital information I was supposed to give.

That look in his eyes grows more intense.  He asks me again, a bit more forcefully - what happened?

He doesn't understand that I am desperate to remember.  I want to yell at him that I am frustrated because I can tell him all sorts of inane details, like my childhood phone number, my ACT and SAT scores, the date I started my job at Rockwell-Collins - but I could NOT seem to recall anything about recent events.

All I could say is that I thought I could remember Chatfield.  Was it just south of Chatfield?

I knew he thought I was lying.  I had been judged and been found wanting.  And I wasn't sure why that was - but now I knew I must have fallen asleep at the wheel.

Lie still.  Don't move.  Stew in your own guilt.

Maybe I don't want to remember. 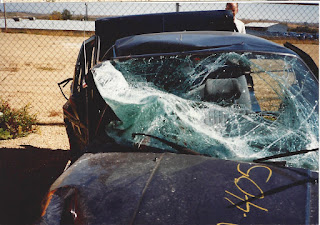 It was odd.  Nothing really seemed to hurt except for... well, it felt like I was lying on a bunch of rocks.  And, it was getting uncomfortable.

Eventually a nurse came in, looked a little startled, and said, "Hasn't anyone come in here to help clean you up a little?"  My reply was that the last I had heard, I wasn't supposed to move....

She was very apologetic and let me know that there had been a rush for the E.R.  The good news, it seems, was that I had nothing serious wrong with me.  A broken collar bone and what would likely be a body full of bruises.  The scans had shown nothing to worry about with the head and neck.

I had to beg to differ.  I told her I couldn't remember what happened.  She told me that was normal and I should be patient.  They let me know that Tammy was going to be ok, but she had received a pretty nasty cut to the head and had taken a helicopter ride to the hospital.  I think it was good that they had just told me she was being taken care of and skipped the details earlier....

As she helped me to sit up, I heard things falling to the floor and she looked surprised and startled again.  I looked down and saw numerous little squares of safety glass... everywhere.  It was in my hair and some trickled down the neck of my shirt.  I had been lying on a bed of broken glass.

Again, she apologized.  I told her that if others needed her help more and I could wait, I could certainly deal with discomfort.  Miraculously, I had nothing more than a few pinprick cuts from all of that glass.  No harm.  No foul.

Another person came in and they helped me get rid of the glass.  I couldn't use my right arm to help and it was kind of embarrassing to have to have help getting glass out of my shirt and the back of my pants.

They put a harness on me to hold my shoulder in place.  And, of course, the barrage of confirmation questions followed.  What's your name?  Where do you live?  What's your birth date?

They both looked at each other when I gave them that last answer and said, "oh."

"Yeah.  Happy birthday to me."

Eventually, most of my memory leading up to this accident returned.  I remember going through Chatfield.  I remember coming around a turn and going up a hill, noticing a few cars that had come to a stop.  Someone wanted to turn left at the top of the rise and, obviously, there must be approaching traffic.  I took a quick glance in the rearview mirror and noted a car just entering the base of the hill - still quite a ways back.

I eased into my place in the queue of cars waiting for the oncoming traffic to pass.  I slowed down and even coasted a little, tapping my breaks - with plenty of room between me and the next vehicle.  I had come mostly to a complete stop.

I remember glancing over at Tammy.  Her eyes were closed and she had her legs up on the dashboard.  Something she liked to do then and something I know now is dangerous to do - especially now that we have airbags.  Yet, it saved her legs that day.

At some point soon after, the roaring starts and .... I was fighting to wake up.  I heard my name....

The newspaper clipping from Chatfield announced that we were the first people to receive the dubious honor of having the "Jaws of Life" used to get us out of the vehicle (probably some of the roaring).  They had just received them not long before that September day.  The clipping also noted that we were wearing our seatbelts and that they saved our lives.

They also reported that I had not noticed the stopped cars and swerved into the oncoming lane to avoid them - only to meet a pick-up truck going the other way.  Well, that explains the judgemental looks and disgust.  Another stupid, young male driver that wasn't paying attention and made a bad decision.

I hadn't fallen asleep.  I didn't cause a crash that resulted in someone I love being extracted from the vehicle by the Jaws of Life and then flown via helicopter for treatment.

And I didn't deserve the looks I got from people who thought otherwise at the time. 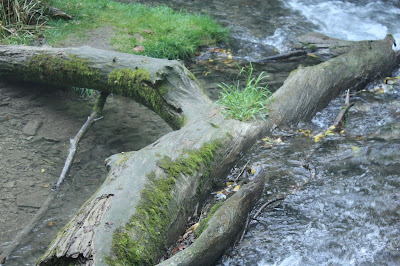 Why Write This Particular Blog?

How many times a day do each of us jump to an undeserved conclusion about someone or something?  How often do we make an incorrect assumption based on a particular characteristic?  This time it was young, male = irresponsible & dangerous behind the wheel.  Next time is it black, male = likely to stick a knife into me?  Is it Asian, female = probably a sex worker?  You fill in your own blanks - then ask yourself how you can change.

We can't deny it - we all have tendencies to make quick judgments.  There are times when it could be a good thing - possibly keeping us out of a dangerous situation.  But, when you let it be the final word, it isn't so good anymore.

How often do we actually take the time to learn more about a person or a thing and give ourselves the opportunity to correct ourselves when it becomes clear that our initial conclusions were wrong?  It's a rare thing and it requires an awful lot of effort (often by someone else) to get us to reconsider.

The Chatfield paper may or may not have corrected the story on a later date.  At best it was a little "correction" on page 9 - buried in column three.  But, it was old news and no one cared now.  I had simply confirmed the stereotype and there was no reason to reconsider.  At least I had people who stood up for me and advocated for some review that revealed the truth of the accident.  The official reports eventually reflected the facts as they were discovered.  I have little doubt that the final accident report would not have changed if there hadn't been a push to investigate further.

I write this blog post because rural EMS services were there to take care of us when a serious accident happened.  They had been able, via donations, to secure a critical piece of equipment to extract us from the vehicle.  Today, there is a bill that resides in the Iowa Senate that would make rural EMS services a required service - thus securing funding.  If we don't do something, there won't be an EMS to save the next person who wakes up, confused, with a web of windshield glass in front of them. If you live in Iowa, contact your state senator.  Last I looked this was the bill being considered.

I also write this blog to remind us all that there are times when a person cannot and should not be expected to be at their best.  This is when compassion, rather than confrontation... or judgement... is needed.  There will be time enough to deal with business.

Sometimes the voice of someone you love can make all of the difference in the world.

Email ThisBlogThis!Share to TwitterShare to FacebookShare to Pinterest
Labels: a crate full of grateful, dangerous pastime, I AM a protester, Look in the Mirror