Here is another example of the kind of work I do for the Pesticide Action Network.  Yesterday, I shared the contents of the most recent Iowa News that I put together for those who have signed up to get PAN mailings and live in the state.  Today, I share with you what a blog looks like when I write it with the PAN "organizational voice."  Essentially, all that means is that this blog is published with no particular author noted.  But, it also means that some of the flexibility that comes along for the ride when I write with my "farmer voice" goes away.  I am now "officially" speaking for... or maybe as... PAN.

The difficulty, for me, with this one is that it focused on a pesticide for citrus - crops I am not terribly familiar with the processeses used to raise them.  But, I learned a fair amount.  The next difficulty is that I have to be much more concerned with brevity.

The best thing about this blog is the ending.  We received good news just as this was being published on the PAN website.  That, of course, required changes to the content (again), but I'll be glad to just have the good news. 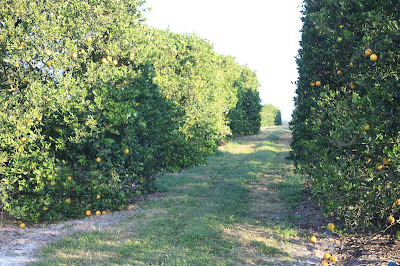 Aldicarb, a pesticide that has seen minimal use in the United States over the past decade, was re-approved for use on citrus crops in January, after a rushed process that barely accommodated the legally mandated public comment period for the re-registration of the chemical.

The new registration will allow 100,000 acres of citrus to be treated with up to 2.5 million pounds of pesticide products that contain aldicarb.  This will put a pesticide that is classified as “extremely hazardous” by the World Health Organization into use, raising the risks of groundwater contamination, accidental ingestion with food products, and direct exposure to orchard workers and wildlife.

History has the answer

In 2010, Bayer and the EPA agreed to end the use of aldicarb in the United States after finding that its use put infants and young children at risk.  In particular, the application of this product on citrus crops and potatoes provided the most likely vectors for exposure.  Bayer agreed to cancel the use of aldicarb products on citrus immediately, while the use of this product on other crops was to be phased out over a longer period of time.

AgLogic, the sole remaining producer of aldicarb pesticides, applied soon after for registration of aldicarb for a small subset of other crops, such as cotton and soybeans, which was granted.  AgLogic tried to expand on this by seeking approval for aldicarb use on citrus crops in Florida in 2017, but was denied when they failed to show that aldicarb was a superior product for controlling pests than alternative products with better safety records.

The use of aldicarb in the United States has been low since the phased ban that started in 2011, but the chemical was still detected in drinking water in six states from 2015 to 2017.

Irresponsible use of a dangerous pesticide

Aldicarb is a known neurotoxin and a suspected endocrine disruptor.  Exposure can cause acute symptoms such as dizziness, blurred vision, tremors, vomiting and, potentially, death in extreme poisoning cases.  Normal brain development can be impaired if infants or children are exposed to this pesticide.

If we check with PAN’s Pesticide Info database, we find that Aldicarb is also known to leach into groundwater, contaminating drinking water.  In addition to all of that, this pesticide is also a known bee/pollinator toxin.

Pesticide Info’s global ban map shows that the concerns about the risks of aldicarb are widespread.  At this time, over 100 nations have banned the chemical, realizing that the risks of this pesticide far outweigh any benefit it might provide. 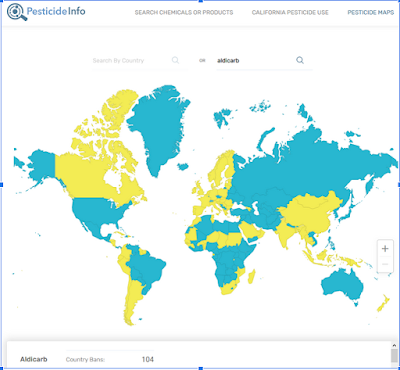 History shows us that the use of aldicarb is a bad idea and most of the world is paying attention and has agreed that it should not be used.  The recent move to return to approved use in the U.S. simply defies logic.

Pushback has been swift following this misguided decision. Our partners at the Center for Biological Diversity and the Farmworker Association of Florida, along with the Environmental Working Group, have filed a lawsuit to oppose EPA’s rushed re-registration of aldicarb.  And on March 12, PAN delivered 22,863 signatures to Administrator Regan calling for quick action to ban or restrict some of the most harmful pesticides on the market, which would include aldicarb.

While PAN and partners work to protect our people and the environment by reversing the new approved use on citrus crops, we have our sights set on the long term solution — joining most of the rest of the world and banning aldicarb’s use entirely.

The Florida Department of Agriculture and Consumer Services denied AgLogic's request to allow the use of aldicarb in the state on April 21, despite EPA's allowance for the chemical.  With this denial, FDACS stated that "aldicarb poses an unacceptable risk to human, animal, and environmental health in Florida, is one of the world’s most toxic pesticides, and is banned in more than 100 countries."  We celebrate this news with renewed resolve to push further toward a full national ban of aldicarb.