Welcome again to Postal History Sunday on the Genuine Faux Farm blog!  This is the time every week where I get to take a look at something I enjoy and in the process, we all might get to learn something new!

Let me remind you that I am always happy to take questions/corrections on past Postal History Sunday blogs and requests/suggestions for future blogs.  It does not matter if you are merely amused by the fact that someone would even bother collecting these old pieces of paper or if you are one of those people who do collect them.

Now it is time to take those troubles and worries with you as you fill in the hole for the old outhouse.  Throw those troubles right in there before you cap it off.  Remember, you should not flush them down the toilet.  If you live in the country, septic tanks can have enough trouble without you adding to it.  If you live in the city, the city sewer people really frown on people flushing things down the tubes that don't belong there! 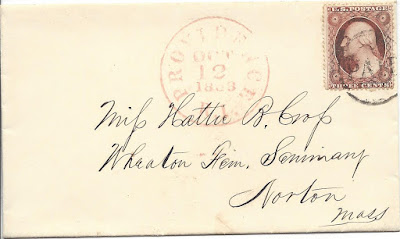 Eh... if it's confusing, we'll just call it fun and leave it at that!

I almost always start by looking at the postal markings and the stamps (if there are any).  My initial goals are to determine the following:

The envelope is pretty clean and shows a nice, red City Date Stamp (CDS) that reads "Providence, R.I., Oct 12, 1858."  It was mailed from Providence to Norton, Massachusetts.  This letter needed 3 cents in postage to cover the standard letter rate inside the United States for an item that weighed no more than 1/2 ounce and traveled no more than 3,000 miles (letters to and from the West Coast required more postage).

A three cent stamp was placed on the envelope to show payment for the domestic mail service.  The stamp itself was defaced with a circular marking in black ink that reads "PAID."  We often refer to the postal marking that was used to prevent reuse of a stamp as a "cancellation device" or "obliterator."

The postage stamp is a design that was first issued in 1851, but this particular stamp is known as an 1857 issue.  Leave it to a collector to make things more complicated!

A quick look at the stamp 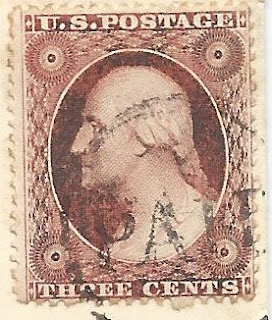 Collectors can be interesting creatures because they can find all sorts of ways to see differences where others do not.  I mentioned that this is known as an 1857 issue of the stamp and I know that because the edges of the stamp are "perforated."  Stamps were printed in sheets - and prior to 1857, these sheets of stamps were separated by a scissors or a blade of some sort.  In 1857, stamp production added perforations to allow people to separate stamps more easily without employing a tool. 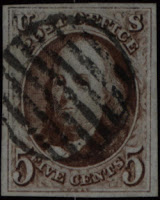 For comparison, here is a five-cent stamp from the 1847 issue in the United States.  There are no perforations along the outside edge to aid in the separation of stamps from the sheet.

From the perspective of postal history in the United States, perforations on stamps is actually a pretty amazing innovation and worthy of recognition.  As it was, postage stamps were still a relatively new item (1840 for first postage stamp in the United Kingdom).  The introduction of perforations to make the use of these stamps more convenient (1854, again in the UK) reflects growing demand and use of the postal services as postage rates rapidly declined and became accessible to more of the public.

I could go even further and tell you that this particular stamp has a small design difference that designates it as a "type II."  If you look at the vertical line at the top left of the stamp you will notice that it looks like it will continue on to the next stamp that would have been above it on the sheet.  This is a key characteristic for one of these 3 cent stamps to be identified as a type II stamp.  But, maybe that's getting too far in to the weeds for today?

It doesn't matter if we are in the weeds because - well, I went there anyway.  So, climbing back OUT of the weeds....

At this point, I can tell you that this particular envelope is typical in all respects for letter mail of the time.  The stamp and cover are nice enough, but nothing special from a collector's standpoint.    Since I started as a stamp collector, I might opt to use it as a way of showing each of the three types of the 1857 3-cent issue on a postal item.  Otherwise, I probably wouldn't consider this to be a candidate for a Postal History Sunday entry all by itself at this point.

The contents of this letter are no longer with the envelope, but we can look to the address and see if there is anything that grabs my attention.  This time I am drawn to the location - Wheaton Female Seminary in Norton, Massachusetts.  This rings a bell for me, so I thought I'd take a quick look and try to figure out why I remembered that location and school.

It turns out that Wheaton College is now a co-ed, liberal arts institution with somewhere in the neighborhood of 1700 students.  Wheaton started as a college for women, established in 1834/35 as a memorial to Elizabeth Wheaton Strong by her parents.  The college maintains a page summarizing this early history.  If you wish to learn more, that is a good place to start.

There is actually another reason why this particular address rang a bell for me.  One of the running jokes, Tammy and I have is that I know all sorts of odd little facts because...it was on a stamp. 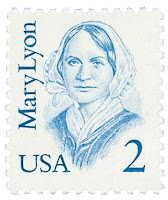 Mary Lyon was honored with a United States postage stamp in 1987.  She was an educator, a chemist, and an advocate for the provision of learning opportunities for women and is the founder of Mount Holyoke Female Seminary (est 1837).  She was an instructor at Ipswitch Seminary in 1834 and was asked to serve as the principal at Wheaton.  She declined as she was in the middle of her own Mount Holyoke project, but she recommended colleague Eunice Caldwell to serve as principal.  In addition, Lyon served as a consultant for the Wheaton school as they moved forward with the school.

What stood out most for me when I first read about Mary Lyon many years ago was that she wanted Mount Holyoke to be accessible to everyone, not just the children of those who were wealthy.

But there was a side purpose this time too!

While I like the turn this particular address took as I did a little research, what really got me started looking more closely at this cover was the fact that I wanted to pick something that looked kind of nice to go with this little coin I've had stashed in my coin bag: 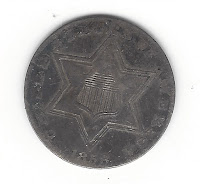 What you see here is a coin that was minted in 1858 (hence part of the reason I picked the piece of letter mail I did since it is also dated 1858).  This coin was known as a trime and represented 3 cents in currency.  The trime made its first appearance in 1851.

An Act of Congress issued on March 3, 1851 reduced the letter rate for mail in the United States to 3 cents per 1/2 ounce for items sent no more than 3000 miles (effective on July 1 of that year).  A 3 cent postage stamp was issued on July 1, 1851 to show prepayment of this rate.  In addition, this act authorized the creation of a 3 cent coin (the first of its type) to provide the public with a convenient method to pay for these stamps. (*see notes at the end of this post)

The simple idea that a coin would be created to facilitate the purchase of stamps to pay for the postage of letters is a compelling story all by itself.  This illustrates just how important mail service had become as a primary communication method for a broad section of the populace. 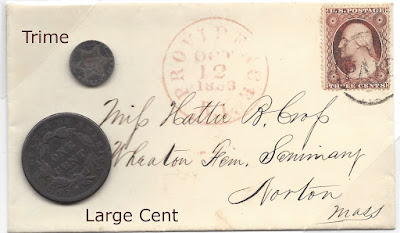 The popular name for these tiny coins were "fishscales," because they were extremely thin and very small - giving a remarkable resemblance to the scale of a largish fish.  You can see the trime at the top left of the cover shown above.  Below it would be an example of a one cent piece (known as a large cent) that was available in the 1850s.  The one-cent piece is actually bigger than a present day quarter.

Can you imagine needing three of those big coins to pay three cents versus the tiny "fishscale" that would do the same job?  Personally, I would think the trime might be troublesome because it would be so easy to lose!

For those who have interest, here is a view of the other side of the trime.  If you are a numismatist (coin collector) you might be tempted to point out to me that this is not the nicest example of a trime and you would be correct.  But, it's what I have.  It has been in my possession ever since my Dad and ten-year-old me spent hours digging through his bag of Buffalo Nickles trying to read the date on each one. 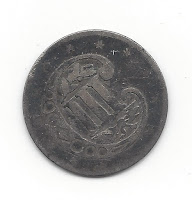 It doesn't matter what the condition is because it is loaded with personal meaning - and now it has an envelope to tie it to the primary purpose of a trime - paying for a letter to be mailed.

Thank you for joining me for another Postal History Sunday!  I hope you enjoyed the journey, whenever you decide to take it.

For those that find the combination of coins and postal history to be intriguing, I would highly recommend an exhibit put together by Richard Frajola called Paying the Postage.  I am intrigued by the fact that foreign coins were frequently accepted as payment and policy often set values for their use in the United States.  If you are only interested in the trime, you can go straight to frame 3 of the exhibit.  Some very nice examples of the trime can be seen there.

Sometimes, to keep the flow of the blog post going, I don't give every detail.  And, sometimes, I provide extra information at the end for those who want them.  Today is such a day!

* Section 1 of Postal Act of March 3, 1851 established "That from and after the thirtieth day of June, eighteen hundred and fifty-one, in lieu of the postage rates now established by law, there shall be charged the following rates...For every single letter...for any distance between places in the United States not exceeding three thousand miles, when the postage of such letter shall have been prepaid, three cents, and five cents when the postage thereon has not been prepaid...and every letter of parcel not exceeding half an ounce in weight, shall be deemed a single letter..."

* Section 3 of Postal Act of March 3, 1851 provided direction that the Postmaster General should create "...suitable postage stamps, of the denomination of three cents...to facilitate the pre-payment of postages provided for in this act."

* Section 11 of the Postal Act of March 3, 1851 stated that "...it shall be lawful to coin, at the mint of the United States and its branches, a piece of the denomination and legal value of three cents...it shall be a legal tender in payment of debts for all sums of thirty cents and under..."

The three-cent 1851/57 stamp design has caught the attention of many collectors, past and present.  If you would like to learn more, you can visit the resources put together at the US Philatelic Classics Society site.  Like so many things in postal history and philately, you can dig as deep as you wish or you can explore as broadly as you want.  And that is part of the reason I enjoy this hobby.

Have a great day!