After a short break, we are returning to a Saturday Variety Show post where we feature a veggie variety we have grown at the Genuine Faux Farm.  This week, we're going to look at what has become our favorite beet variety to grow at the farm.  And, if you want to know what I feel about eating beets (and other things in general), you can check out the post titled Not That Simple. 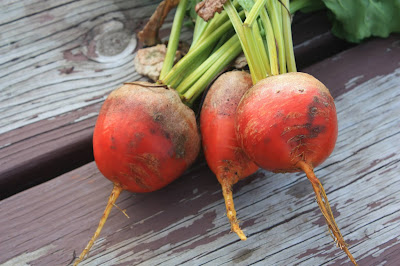 I have to admit that I was never fond of red beets - and before we started growing, I believed I did not like ALL beets.  Then we tried Chioggia (a red and white striped beet) and found that I actually kind of liked those.  That, of course, led to further experimentation and we found that I actually really like golden beets!  The problem with that was that meant we had to find a variety of golden beets that would reliably produce at our farm. 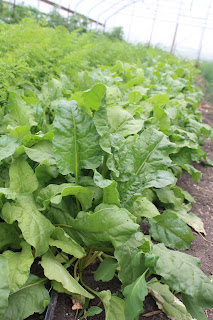 Over time, we have found that Touchstone Gold has been the most reliable beet for germination, which has been our biggest hurdle for production.  In fact, we had enough trouble with beet and carrot germination that we started using valuable high tunnel space for each of these crops so we could cover some of that need in our CSA reliably.

Beets and carrots work well in a shared bed when grown in a high tunnel.  We have put as many as three rows of each into a single bed, but we had the best results for overall production and labor conservation by sticking with two rows of each.

The photo at the right shows the broader ,yellow-green leaves of a Touchstone Gold beet.  Other, red varieties tend to have darker leaves that sometime show a hint of red or purplish veins.

Beet seeds are typically multigerm seed balls, so each 'seed' you pull out of a packet may actually result in several different plants (typically no more than four).  If you don't overcrowd your seed planting, these plants can usually co-exist just fine without thinning.  It becomes a problem when you seed your plantings at too high of a density.

This Cornell growing guide is probably as good as any resource if you are thinking about growing some of your own beets.  There is also a nice blog presented by High Mowing that talks about soil and beet production.

Just remember that growing for yourself and growing in larger amounts for commercial purposes are two different animals.  From our perspective - once we manage to get beets to germinate - the biggest issue is keeping the weeds out of the crop.  The other part is remembering to keep beet production out of areas that are in the rotation for adding fertility.  Too much nitrogen, in particular, can result in gorgeous leaves, but no root.  Great if you want to harvest the leaves and sell them, not so good if you want the roots. 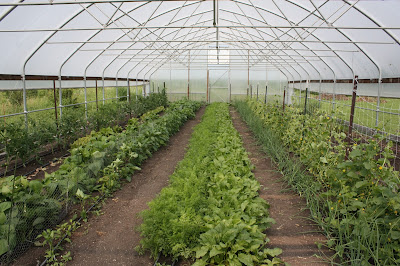 We have successfully grown beets both inside and outside of the high tunnel, but we find they do best in areas that have loose, sandier types of soil rather than some of the areas that have heavier soil with more clay content.

We do not normally harvest the leaves, but we do leave them with the root in the earlier harvests so the customer can decide for themselves if they want to use one, the other, or both.  We note that the leaves of Touchstone Gold do stay a bit more tender than other varieties even as they get larger.  You might want to trim off the stem and a some of the base if that is the case.

Touchstone Gold roots can be harvested young or can be allowed to get quite large.  There are always a few beets we leave in the ground for most of the season, we find the centers of these are still solid with a fine texture.  We usually will not harvest beets until they are at least the size of a half-dollar and don't hesitate to cut up and happily roast a beet that goes well beyond the one pound mark in weight.  Ideally, we like our beets to weigh about a third of a pound.  The picture at the top of this blog shows approximately one pound in beet root.

A word of warning about letting them sit in the field for longer periods - they aren't going to necessarily remain a nice roundish ball that you want to take pictures of.  They'll start to get some crags and lumps that make them a little harder to work with.  They still taste good, but they won't market well once you let them run long.

One of the benefits we have had with high tunnel production is an extended season without planting a new succession.  With a multigerm cluster of beets, it is not uncommon for one of the cluster to get large enough to harvest while the others remain small.  If you harvest the larger beet and give the smaller ones more time, you can effectively extend the harvest.  This comes, of course, at the cost of continuing to keep the bed weeded.  But, that's why the high tunnel is a good place for us to do this.  We control the water, which helps us to control the weeds, buying us the time to play this particular game with this particular crop. We prefer to clean out the beets in an outdoor row over a shorter harvest period.

A typical high tunnel planting (shown above) in a shared bed of carrots typically yielded us 150 pounds of quality beets.  These plantings are normally 2 direct seeded rows about 60 feet long in a bed shared with carrots.

Touchstone Gold has actually made our annual Veg Variety Winners list, landing at #9 in 2015.

I hope you enjoyed this veggie variety feature for this Saturday.  Have a great weekend!