or to add to the farm's troubles, by pecking end them.

The eyes of a hen are placed on the sides of their heads, though we have noticed some are a bit more forward in placement than others - even in the same breed.  It is said that a hen has approximately a 300 degree field of vision.  But, if she wants to a get a good look at you, she will turn her head to the side so she can get you in full focus with one of her eyes.

and by leap we oft end in heartache, suffering the natural shocks that poor flight is heir to.

'Tis a frustration as flight is devoutly to be wished. 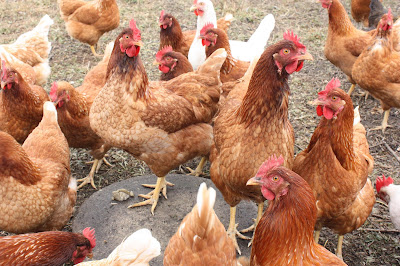 If you have seen Chicken Run, you may have the mistaken assumption that all laying hens are unable to fly because they lack "thrust."  This is largely true for "heavier" breeds of chickens.  But, lighter breeds are perfectly able to fly.  In fact, we have found that the California Whites and the Americaunas on our farm are much more capable of attaining the appropriate thrust for some flight.  There is a reason we have six foot tall fences around our main hen pasture.

However, just because you can fly, it doesn't mean you are particularly good at it.  Don't expect any aerial acrobatics out of a hen.  Sometimes, our hens will misjudge their attempt at flight and run into walls, doors, humans... other hens...

Let's just say that innovators of airplanes and helicopters did not use a chicken as a model for figuring out ways to fly.

To sleep - perchance to dream: ay, there's a bug!

After we have shuffled to our perches, and gripped them with our talons. 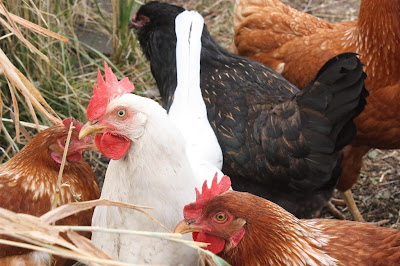 Chickens actually do have an REM (Rapid Eye Movement) sleep cycle that indicates the capacity to dream - possibly catching some tasty six-legged things in their sleep or soaring over the treetops, since they typically can't do that in reality.  While sleeping, we have noted that some birds will 'snore' in various fashions.  Some will emit a long whistle, not unlike some of the exaggerated sleep sounds found in cartoons.

And, as far as perches are concerned, there has actually been research on what the best perches for a chicken might be.  At the Genuine Faux Farm, we tend to favor 2 x 2 square boards that are slightly rounded.  Some birds prefer other surfaces in the hen room and a few prefer staying on the ground.  In fact, if you look closely, they may not be gripping the perch as much as you think once they settle in!

There's the respect that makes calamity of a rooster's life.

For who would bear the snips and scorns of hens,

The crows are long, the proud rooster's song rings about the farm.

Ignoring dawn's delay, wearing the insolence of his office. 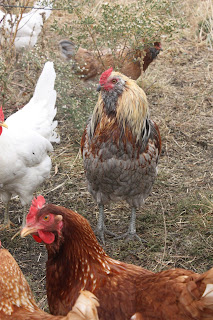 Stu is the name of our current rooster on the farm (he wants you to spell it right - after all, "Stew" would not do).  He is an Americauna rooster and he displays a fine ruff of feathers around his neck and a pretty decent set of tail feathers. Of particular note is Stu's amazing, extendable neck.  While most chickens can extend their neck out, Stu can go from the resting position you see above to holding his head up a good six to eight inches higher when he straightens up.

One of the things we have noticed over time (and several roosters) is that roosters can have a wide range of temperaments.  Some can become overly aggressive towards both the hens and humans.  Others can be bullied by the hens (a recent rooster never had a chance to grow out a full tail because the hens kept pulling out the feathers).  Some crow a lot and others not so much.

The biggest reason we keep one or two roosters with our flock is the reliable "alarm" call that you can learn to respond to.  No - I don't mean an "alarm clock."  I mean a call of alarm.  Once you learn the language of the rooster(s) in your flock, you can learn the difference between regular flock noise and a call that indicates there is a problem that requires a farmer's intervention.

To cluck and scratch under the blue sky, but that the dread of something swoops down,

for we live in the country, where a traveling hawk passes by and returns,

the rooster's call makes us scatter from the ills that may befall us - perhaps to fly to others that we know not of?

thus being chicken makes cowards of us all... 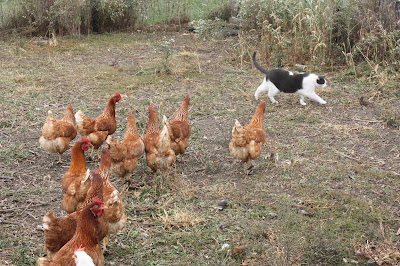 It is true that hawks, owls and other flying predators can be a problem for a laying flock.  But, if you watch closely, the rooster and some of the hens will often turn an eye to the sky to watch for problems.  In fact, in our flocks, we typically have one rooster and seventy or more hens.  With that sort of situation, it is not uncommon for a couple of hens to take on more aggressive, protective roles to supplement the rooster's role.

It is also interesting to note that a flock can learn which sort of predators they need to fear (such as the hawk over head) and those they might be able to intimidate (such as Inspector).  If you look closely, you can see that the hens who are warning Inspector away have extended their necks.  The hen at the right is a flock caretaker in our current flock and will usually lead a charge towards our poor cat - who just wanted to come say "hi" to the farmer who was taking pictures of hens.

While you might think hens are really pretty smart (and they are in their own ways), please consider that there are reasons for some of the stereotypes.  We have seen chickens in the pasture get surprised by something as innocuous as a leaf falling.  One hen gets startled and that leads to a whole flock running for cover!