We can't help it. Tammy and I have a tendency to create or use words differently than many people when we refer to things on the farm. It's so ingrained in us that we often forget that others do not have an Genuine Faux Farm to English (or any other language) dictionary. Here's the beginning of your personal copy of that work.

And please remember, sometimes things might sound a little crude to you - but when you live on a farm, some things happen and you have to find a way to deal with them.  One of our ways is to maintain a sense of humor. 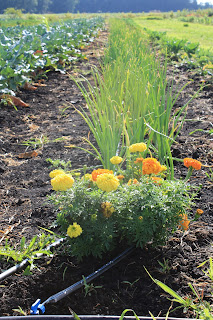 Accent - the flowers you see on the edges of our fields or in the middle of our cash crops.  We like to call them an 'accent.'

Ali and Frazier -  as our male broiler chickens mature, they start to challenge each other.  They stand about a foot apart in an aggressive posture...giving each other the 'evil' eye.  Occasionally, they'll move their heads up and down trying to get an advantage.  Rarely, they'll give each other chest bump.  Once all that is done, they go eat something.

Beaks of Doom - Every once in a while there is a disturbance where many chickens or turkeys move quickly at once.  Flying insects do cause quite a stir in the flock.  Until they meet a beak of doom.

Bills of Doom - it turns out that the ducks are pretty good at catching things as well.  They're just funnier when they try to move quickly.

Broiler hiccups -  Ok - they are not really hiccups.  But, the sound some of these birds are making as they attempt to learn to crow....  hiccups is about the only valid description we can come up with.

Broom Bird - We used to have to work harder to put broilers into their buildings, so we used to play a game called broom bird.  No - we did not *hit* the birds with brooms.  But, we did use brooms to direct birds to their shelter.  Our waving arms didn't suffice - but a colorful broom - that's the ticket. 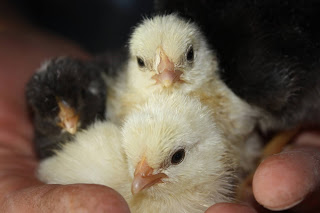 Chalkdoor - the chalkdoor is exactly what it sounds like.  It is a door that has had blackboard paint applied to it.  Sometimes the chalkdoor speaks to us. 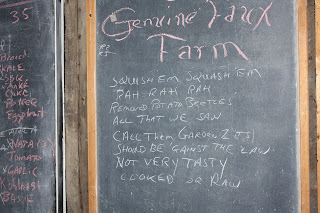 Chuckie - any woodchuck on our property has a tendency to be at least mildly evil. The mama woodchuck is, of course, Bride of Chuckie and the young-uns could be considered Spawn of Chuckie (see also: Ewok)

Clyde - sometimes a bird will not go into shelter at night.  If an owl finds them, we usually just find internal organs the next morning.  That bird is automatically named "Clyde."  See also "Not Like Clyde."

Door Warden - one to three of our turkeys tend to stand (or sit) in the door area of their shelter as a guard until we come to close the door for the night.  These are the self-appointed (or perhaps flock-appointed) "door wardens."

Dumb Truck - we learned this one and adapted it from an advertisement in a free farm magazine that lists such things for sale.  There is evidently a unique Dumb Truck (only 1) for sale.  Funny that it looks like what most people would call a Dump Truck.  From that point on, we call anything that looks like the truck in the ad a "Dumb Truck."

Executive Decision -  there are numerous times during the growing season that a decision simply gets made for us.  That's just the way it is.

Farmer Delusional Syndrome -  Any farmer who creates a vision for their farm while sitting inside on a cold January day can relate to FDS.  If you want more detail - go here. 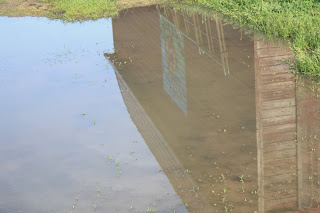 Field Access Indicators - the puddles in the drive area.  If they are full, you likely can't work the soil in the fields.  If they are damp, pretty close to ready.  Dry?  Go for it.

Flutterby - that's a butterfly... when it flies by.

Freezer Camp - after a trip to "the Park," our poultry often take a trip to Freezer Camp so they can chill for a while.  Eventually, they are hosted as dinner guests at (or probably "on") various tables in the community....

Henlet - a young hen.  No longer a chicklet, but not an adult.  They have their own soliloquy.

High Speed Internet - Oh, wait.  That one belongs in our myth list on the farm.  Put it between "weed-free" and "on-schedule".

High Wind Warning - Look out!  Wasn't that the neighbor's tractor/silo/cow blowing by?

Insta-Tan - put on suntan lotion, go oustide on a windy day when the soil is dry and sweat a little bit.  The result is often an insta-tan that will be the envy of all of the other kids at the pool.  Sadly, the pool owner will not feel envy if you jump into the pool with your insta-tan.

Kamikaze - a blackfly or gnat that does that little loop in front of your eye before diving right in.  Also known as a #$*%!

Kite - it's a pull-behind tool for a garden tractor that flips up grass clippings into the carrier so it can be used as mulch or compost. It can catch the wind too, there you have it.

Knucklehead - a generic term used for any of our poultry that is causing Rob's blood pressure to go up. Occasionally, deer, chuckies, raccoon, cats and other critters will become a knucklehead. Early in life, Rob called bullheads 'knuckleheads,' but that's another story. 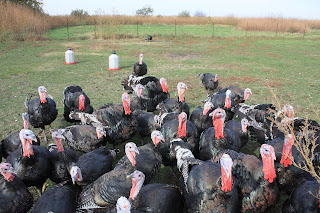 Knucklehead (definition 2) - the final stage of development of the turkeys at the farm.  They follow the progression Turklet, Turkle, Turk.... Knucklehead.

Mentor crop - often we plant successions of a crop (to spread out the harvest).  The planting that was put in earlier is often our 'mentor crop' if it is doing well.  When the new succession pokes their little heads up out of the ground, we point to the earlier crop and say, "See - that's what YOU'RE supposed to do."

Misplaced - things that were not properly anchored or put away prior to a strong wind. 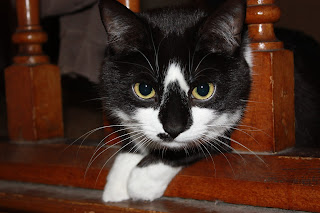 Nibster - Both of the little feline type creatures that live in our house are nibsters.  Nibster is what you get if you shift your right hand to the left one spot (as a touch typist).  See if you can figure it out.

Not Like Clyde - We now tell our broilers to 'not be like Clyde' when they don't want to go into their shelter at night.  Still, that bird had guts.

On Schedule - how about now?  Now's good.  Unless later would be better.

Orbin - that's a robin for people who aren't always so good at word scrambles.

Paid in Full - what a critter is said to have done if it does not escape from the Fauxes after it takes out some of their poultry or crops.

(the) Park -  the Park is where we take our meat poultry when the time has come for them to... ahem... prepare to be dinner guests.  Many of them will then go to Freezer Camp to chill for a while.

Product Tester - that would be Tammy. She likes to eat produce in the field.

Reeechard -  the Dickcissels on the farm are very insistent in their Summer call.  We prefer to refer to them with their 'given' name instead of the shortened version.  What?  Didn't you know they are Reeechardcissels? 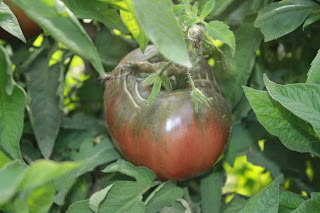 Scout - the early tomatoes that often precede the main crop by 2-4 weeks.  Most tomato varieties in our fields will set a couple of tomatoes early and ripen then well before the main crop.  We figure they are checking out our farm before encouraging the rest to grow and ripen.

Skritch - our cats like to get a good skritch now and then.  You do not scratch a cat, they scratch you - especially if you don't skritch them properly (and often enough).

Skritcher - any tool used to scratch up the ground and make life more difficult for weeds. Officially, a skritcher has tines - but we stretch the definition for saddle hoes, wire weeders, etc.

Squish - ya, that's a squash. There is a summer squish, pumpkin squish, butternut squish and rotten squish that goes 'squish' when it's squashed.

Sun puddle - especially prevalent on sunny Winter days.  Cats are particularly good at commandeering the flat spaces where a sun puddle resides.  Beware - they (the sun puddles) tend to move.

T.E.F. (Thistle Eradication Forces) - when you have to deal with Canadian Thistle on your farm, it's time to gather the troops.

Time Wasters - aka kittens.
Time Square Ball -  I was thinking about renting the Time Square Ball that drops for New Year's.  Set it to start at the top and slowly sink to the ground as the day for taking the broilers "to the park" approached.  But, then I wondered if people might think I take too much glee in that thought.  The reality is - we just don't have a good place to set the thing up.  If we did get it, would it be a Fowl Ball?  At least you know you'd get the Chicken Dance out of it.
Turklets - baby turkeys
Turkles - the next stage for turkeys after "turklets"
Turks - the third stage for turkeys after "turkles."  The following stage is "Knucklehead".

UnEgg Space - when you tend to pick 4 to 5 dozen eggs a day from your laying flock, *any* space in the refrigerator that does not hold eggs is UnEgg Space.

Waldo - can you find the Oriole in the Oak trees?  You can't?  Well, that's why we call him Waldo.

Weed free - This is also a myth along the lines of "High-speed internet."  In both cases, there is some debate regarding how much value we should place on each.

Windy - That's when you close building doors so things don't blow OUT of the buildings.

Email ThisBlogThis!Share to TwitterShare to FacebookShare to Pinterest
Labels: Excuse me sir - you appear to be listing, general strangeness and minions, Throwback