A common theme in the life of the Genuine Faux Farmers - both Rob and Tammy - is that we are ambitious, we expect a great deal out of ourselves, and our "to do" lists are typically far longer than we have time to accomplish everything in.... 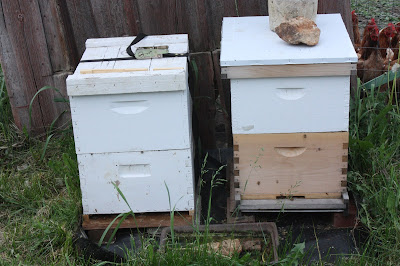 Little things.  Things that, by themselves, really shouldn't take too much time or effort, just don't get done and then they become larger things in our heads.  Things like putting the reducer in the beehive at the left.

For those who don't see it or understand - look at the openings at the bottom of each hive.  The one on the left goes the whole width of the hive.  The one on the right has been reduced to a few inches in width.  The concept is to give the bees a smaller area to defend against critters that might want to invade.

If you still don't see what I'm talking about, just seize onto the explanation that a smaller opening is easier to defend and leave it at that.

The reducer is just a small piece of wood that gets pushed into the larger opening.  The trick is, you don't really want to do it when the hive is active.  This is an early morning or late evening task.  But, our mornings are usually filled with numerous chores.  Our evenings also have chores... and much less energy.

And, to be perfectly honest, we tried to put one in last night and found that they were cut just a little long.  So, the task got a bit more complicated... and we were tired.  So, we left it for tomorrow.

Or the next day. 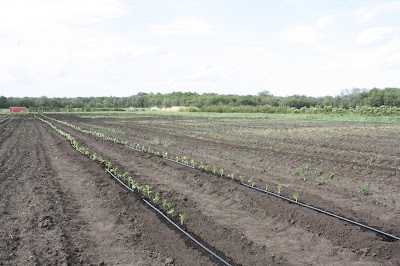 Temperatures have been predicted to be unseasonably low Friday night with possible patchy frost.  Now we feel less happy about having gotten all of these cucumbers planted.  Will we be able to cover these plants to protect them?  It really depends on when the winds calm.  If they calm too late, I suspect we'll just hope we get lucky.

Because our limits get reached a bit sooner than they might have other months of May. 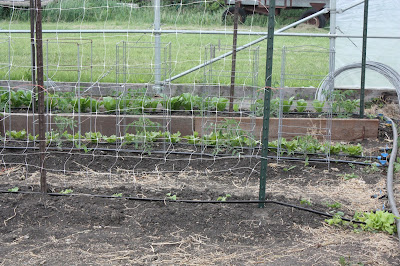 Tammy had to carry a heavy burden for many days, taking care of all of the chores and all of the animals.  Trying to do what she had to do for Wartburg.  And, being a "Guardian Dragon" for her partner (that would be me).  There was understandable worry, fear, and frustration and it took its toll.  It only makes sense that she might still be trying to recover lost sleep and find some mental and physical balance that was lost.

I, of course, am still healing.  That means that I get tired more quickly than I think is right for the amount of effort I put into things.  I sat down this evening with the idea that I could knock off a couple of "smallish" tasks that required some concentration.  I was motivated to do them.  But, my brain refused to concentrate on them.  So - I decided to finish this blog post and hope that it makes sense tomorrow (Friday) when people read it.

Let me explain just a little more.  This tired is a special kind of tired that people who have had similar surgeries might understand.  The brain just kind of ... refuses... to do more.  In a little bit, it will just flip a switch and I'll be asleep.  That's pretty odd for me, as I am typically a light sleeper and it usually takes a while to wind down so I can sleep.

I pushed fairly hard to do some physical farm things when the weather was nicer.  But, Thursday's rain allowed me to do indoor work and my body was telling me that I had pushed it a little.

First, let me assure you - this was nothing serious.  I stayed well within safe limits, but I did push myself within those well-established limits.  This was just my body saying that, "Hey.  You did actually expend some energy and move around and use some muscles (in a good way) and thank you for doing that.  Since I am also trying to heal you up, could you slow down a little and let me do that work now?  Then you can be up and moving again tomorrow."

It's all good.  But, I guess I'll just have to move a few items from today's "Very Ambitious Plan" (VAP) to tomorrow's VAP.

Have a nice day and upcoming weekend everyone!  Now, I will follow the advice of the Sandman... and go take a night-long nap!

Email ThisBlogThis!Share to TwitterShare to FacebookShare to Pinterest
Labels: just kidneying you