People who have read the blog, gotten our farm emails, or have conversed with us may recognize that Eden and Valhalla are the names we have given each of our high tunnels at the farm.  I recognize that I don't always clarify what I am referring to anymore when I say "Eden" or "Valhalla" so I apologize if I left you sitting there feeling confused once or twice in the past.  I can't say it won't happen again...  But, I'll try to remember that not everyone lives in my world.

I recently received a great question regarding high tunnels that came in response to the recent move (two days ago) of Valhalla from its East position to its West position: "So the point of the high tunnel is to get crops started earlier than without one? And you move it to another section to repeat that process?"

The question was a great reminder to me that the whole reason for a high tunnel is not entirely transparent to the rest of the world.  In fact, I sometimes wonder if many who put up a high tunnel have a good reason as well! 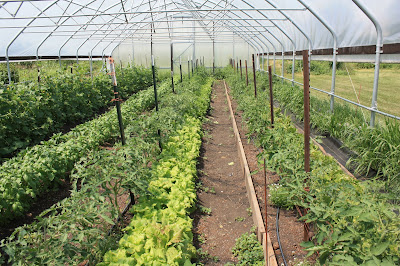 We put Eden up in 2010 (if you want to see some of the pictures you can go here and here).  After a little experience, the results were actually pretty encouraging.  In fact, this is where we learned that our snack tomatoes did exceptionally well under cover in Eden.  Our production in this building has consistently been good, with only a few exceptions.  Eden has been a 'happy place' on our farm for over a decade.

Valhalla was added to the farm in 2015.  The first year of production in that building was a bit rougher because of the conditions of the soil when we built it.  When you drive and pack down soil when it's wet, you can have difficulty working it and growing things later in the year.

Both buildings are two position, mobile, high tunnels.  The normal plan is to move each building once a year so we grow in each position for 12 months and we provide the ground opportunity to recover and avail itself of nature's filters when the building is off of a section.

Eden is the "smaller building" at 30' by 72' in size.  Valhalla is a 96 foot long building, with the other dimensions being similar.  Since we had a few years of experience with Eden before we built Valhalla, we were able to address a few issues by adding ditches on each side and raising the soil surface inside the building with respect to the surrounding area.  There is also access to water in each position of Valhalla - not something we enjoy with Eden.  We have to pull hoses out to Eden when we want to irrigate. 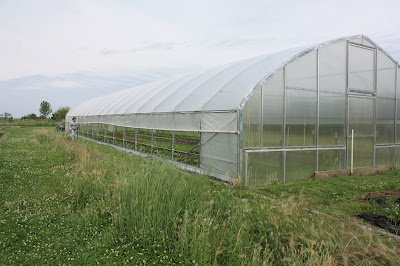 Back to the Question

So, what exactly is the point for our farm to be using two mobile high tunnels as a part of our growing system?

This is the most commonly cited reason for high tunnel growing.  The protection afforded to crops has allowed us have spinach in March and lettuce in December.  We have had green beans and tomatoes in early November.  So - yes.  We can gain a little flexibility in what we grow effectively and have fresh produce for more months of the year.  We can also extend the harvest of some crops that bear fruits (such as peppers, tomatoes, beans).

2. Adjusting for Wet Years at GFF

One of our biggest problems at the Genuine Faux Farm since we started has been the number of heavy rains and overly wet months during our growing seasons.  A high tunnel allows us some measure of control for how wet things get.  Well - most of the time.  It's a moot point if the water table gets so high that it seeps into the building.

When the rest of the farm is wet, we can normally get work done inside the high tunnels.  If there are crops that really do poorly in wetter conditions, they tend to thrive in the high tunnels.  If you grow heirloom tomatoes you can make sure to harvest ripening fruit prior to irrigating.  That's not always a choice in the field - when it rains, it rains.

The increased use of dicamba has resulted in more cases of that chemical vaporizing and drifting after application.  Since 2016, when dicamba was approved for use in soybeans, we have watched some of our crops (such as peppers) suffer in the field, while their counterparts in the high tunnel perform as they have in the past.  It's almost enough to make me wish we could put up an invisible shield around our farm.

But, since that is not an option, we move some of the more sensitive production into Eden and Valhalla.  We can't move everything in there, of course, so we have to make careful choices.  It's part of the reason why our high tunnel space could be considered the 'high rent district' on our farm.

Typically, once we figure out a crop in the high tunnels, production numbers per square foot are much higher than they would be outdoors.  For example, it was common to get maybe 50 Jaune Flamme snack tomatoes per plant in a season when they were grown in the field.  In the high tunnel, it is common to get triple that number.  We have similar results for green beans (3 pounds per row foot vs 1 pound).

In some cases, such as carrots, we often struggle with field production on our farm but find they do ok in the high tunnels.  If the option is reliable crop vs likely crop failure, the choice could be pretty simple.

If plants are sheltered from heavy rains and winds, leaves tend to be subject to less tearing and bruising, plants break less often, fruit are damaged less often, and there isn't going to be a bunch of splashed on dirt and debris after a downpour.  From the perspective of harvesting and cleaning for sales, it is just a good deal easier for us.  When labor is one of your biggest issues, this can be a pretty big deal.

6. We still grow in the ground and we still work with nature

This is where the mobile buildings come in to play.  We are able to allow the soil an opportunity to rejuvenate itself when it is exposed to the elements.  This would not be true if we had a stationary building.  So, soil health remains one of our key premises for a healthy growing system.  We also do not expend extra energy with fans and supplemental heat.  We use venting, passive heat retention, and passive solar gain to do these jobs.

I recognize that some growers might scoff and suggest we could squeeze even more out of these buildings - but I feel the rate of return would begin to diminish for us if we pushed further.  Sometimes enough is enough. 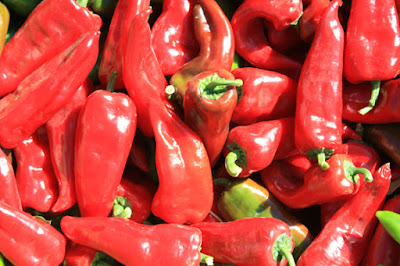 There are always drawbacks to any tool and any thing a farm might try to do.  If you don't see them, you aren't really looking or you are lying to yourself.

But, replacing the plastic is not the only thing.  If you have high tunnels, you must be aware of the weather so you can shut them down if severe weather threatens and open them up again if the sun comes back out (or you'll bake your plants to death!).  Every time it hails or the wind howls, you wonder a little what you'll find when you go look at the buildings later.  The string on the roll up sides need replacing every so often and various things do wear out and need replacing over time.

They're tools/buildings.  They require attention.  That attention costs you time and money.  And, of course, they cost you money to put them up in the first place.  Which means you may also spend money on insurance in case they are destroyed in a storm.

And that's not the only thing.  I often wonder about the long-term costs for the health of our soil and the environment that surrounds it when I cover it with plastic.  We try to mitigate some of those costs by using the movable buildings.  We mitigate it further by not allowing ourselves to cover our entire farm in high tunnels.  But, I am fairly certain that plastic covered buildings are not as friendly to the environment as other options might be.

Let me put it this way.  I refuse to fool myself into thinking that my farm is always in line with what is best with nature.  If I keep questioning, maybe I can eventually get as close to in line with nature as is possible.  That's my story and I'm sticking to it.

And the final issue that comes to mind?  Once you invest in a high tunnel, your exit strategy for growing becomes a whole lot more complicated!  I've seen many similar structures as they simply become more ragged from neglect over a period of years.  It isn't so simple just to take them down and let the land return to what it was.  And it gets harder to convince yourself to cease growing entirely once those buildings are in place.

And there you go.  A long answer to a short question.  I hope it was of interest and maybe you learned something new?  Have a great remainder of the week!

Email ThisBlogThis!Share to TwitterShare to FacebookShare to Pinterest
Labels: Eden, Excuse me sir - you appear to be listing, Valhalla