Just last Wednesday, we shared on our blog all of the "Farm Progress" that we had made with the help of many others.  And now we remind everyone of the perilous line we often walk as we do our best to make the right decisions about how - and when - we do certain farming tasks. 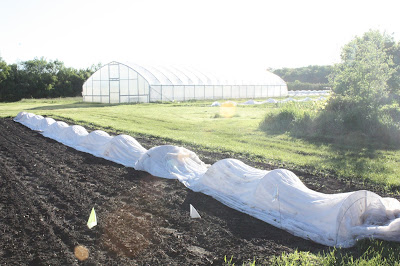 Generally speaking we were past our "last frost date" for our area, which typically gives us the "green light" for planting more sensitive crops into the ground.  If you take the link in the prior sentence, it will show you the typical last and first frost dates where the odds of a frost at that point reach a 10% chance mark.  The closest location to our farm is New Hampton, which shows April 29 as still having a 50% chance of a frost in that period and May 9th reaches the 10% mark.

Our history at the farm tells us we do not match up with that and we normally accept May 20 as being pretty safe.  For comparison, Waterloo hits the 10% mark on May 12, Mason City on May 14 and Decorah at May 23.  From those dates, the frost chance continues to go down - of course - until we reach September.

This explains why we had frost at the Genuine Faux Farm on May 29th. 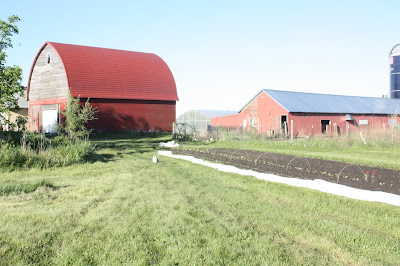 The set up was actually classic.  Full moon within days of the event.  A rainy and windy system where the temperatures have trouble getting out of the 40s all day, but stay in the 40s at night because of the cloud cover.  Then, the clearing starts in the evening, just an hour or so before sunset and wind doesn't die down until then too....  Once the skies clear, the temperatures plummet and the frost forms in the wee hours of the morning.  We see this pattern nearly every Fall - but we are most unfamiliar with it in the Spring (thank goodness!). 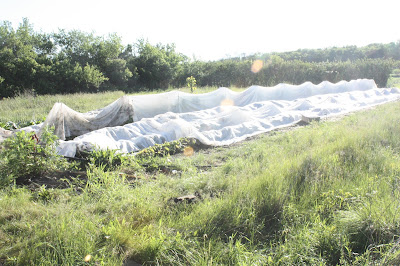 The issue for us this year?  Well, we were actually doing pretty well with getting things in the ground this Spring.  We moved Valhalla, which exposed green beans, snow peas, potatoes and other crops to the elements.  We put in about 1100 row feet of cucumbers and melons.  And, we slapped in shorter rows of winter squash, pumpkins and summer squash.

In short - not a good thing. 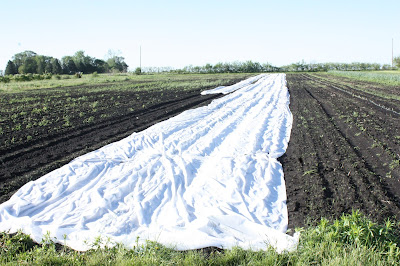 So we did what neither of us really wanted to do, get the row covers out and do our best to protect all of the sensitive crops.  We had just received about 1.3 inches of rain, so things were muddy - and there was still a bit of a breeze.  In short, this was not a picnic. If you've every walked in mud before, you know how you "get taller" as more and more mud adheres to your footwear.  You also know how much harder it gets to move with every step.

And, we're doing all of this when we're actually ready to wind down for the day - this has been especially true for Rob since the surgery.  But, we had to wind-up so we could get this done. 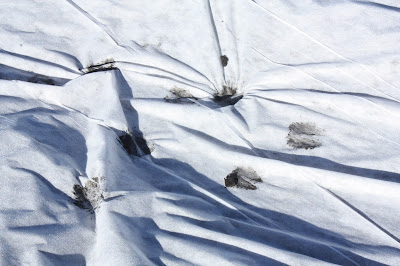 The next day, I went out with the camera to document things as I started to uncover.  The temps were hitting the upper 40s by this time, so most of the frost had melted.  Although, there was still some on the clover in a shaded area (see below).

The row covers were extremely wet and my pants got soaked after removing just one section of row cover.  After some of that work, I decided it might be better to leave things out to dry a bit more (that didn't work - more later).  I also noted, with some amount of disgust, that the local deer thought our row covers were fascinating.  They walked all over the covers we put over the cucumbers in the Eastfarthing (our East fields).

Looks like we're going to have to do more with deer control this year. 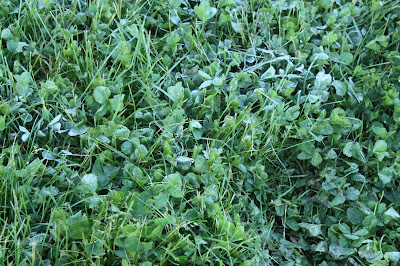 Thus far, it looks like most of the crops we covered will be fine.  There was some evidence of burning on some of the beans where there were holes in the cover.  We consider this proof that we would have had NO crop if we hadn't got the covers out.  There were some minor issues in the peas as well.

The cucurbit rows where we had hoops fared better than those that did not.  There were sections of the cucumbers that we're not sure if they will grow through their issues.  And, there were cucumbers that were crushed by deer walking on them (and the cover).  There were some plants, such as sunflowers and zinnias, that we had seeded and did not cover.  They were not looking as happy as we would like, but I think most will recover.

We'll wait and see.  If they don't - we'll till them in and try again I guess. 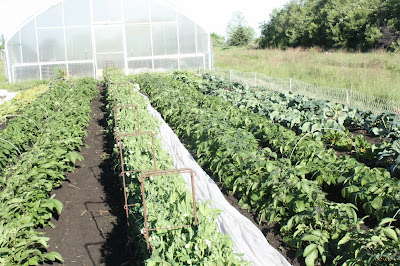 In the end, we uncovered our crops and took the row covers to grassy areas to finish drying before we could roll them up.  I think that was mid-afternoon before we could really consider doing that.

So, that's the fine line we often walk with our farming.  We know that some of the wettest weeks of the year at our farm typically run from the 3rd week of May until the 3rd week of June.  At least that has been the case since about 2008.  This makes our planting windows extremely tricky.

We have to find soil conditions dry enough to prep and plant.  But, we have to gauge the likelihood that we might be putting certain crops in too early and risk a frost.  We made a judgement call that we needed to put as much in the ground as we could before this last rain.  After all, it will probably be several more days before it will be dry enough to plant again.... which means we are suddenly in June and time grows short.

Maybe it will work out.  Maybe it won't.  But, I still think it was the right call for the circumstances of the year.  I can live with that.

Here's to some fresh snow peas in the coming week - I'll take that as a reward!