Welcome again to our Saturday Variety Show post where we feature a veggie variety we have grown at the Genuine Faux Farm.

This week we will dispense with some of the introduction and do some housekeeping.  For those who are unaware, I will have undergone surgery on April 28 to remove one of my kidneys where a cancerous mass was found.  It was important to me that I continue to offer some material in the weeks that immediately follow that event, so I took the time to select some topics that were easier to write (for me) and got them written prior to the surgery so I could cue them up for automatic release.  Assuming all went well during that surgery, I expect to return to my regular writing after I recover.

Until then, be well and I hope you enjoy what I offer here.

This week we're going to take a look at one the heirloom/heritage tomato varieties that has been in our grow list for many years - Gold Medal! 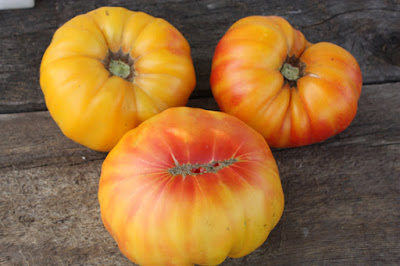 This variety is, according to my records, among a fairly short list of heritage/heirloom tomatoes that have not missed a year of production since our first "official" year as the Genuine Faux Farm in 2005.  It has never been a key for our tomato production, but it still shows up every single season - why is that?

It turns out that Gold Medal is one of the sweetest tasting tomatoes that we've grown.  These larger, beefsteak-style tomatoes are a perfect combination of juicy and meaty and they are a real treat on sandwiches (my opinion).  We like their taste so much that we have made sure to grow a few plants every year, even if we are the only ones who get to taste their goodness.

The highest fruit production per plant was 11 in 2006 - but that was a ridiculous year for tomatoes that probably caused us to over-estimate what we could do per plant for all of our tomatoes every year since that time.  A much more modest three to four decent fruit per plant is a reasonable goal for most years.  Remember, when I give my numbers, I referencing "marketable fruit."  A home gardener might count more simply because they are willing to count tomatoes that are cracked and show other damage.

Plants tend to be larger in size, which makes sense because the fruit are three-quarters pound and larger.  When I say larger, I mean.... larger.  We once brought a Gold Medal tomato to market and someone compared the tomato to the size of their newborn baby's head.  The tomato might have been bigger, weighing in at 3 pounds.

From a production perspective, if you're a commercial grower, Gold Medal can only be considered a novelty tomato that you can add to the mix.  The size is highly variable, production can be variable and the plants don't like getting too wet or too dry.  Fruit are typically too large for many to want to purchase at a farmers' market unless they are looking for "freaks and oddities."

Even so, we grow them.  They often add a nice balance in a mix with other heirlooms when we make our tomato sauce for freezing each Fall.  Those who have purchased tomatoes for their own canning or freezing usually get at least one of these big tomatoes so they can appreciate the mix as well.

Another thing I appreciate about Gold Medal is the nice, stocky plants they become very early in their lifespan.  If you could pick a plant that just LOOKS good, it would be a Gold Medal, in my opinion.

You know a Gold Medal is ready when the blossom end shows that star of red color bleeding into the yellow.  You can harvest these a bit earlier and let them finish ripening off of the vine with very little taste issues.  In fact, I recommend that so you can avoid splitting and all of the things that seem to happen right at the tail end of the ripening stages in the field.

Have a great weekend and I hope you enjoyed this week's Veggie Variety on a Saturday!