Take those worries and soak them for a bit under the faucet.  Once they're good and wet, throw them into the freezer for a while until they are solid.  Then, drop them from a sufficient height or throw them hard against a block wall so they shatter and are no longer recognizable!  Why?  Well, won't you enjoy Postal History Sunday more if you aren't concentrating on those worries?

Sounds good to me!

This week I wanted to just have a little fun and show you some of the ways a postal history item appeals to me.  There is often some sort of hook that actually compels me to add it to my collection and that 'hook' is not always as easy to recognize as you might think.  In fact, sometimes the initial attraction for an item ends up being secondary when all is said and done.

I know I've shared this before in some sort of blog post, I just don't remember where or when.  After all, it does have a farming connection, which made it fair game earlier on for our farm blog. 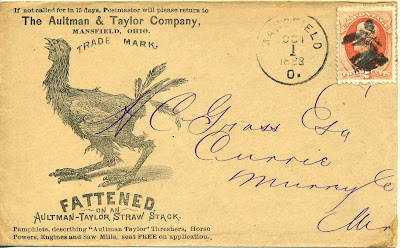 The design on the envelope is terribly hard to ignore in this case because - well - that is ONE UGLY ROOSTER!  Nothing else was required at that point to entice me to add it to my postal history and farming collection.  The post mark is clear enough and the condition is fine.  So, yeah.  Good deal.

The odd thing about it was - there was more than one of these available (ugly chicken covers), so I had to select one.

There was actually another hook for this item that is not obvious unless you know a little United States domestic mail rate history.  You might recall that I gave an overview for the postage rates in the United States in this Postal History Sunday a couple of weeks ago.  In that post, I presented this table:

This is the first day that the new 2 cents per half ounce rate was in effect.  How cool is that?  (Ok, it's really cool for a postal historian - maybe you're less excited about it.)  What is equally impressive is that this item was mailed with the correct 2 cents in postage.  Not everyone is prepared to send their mail at a new rate, but the Aultman and Taylor company was!  Of course, the postage rate went down, so there was a bit more incentive to get it right.

I wonder if they held on to some mail until October 1st so they could mail it all at the cheaper rate?

Oh - and there is a reason Aultman and Taylor used the ugly chicken as their trademark.  Their claim was that their threshers would result in fewer seed heads for grain crops being lost to the hay stack.  This poor fellow had been foraging and Aultman & Taylor created straw stack and not found much to nourish him.  Of course, if a competitor's thresher had been used, our fine rooster would look far healthier, but the farmer might not be as pleased with their yields.

Alas for the rooster!

In other words, it seems to be a pretty standard letter for the time period.  What attracted me to it? 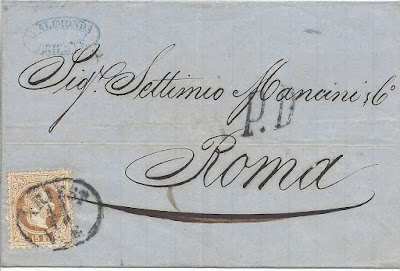 The postmark dates have something to do with this one as well.  The letter was mailed on October 11, 1870 and it arrived in Rome on October 13.

What you need to know is that Rome, and the surrounding territory known as the Patrimony of St Peter (or Latium), had continued to resist joining the Kingdom of Italy that had formed under the leadership of Sardinia beginning in 1859.  The map below can give you a picture of the territory that was still held by the Papacy after 1860 (territory in pink). 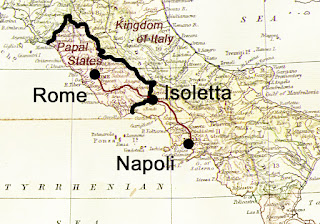 However, as we progress through the 1860s, there were increased concessions toward normalcy between the Papal territory and the Kingdom.  For example, the Papal State adopted the Italian Lira for currency.  However, the Pope still held his conviction that the Kingdom was a heretical usurpation of power from the Church.

One of the few things keeping the Italians from taking control of Latium and Rome was the presence of French troops.  The French, having troubles of their own as they fought a losing battle against Prussia, withdrew their garrison from Rome in 1870.  The Kingdom of Italy moved in September to finally annex Rome and the surrounding territory in Latium (the Patrimony).  Despite a cautious advance by the Italians, Pope Pius IX refused to surrender and offered a weak defense at Rome on September 20 and there was some bloodshed.

After a plebiscite vote on October 2 confirmed that the citizens wanted to join Italy, this area was annexed by decree on October 9, 1870.  The Pope, at this point, was left with only the Vatican under the Church's control (and it remains so to this day).

So, technically, up until the plebiscite on October 9, a letter from Austria to Rome was not technically to the Kingdom of Italy.  This letter nicely skirts right on the edge of an historic event - which makes it interesting to me.

What's With Those Stamps?

Here is a letter mailed from France to Belgium in 1871.  The postal rate for mail between these countries was 30 centimes per 10 grams (effective from Jan 1, 1866 - Dec 31, 1875).   The letter below was mailed from Lille, France to St Gilles by Brussels, Belgium and the postage was paid by a 10 centime and a 20 centime stamp. 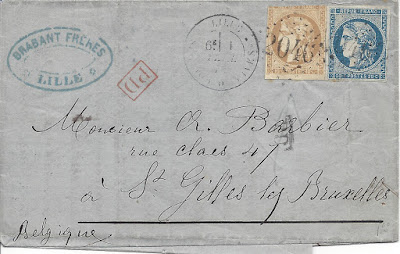 What we know about the time period that this was mailed is that the Prussians were having very little difficulty in defeating the French.  By February 1, 1871 (the date this was mailed), the Siege of Paris had ended (January 28) and France had capitulated (isn't that a GREAT word?!).  So, I suppose you could say that, once again, I have an item that comes close to some important dates in history.  Except, I really don't think Lille and Brussels have that much to do with the specific date - so that's not what made it interesting to me.

This time, it was the stamps.

Let me show you another letter mailed from France to Belgium to illustrate: 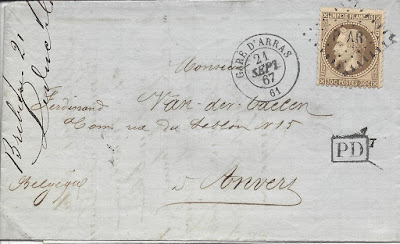 This letter was mailed in Paris in 1867 to Anvers (Antwerp), Belgium.  A single 30 centime stamp pays the same rate.  If you look closely at this stamp, you will see that it depicts Emperor Napoleon III, who had first been President (1848-52) and then declared Emperor (1853-1870).  Now take a look at the stamps on the first item: 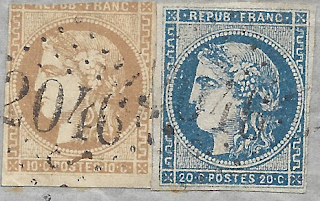 In fact, this is a depiction of Ceres, a very non-political figure intended to symbolize prosperity.  As Paris was being surrounded in September of 1870, the rest of France was cut off from the supply of postage stamps printed there.  To make the story shorter, stamps based on the first French postage stamp design were printed in Bordeaux (southwest France).  Hence this issue of stamps is often referred to as the Bordeaux Issue (we can be so clever, can't we?).  These stamps were printed using lithography rather than the finer engraved printings of the earlier issues.

Once the siege was over, the Ceres design was continued, but they were printed in Paris using engraved plates, rather than lithography.  These stamps simply illustrate an adaptation required by extenuating circumstances - something postal historians also love to explore!

One More for the Fun of It

Of course, each of these stories could be told with more detail than I have here.  For example, some have studied the Bordeaux Issue in depth and would probably scoff at my overview here as being far too simplistic.  But, that's not the point of this post - the point is that I want to show you some of the less obvious things that might interest me in any given item.

Our bonus item is much newer than most things I show on Postal History Sunday. 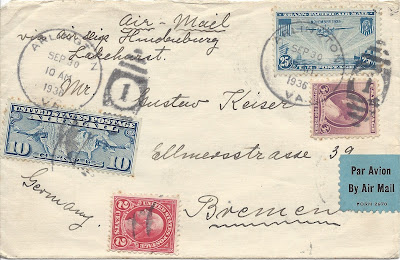 This letter was mailed from Arlington, Virginia on September 30, 1936 and it was flown on the Air Ship Hindenburg to Germany - arriving in Frankfort on October 3.  The Hindenburg made this crossing from Lakehurst, New Jersey to Frankfurt in 58 hours and 2 minutes (about 2.5 days).

At this time, the postage rate for mail carried by a zeppelin was 40 cents per 1/2 ounce in weight.  Clearly, this item must have been no more than a half ounce.

By 1936, semi-rigid airships crossing the Atlantic were less newsworthy than they had been just six years earlier.  In the early 1930s, most mail flown on these zeppelins were primarily intended to be souvenirs!  One of our prior Postal History Sundays talks about one such flight to the Arctic Circle in 1931.  But, the novelty was fading in 1936 and the price of sending mail via airship was declining.  A postal historian can find more commercial mail that utilized these flights for the relatively speedy ocean crossing.  The fastest ship crossings at that time might take five days.

Of course, most of you know the Hindenburg for the disastrous landing at Lakehurst on May 6, 1937.  There are some surviving pieces of mail from that flight, but those are reserved for persons with far more dollars than I have.  So, I am satisfied with having this item where the "hook" is that it was, in fact, carried on the Hindenburg during one of its successful flights.

And, I am good with that!

Thank you again for joining me for Postal History Sunday.  I hope you enjoyed this post and perhaps you learned something new.

I am always happy to receive feedback and corrections if I have not gotten all of my facts straight.  Sometimes, of course, I gloss over details in the interest of readability, but it is also quite possible I just didn't know something.  That's part of the joy of this whole process - even if you don't learn anything new, I always seem to!

Have a good remainder of the weekend and a fine week upcoming!