I have always liked getting "real mail" and it is possible I enjoy sending real mail just as much.  But, with the trends toward email, social media and other electronic communications, mail delivered by the US Postal Service tends to be bills or advertisements.  Even I - the person who claims to like to send real mail - fail to do very well when it comes to sending things out.  Every so often I send a batch of things out, but probably not as often as I would like.

Apparently, Tammy let people know that I would like to get some real mail from people as I recovered from surgery.  And, boy, I have been loving getting the real mail! 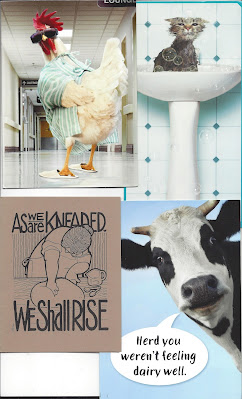 I received one package that included envelopes and postcards that had been received and saved.  The first item shown at the left was among them.  It is a simple letter sent from Norway to the United States - a nice example of modern postal history.  I enjoyed digging through the pile.  Now I need to look again since I am a little less 'foggy.'

I have also been the beneficiary of a batch of postcards that include puns.  In fact, a number of the cards have also included some puns, jokes and words of advice.

One of my favorites is shown here.

"I know a guy who got into photographing salmon in different outfits.  He said he liked shooting fish in apparel."

A close second was "I have a new favorite word - 'drool' - it rolls right off the tongue."  That's not a pun, but it sure made me chuckle.  Belly-laughs are still off-limits for a little while yet.

I have been the recipient of some homemade cards and various commercially made cards.  Thus far, I have seen a couple of designs more than once.  What does it say when a chicken wearing sunglasses and slippers speaks to people as they look for something to send me? 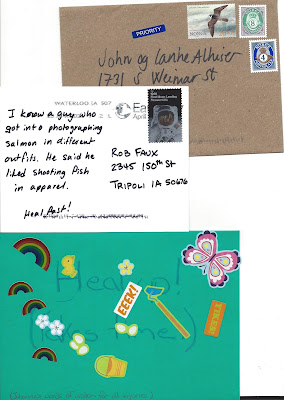 Someone else sent me a crossword puzzle book - which I can now say that I have solved most of the puzzles in the book already.  They were just the perfect level for me to work even though I didn't feel my best.  It was nice to exercise the brain a bit, without having to fight too much.

Just prior to surgery I got a nice care package with some books to read and a book of puzzles.  The books were pretty easy reads - just what I needed and the puzzles run the gamut from easy to really hard.  Still working on that one.

My co-workers at PAN sent me a wonderful packet of picture of their pets encouraging me to rest and recover.  There were pictures of 'cloud therapy' and personal artwork and snow on a mountain... in Hawaii.  It felt good to have the people I work with send me healing messages.

And, of course, Tammy and I have sent mail to each other over the years.  We have two running traditions.  One is to re-use a card by sending to each other with a new message in it.  Some of our traditional favorites have no more space to write more.  Another trick is to send a letter with questions in it.  The recipient has to send it back with replies and they often will add some new questions to the list.

I thought I'd share a few of the things I have received here, but there are several others that aren't shown.  Whether something you sent is here or not, please know that I have appreciated each and every piece of real mail.

Again, you have my thanks.

Now I've got a new task.  I've got to start SENDING some real mail.

Email ThisBlogThis!Share to TwitterShare to FacebookShare to Pinterest
Labels: a crate full of grateful, just kidneying you