Welcome back to Postal History Sunday, where the farmer takes some time on the Genuine Faux Farm blog to share something he enjoys and we all have a chance to learn something new.

For those who might not have joined us on the blog recently, I continue to recover from surgery to remove my left kidney (Apr 28).  I still find my tolerance for screens and my levels of concentration to be wanting.  So, I'll take a stab at sharing with a little less depth and complexity and we'll see what happens this week.

In 1865, Spain was one of the locations in the world that the United States had very limited options for sending and receiving mail.  Of course, that did not stop businesses from corresponding.  And, sometimes we are lucky that a correspondence to a particular business is saved and, eventually, dispersed for collectors like myself to enjoy and learn from. 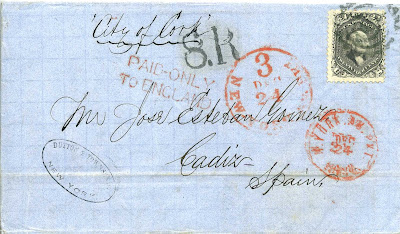 The business letter sent to Jose Esteban Gomez in Cadiz, Spain shown above, traveled from New York to Queenstown, Ireland and then to London.  From London, the letter traveled through France, likely passing through Paris, on its way to the shared border with Spain. 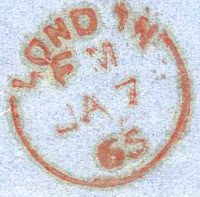 As a quick geography refresher, I supply you with the map below that shows the route this letter most likely took as it left London, entered France (at Calais) and then went to the western end of the border shared by France and Spain.  Bayonne would be one of the closest communities on the French side and Irun would be the companion Spanish community.

There are strong connections in postal history to all sorts of other interests, such as cartography (maps), that it is no wonder that I can find it fascinating.  When I find a piece of postal history that goes to or from some place that I am not terribly familiar with, I have a motivation to learn more about that location.  You could think of it as a travel substitute, if you want.  Whatever you call it, it does open my eyes to other cultures and it sure does make it more likely that I'll have some idea where something is on the globe. 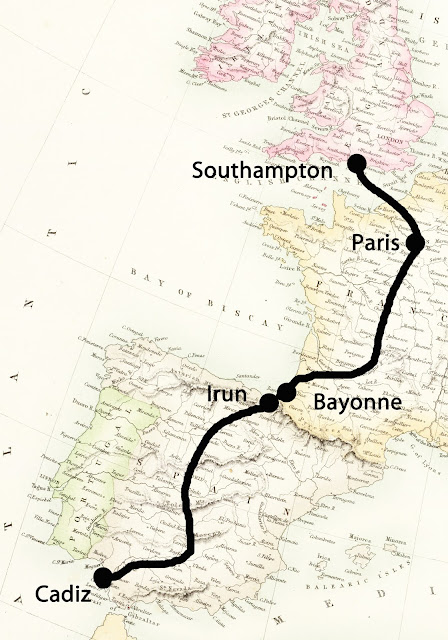 Dutton & Townsend of New York sent many business letters to Gomez over a period of ten or so years.  Most of the items available to collectors have had the contents removed.  However, I am lucky to have one that is intact. 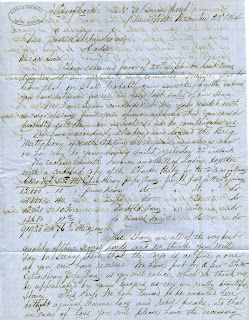 Perhaps at a future time, when my brains feel more like concentrating on it, I can give you more information on the content.  But, there is one very interesting highlight:

The author mentions their concerns about the loss of their merchandise at sea, whether it would be due to a storm or because of "rebel pirates."  In early 1865, the threat of Confederate privateers was minimal.  Early enthusiasm for privateering had waned greatly when those private vessels who managed to capture a merchant vessel couldn't get to a Confederate court to collect their reward.  Why take the risk when the award was that uncertain?

Even so, Dutton & Townsend indicated that they had acquired insurance for their cargo.  The account was apparently lucrative enough that it was worth adding this price to the cost of doing business.

What Did It Cost?

France was one such option, and the cost of mail via the French system to Spain was 21 cents per 1/4 ounce.  This item has a 24 cent stamp on it, which would have been enough to cover that postage ... except... this weighed more than 1/4 ounce (and no more than a half ounce).

In this case, the US postage was 19 cents while 8 reals (8R) were collected from Gomez at the point of delivery.  Of the 8 reals collected, some of that would find its way back to the British and French postal systems via the agreements in place. 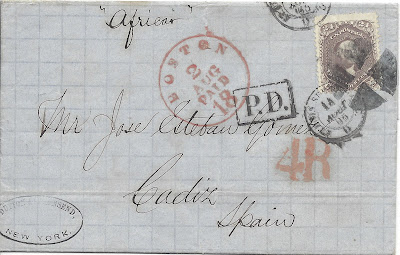 This is where I recognize that both Dutton & Townsend and Gomez were not too concerned about pinching pennies when it came to postage.  Nearly every point in time during this ten year period there are options to get a letter mailed for 24 cents or less.  It seems that Dutton & Townsend, just always put a 24 cent stamp on the letter and then let the postal service determine which method would work for the weight of the letter.

The item above must have weighed less than a quarter ounce, so it was sent by the 21 cent per 1/4 ounce French mail option. 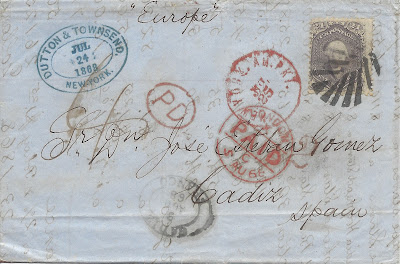 And this item was mailed at a later 22 cents per 1/2 ounce letter rate via British mail.

In every case, there was extra postage paid that was not used.  Depending on the situation, Gomez sometimes had to pay extra postage and sometimes, he did not.  The account must have been lucrative enough that neither party cared to spend the extra energy to save a few pennies on either end.  In fact, some of the letters from this correspondence also show that duplicate letters were often mailed (the word "duplicate" is a docket), perhaps an additional 'insurance' for possible loss at sea?

Whatever the reasons or the logic, I suspect both parties just chalked overpaid postage as a "cost of doing business."

Thank you for joining me for Postal History Sunday.  As you can guess, this topic could actually go so much deeper and have many more twists and turns.  But, for today, this gives you about as much twisting and turning as I can handle!  Perhaps I will revisit the topic in the future and give it all of the attention it so richly deserves!

Until then, be well and be kind.