Less Time to Do It All In

Here we are - December - and there is still plenty for us to do at the Genuine Faux Farm.  The issues this year are the normal ones (fewer hours of daylight and conditions are a little tougher to do outdoor work) and different than they have been (neither of us is a full-time farmer now).  Essentially, we have plenty to do and less time to do it all in. 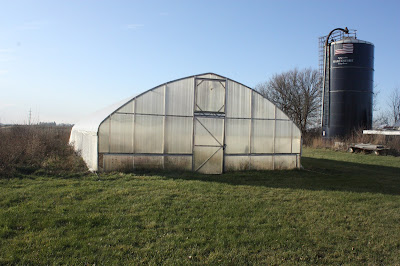 One of the things has been pushed back is the high tunnel clean-up.  With the change in employment (among other things) we realized we had to cut back somewhere.  This time around, some of cuts came by NOT planting late fall and over-wintered crops.  The two of us regret not having some of the greens we would normally have this time of year - but given the reality that there are only so many hours in a day and only so much of us, we didn't have much of a choice.

And so - here we are - looking at getting the high tunnels cleaned up so we can get an early start with some crops next season.

The good news?  It can be pretty nice working in a high tunnel on a sunny, but chilly day! 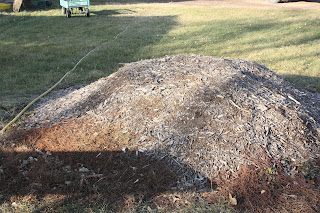 Then, there are the projects that you intended to do earlier - back when the grass was turning green and the shoots of new plants were just beginning to show themselves.  At that moment in time there was so much we were going to accomplish!  Things like....  cleaning up some perennial flower beds and putting wood mulch in them.

So, we got to late November and there was still this pile of wood mulch in our driveway.  If we want to put the car in the garage, we've got to move that pile....  hm.  Glad we have a tractor with a bucket!  And, yes, we did get this one done - but we didn't put the wood mulch where we initially planned.  The bushes in front of the solar panels WILL appreciate the mulch, that is certain.  As far as the perennial beds?  There is always next season. 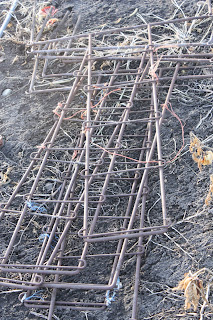 There are ALWAYS the fall clean-up tasks that come with a diversified vegetable operation.  One of these tasks is to take down all of the trellising that we use for various crops.  We have used the trellis structures you see above for various crops but really liked how they worked with our outdoor peas this year.  I think we'll do that one again.  The clean-up was much faster than the plastic fencing we used to use for peas - and this is much easier to re-use. 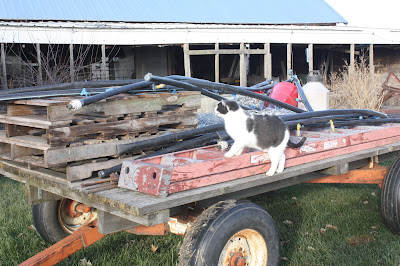 Rosie the tractor gets a fair amount of use this time of year, as do some of our "hayracks."  I use the quotes because they are used for nearly everything other than hay.

Throughout the course of a season, it feels like everything EXPLODES out from our various buildings as we put them to use.  Ladders go out to the orchard trees.  Irrigation header lines to various fields.  Pallets get used for all sorts of things here and there on the farm.  Then there are stakes, feeders, solar fence chargers and poultry netting.  I am sure there was something more on this particular load.

The Inspector approved of my efforts once I brought it in closer to the buildings for unloading. 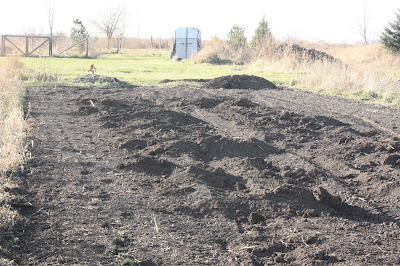 One of the few things that is happening right on time this year is the application of compost from our compost piles to some of the field areas.  The trick, for us, is to get to the task while the finished compost is still unfrozen, but when the fields won't get too ripped up by the traffic.

This year, we have been blessed with a fall and early winter that has not been wet (unlike the last three or so years).  That means we have had a bit more flexibility to spread the fertility where we want it.  This year, the area west of Valhalla got a nice dose of fertility!  We were also able to put some over the newly planted garlic.

With temperatures dropping, we can't expect to be able to do this much longer.  But, if this is all I manage to move this season, I won't be too unhappy.

That's actually saying something when you have less time to do it all in.

Email ThisBlogThis!Share to TwitterShare to FacebookShare to Pinterest
Labels: farm report, whether wythards