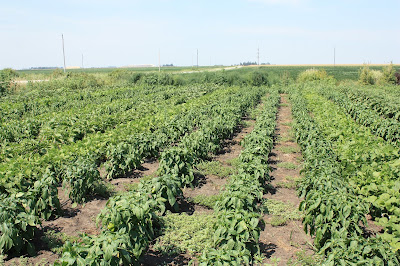 Most farmers have a particular crop that they would identify as their favorite, and I enjoy growing sweet and bell peppers.  A healthy pepper plant shows glossy green leaves on a compact plant, making it relatively easy to cultivate and harvest.  I love the way they look, and it’s rewarding to fill harvest containers with mature fruit that will find homes with our customers.  In the winter months I dream of the neat rows of plants loaded with fruit.

Unfortunately I have lived a nightmare in recent years.  Pepper plants do not react favorably to dicamba herbicides, and our farm has been finding it increasingly difficult to grow one of my favorite crops as dicamba drift from nearby soybean fields inhibits their growth.

In late October, Administrator Andrew Wheeler announced that the Environmental Protection Agency had approved the registration of dicamba products Xtendimax Vaporgrip Xtra, Engenia, and Tavium for over-the-top applications on soybeans and cotton for the next five years “to provide certainty to growers.”  This new registration places further restrictions on the application window for this herbicide, including a seasonal end-date of June 30 for soybeans and July 30 for cotton.

Both BASF and Bayer have made claims that they are addressing dicamba drift by introducing new additives to their products that will “reduce the size of air bubbles” in their products.  It is partially on the strength of these claims that new formulations will prevent drift that EPA gave approval for re-registration.  While these additives and restrictions may reduce drift during the application process, they do not address dicamba’s volatilization issue.

The biggest issue with dicamba products is that they volatilize (become a vapor) after application and then drift to fields that are not populated with dicamba tolerant crops.  A farmer could apply these products, following best practices to avoid immediate drift, and still be guilty of applying a chemical that can move off-target two, three and even four days after spraying.

The science has been clear for a long time.  The factors that increase the likelihood of dicamba drift include higher temperatures, lower relative humidity, no rainfall in the subsequent days after application and increased evaporation surfaces provided by the leaves of the target crops.  Volatilization has occured in Iowa's corn during years when wet fields prevent early use and applications get moved back into late May and June.  The spray application period for soybeans routinely falls into this window where there is an increased likelihood for volatility.

The EPA first approved dicamba products for over-the-top applications in soybeans and cotton in 2016, giving it a conditional two year registration.  That registration was renewed with some additional restrictions in 2018.  But, what many people may not realize is that dicamba products have been applied regularly to other crops, such as corn, for years.

The USGS National Pesticide Synthesis Project shows the rapid increase of dicamba use after the first registration period.  USDA data shows that, in the Midwest region, one quarter (25.4%) of the soybean acres were treated with dicamba in 2018 as compared to 12.6% in 2017 and 6.3% in 2016.  Unofficial reports indicate that use in recent years has continued to increase. 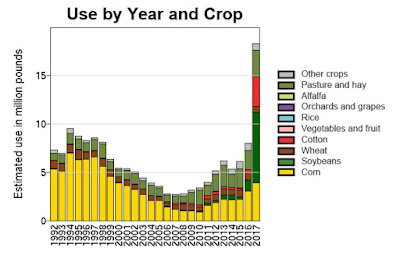 (note: the chart above can be found at the USGS link shown in the prior paragraph.  The chart was viewed on the USGS website on Dec 4, 2020 and rendered here as shown there.  The chart does not yet show 2018 numbers, but you could expect it will show both green (soybeans) and red (cotton) to be at least double the amount shown for 2017.)

This past growing season provided more evidence that dicamba products are not suitable for over-the-top application.  The state of Iowa reported a record number of dicamba-related drift complaints, and weed scientist Bob Hartzler noted that damage was worse than prior years, showing plant injury on a “landscape level” throughout the state. Meanwhile, similar reporting trends appeared in Minnesota and evidence in Tennessee suggested that dicamba isn’t the solution for Palmer Amaranth (a glyphosate resistant weed) that it was hoped to be.

When the EPA allowed for the conditional registration in 2016, growers of crops without dicamba resistant genetic traits braced themselves for what was to come.  After all, it was not as if there wasn’t already a track record that foretold future problems. As early as 2018, leading schools of agriculture were recommending that dicamba technologies be applied as a pre-emergent application rather than an over-the-top spray.  Additionally, the Bader Farms lawsuit revealed that Monsanto was fully aware that the product would cause problems even before they applied for dicamba’s first provisional registration.

I will admit that I was among those who allowed myself a little bit of hope once the 2020 9th Circuit US Court of Appeals ruling was released ordering a suspension against the conditional registration of dicamba. The circuit court opinion cited “enormous and unprecedented damage” caused by dicamba products in the past few years.

Unfortunately, the EPA did not immediately enforce the 2020 circuit court ruling, extending the allowed application of dicamba products until July 31, effectively allowing post-emergent applications to continue as planned.  And now, we have the nightmare of five more years of dicamba to look forward to.

Good luck with the peppers?

Here I am, in Iowa, and I am dreading another five years where I will experience chemical trespass in the form of dicamba drift.

A typical season's yield for bell pepper production on our farm between 2012 to 2015 was 750 to 850 pounds of marketable fruit.  Contrast this to our field production for bell peppers in 2017 (30 pounds), 2018 (5 pounds) and 2019 (51 pounds).  And, to be perfectly clear, our standards for counting a fruit as marketable decreased greatly during those three seasons.  Field peppers showed the classic symptoms of growth inhibitor damage each year, typically beginning in the second half of June to early July.

Our response has been to reduce our pepper production and squeeze it into our limited high tunnel space, where the covered environment seems to protect these plants from volatilization drift.  But there’s a bigger problem we are battling - peppers are not the only crop showing damage.  We can’t cover everything.

When I signed up to be a farmer, I was perfectly willing to make adjustments to address weather, climate, pests, weeds and even consumer demand.  I did not sign up to spend my time and energy trying to protect my farm and my crops from chemical trespass.

It is clear to me that this decision is about protecting the market share of chemical companies and their corresponding genetically enhanced seed stock rather than providing farmers with choices for the tools they use to grow their crops. Farmers who might want to select a different seed product and those who might want to pursue alternative crops or alternative cropping systems are simply left to wonder how much damage they must expect in the coming months to their fields.

Apparently, I can expect that I won’t get to grow my peppers.

Are you interested in seeing more content related to the Pesticide Action Network?  Take the link to the GroundTruth blog.   Your "favorite" farmer is featured there once a month on average.