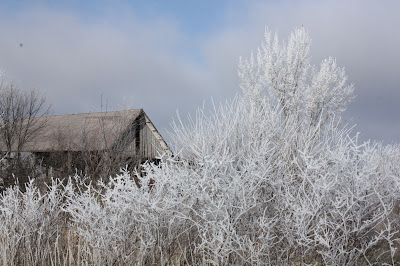 The grass on our farm is fading now that we've had many nights below freezing in a row.  It held off longer with a rather healthy green than it has for many years now.  We even had a hardy little dandelion open a flower under our oak trees in front of the farm house.

Yes, it is true that the leaves on the trees and bushes have been gone for a while now.  We don't really have anything growing in the high tunnel this year - a first for some time now.  So, the outdoor landscape was feeling a little barren to me in recent weeks.

I don't like to critique Mother Nature - especially when the human residents on this planet often do a fine job of tearing up her artistry.  But, things were looking kind of blah - and I was letting that affect me a fair amount.  It really did not help that Saturday was about as gray and uninspiring as a day could get.  Well - that's how I felt - it doesn't matter if it was fair or not. 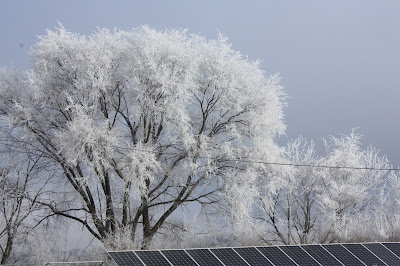 Tammy did help out a bit when she put some solar lights out on the bushes that reside in front of the solar panels.  They are new, so they were brighter than some of our older strings get.  It added a little bit of cheer late in the day - and it was kind of nice to see them when I got up in the middle of the night.

That's when I noticed that it looked like it might be foggy outside - or maybe my eyes were bleary from sleep.  It didn't matter, because my brain registered fog - and when there is fog this time of year, you get hoar frost! 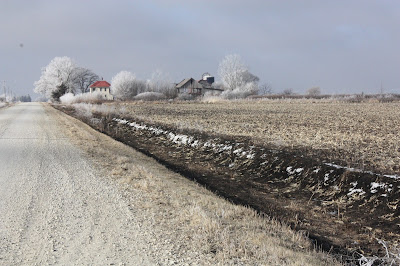 Sure enough, Mother Nature had put on one of her finest pieces of clothing just for us at the Genuine Faux Farm - right at a time when she knew we could use a "pick me up."

We got ourselves outside and decided to go to the Sweetwater Marsh, thinking it might be pretty fantastic there.  It was nice, but there wasn't much for hoar frost at our normal haunts.  Though, it was pretty neat to drive through a shower of frost falling from a tree that a light breeze is knocking from the branches.

So, we drove back to the farm - and realized we were getting the best show right at home.

The tricky thing about taking photos of hoar frost is that it always shows up better when the sun comes out.  But, the reality is that it has a different sort of beauty when the clouds still cover the sun.  And, it is even better when you can see the transition between sun and cloud cover.

We found that we were motivated to work outside for a time - in large part because it had been so pleasant to walk around and enjoy the beauty of nature in the morning.

We put another string of solar lights on another line of bushes.

Maybe Mother Nature wanted us to show her something beautiful too?