Welcome to Postal History Sunday, the blog post where we encourage you to learn something new and allow Rob to share a hobby he very much enjoys with you. Put on the fluffy slippers and pet Fluffy the cat!  Get a hot chocolate or some hot tea, but keep it away from the paper collectibles (and your keyboard)!  And, let's see where today's post takes us.

It is likely that most people who read this blog may recall the anthrax poisonings in 2001 that were a result of letters mailed via the postal system to targeted individuals or groups.  One of the responses at the time was for the postal service to begin irradiation of the mail in an effort to kill the anthrax spores.  That irradiation process often changed the paper, darkening it and making it more brittle - and plastics were often impacted significantly.

I recall this because stamp and postal history collectors were very concerned about mailing items to and from each other - most opting to use other courier services.  Why?  Well, we collect paper items that we don't want damaged and we usually ship them in mylar sleeves.  Not a good combination for irradiated mail!

In true form for me - I told you that story so I could tell you about this one!

The envelope shown below has two slits cut into the envelope.  These same slits also cut into the enclosed letter.  You can see the slits by looking for the white paper I placed through the holes so they are more easily visible. 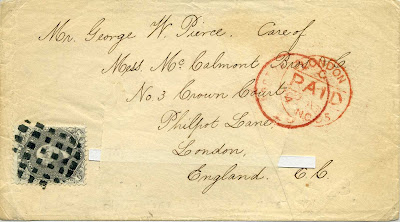 A fairly common practice in the first half of the 1800s was something postal historians refer to as "disinfected mail."  Incoming letters that may have traveled from or through areas that were identified as "unhealthy" or were in mailbags on a ship that was identified as carrying a disease were often (but not always) put through a process to prevent the mail from carrying that disease any further.  Sometimes, a post office would simply just put ALL of its incoming mail through a disinfection process.

Each piece of mail was punctured, slit or cut in some fashion to allow either a fumigant or a vinegar mixture to access the interior of the item.  Where larger volumes of mail were involved, tools were developed to aid in the processing prior to disinfection. 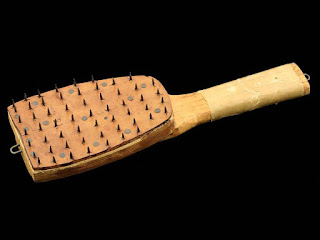 For example, the paddle shown above (collection of the Smithsonian Postal Museum) was used in the United States to open up mail for fumigation with burning sulfur.  I am sure it was not enjoyable to receive a letter punched full of holes and smelling of sulfur, but that was the price people paid for the sense that something was being done to control the spread of disease.

Some of the first examples of disinfected mail can be traced back to the 1400s when the Republics of Venice and Ragusa "perfumed" the mail from the Levant (we would now call it the Middle East) with sweet smelling herbs and flowers.  But, by the time we reach the 1850s and 1860s the practice of mail disinfection was in decline, but not unheard of.

As trade and travel increased between Europe and India, the opportunity for the spread of cholera increased.  What people did not fully understand until 1885 was that cholera spread occurred when a person ingested something that was contaminated with the feces of an infected individual.  However, contaminated water was, in fact, identified as the likely culprit in 1855 by a British physician (John Snow), but the debate raged on for a time after that.

It turns out, the best solution would have been to secure clean water sources, provide sanitation services, and maintain food safety procedures of some kind.  And, in fact, improvements in clean water and sanitary systems in subsequent years would help much of Europe to better handle later pandemics as the century progressed.

As is often the case, a good preliminary solution was likely going to be quarantine and travel restriction.  But, that is rarely popular - especially when it was bad for business.  So, some locations returned to the disinfection of mail to show that something (even if it was deemed to be likely to be ineffective) was being done. 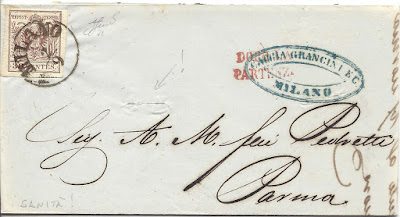 The item above was mailed in September of 1855 from Milan to Parma (Italy).  The Third Cholera Pandemic (1852-1860) was just coming off its peak and the nearby city of Ferrara (east of Parma) still provides data for scientists to analyze today.  Clearly, the spread of cholera was on the minds of the people in this region - and for good reason.

If you look carefully, you can find two disinfection slits that look very much like a person pushed a blade downwards from top to bottom of the letter to allow the fumigant to enter the sealed folded letter.  Because there is no staining, it is unlikely a liquid solution was used on this item.

The folded letter shown above initially got my attention because of the red marking that reads "Dopo la partenza," which means "after departure."  It actually made its way into a blog post about markings that showed an item was too late for the mails that were leaving that day.  The disinfection slits were just icing on the cake for me!  It's always good to have more than one point of interest. 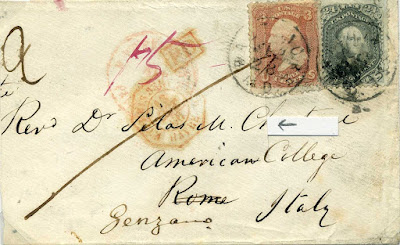 The last item was mailed from the United States to Rome in 1866, during the Fourth Cholera Pandemic (1863-75).

This time only a single slit can be found in the envelope, though a second one could have been on the left hand side.  We will never know because the left hand side has been reduced - probably to get rid of a ragged and damaged edge on the envelope.  Initially mailed to Rome, this item was forwarded to Genzano (SE of Rome) where 15 centesimi were due for the forwarding service - see the red 15?   It is likely that the fumigation occurred at Genzano since there are not records indicating that Rome, itself, was disinfecting mail at this time.

And Now You Know

And now you know a little better why I enjoy postal history.  It opens up a window... or a door... to the story that surrounds each item.  Sometimes the story it tells leads to events of global consequence - such as the Cholera Pandemics.  Other times, they just tell a personal story for a person who lived a life just like ours.

I wonder what story we'll explore next week?