Our last Postal History Sunday of the year!  It's Winter and you don't have anything better to do that have a hot chocolate, put on the fuzzy bunny slippers, curl up in a blanket and read about something that might just be new to you!

Well - even if you DO have something better to do, this Postal History Sunday post is still here for you when you're ready.  It's part of the benefit of asynchronous communication.  And, speaking of types of communication - that's where today's post is taking us! 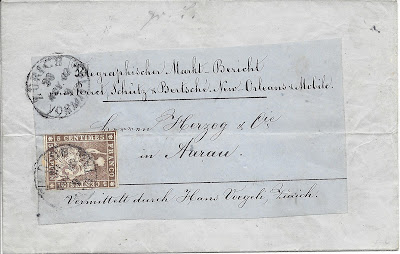 Today's featured item was mailed in Zurich, Switzerland to Aarau (also in Switzerland) on November 30, 1860.

This is a blue folded letter sheet with pre-printed content on the inside.  The outside was addressed with a pre-printed label, which is not something I've seen very often from this period in time.  The label was clearly cut from another sheet of paper and somehow glued to the wrapper.

This is another example of "printed matter."  If you'll recall, printed matter could not be sealed - and this item has no wax or other seal on it.  This was done so the postal clerks could check to be sure the rules were followed for the special rates given to this type of mail.

But, this won't stop me!  I'm always up to learn more and there's a fun story to tell even without that knowledge. 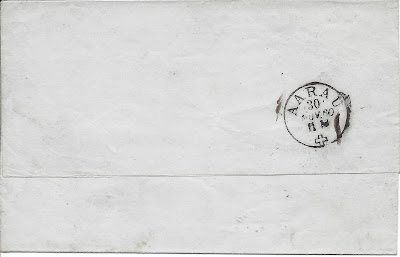 The label states that the contents are a Telegraphic Market Report from Perret, Schutz & Bertsche in New Orleans and Mobile.  The report is mediated or forwarded by Hans Voegeli in Zurich.

The contents, printed on the other side of this piece of paper are in German and are shown below (you can click on the image to see a larger version): 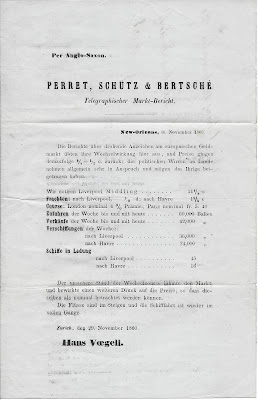 The reports of impending signs in the European money market interacted here, and prices are accordingly (various numbers) the political turmoil in the country is generally very demanding and may have contributed to your results.

The uncertain status of the exchange rate paralyzed the market,and caused further pressure on prices so that they can be regarded as nominal.
The rivers are on the rise and shipping is back in full swing.

There are all kinds of interesting tidbits of information in this short report that most likely is referencing bales of cotton.  Clearly, the news of the tensions between the states was worthy of mention to all who might be interested in the economic impact.  And, limitations to transport of cotton (low river levels on the Mississippi especially) would also be pertinent information to those who might be interested in cotton that came via New Orleans.

For those who might be interested - the process of loading large cotton bales onto the paddle wheel steamers on the Mississippi was quite a process.  Sometimes implementing a chute to drop bales from the surrounding bluffs down to the river level.  This article by historian, Rufus Ward, gives a nice summary.

More to this Story - How the Information Got to Switzerland

I would like to call your attention to two things printed on this item:

The telegraph system in the United States rapidly expanded beginning in the 1840s centering initially around Washington, D.C.  New Orleans was linked into the network as early as July of 1848, when a line via Mobile (Alabama), Macon (Georgia) and Richmond (Virginia) had its final section connected between Macon and Montgomery (Alabama).  By the time we reach 1860, there appears to be a second line that runs north towards Natchez (Mississippi) from New Orleans. 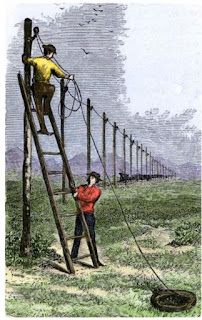 Above was an unattributed piece of artwork available for prints by North Wind Press.

The reference to New Orleans and Mobile makes it entirely likely that this market report was initially sent to New York (most likely) by telegraph, where the message was printed and put into a letter that was sent to Switzerland for Hans Voegeli in Zurich.

At the time this was sent, telegraph services were covered by companies in the "Six Nation's Alliance" of 1857. Essentially, it was an agreement between telegraph companies to allow monopolies for services within the areas each controlled.  By the time we get to 1866 (and the year the trans-Atlantic cable was active), only Western Union remained.

The letter created from the information wired from New Orleans traveled via normal mail services via the mail packet (steamship) Anglo-Saxon.  This ship was an Allen Line steamer that ran from Quebec to Derry (northern Ireland) and Liverpool (England).  Once Mr. Voegeli got this report in the mail he had it printed out, labels affixed, and mailed to his clients using printed matter mailing rates.

Demise of the Anglo-Saxon 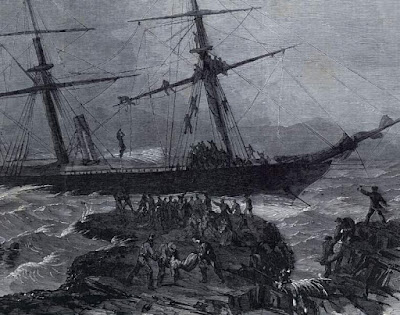 Two and half years later, the Anglo-Saxon was lost in wreck off the coast of Newfoundland (April 27, 1863). The steamer was headed from Liverpool to Quebec when it got lost in a heavy fog.  The ship ran aground in Clam Cove, four miles north of Cape Race.  After hitting the rocks, it rapidly broke apart.  Two hundred thirty-seven of the 445 aboard were lost.  And, as a side note, none of the mail survived the wreck.

However, I bring this up to point out the many directions a person can take postal history.  If I were inclined to do so and persistent enough to do it, I could hunt for mail carried by the Anglo-Saxon on its last voyage prior to this accident.  I could look for items carried on its first voyage.  I could look for mail items that were sent or received by persons who were known to have survived this accident.  It is possible I could find other items that reference this event as well.

Postal history - it's an opportunity to explore the stories that interest you as they connect to an item you can have resting in front of you.  That's a big part of what I enjoy about this hobby.

Thank you again for joining me for Postal History Sunday.  I hope you learned something new and stayed warm and comfortable while doing so.  Have a good rest of the day and I hope your coming week treats you well!