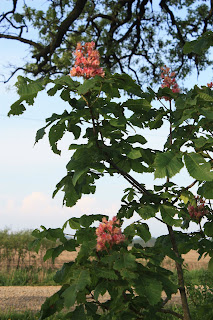 We have a chestnut tree in our front yard - planted next to the spot where one of our Bur Oaks used to be.  The memory of the oak is a hollowed out stump and a break in the canopy the other oaks still respect - as if the old tree were still around to use that patch of the sky as its personal solar collection area.

Naming things is often important for me.  Or, more accurately, having the correct name for a thing is important to me.  I have gotten less hung up on this over time because the farm simply gives me other things I need to worry about.  But, it still bothers me that I did not properly record this tree type when we planted it.  Perhaps it is because we have enough experience on the farm with trees, bushes and plants that just didn't make it.

If you name it - it's harder to watch it die.  Don't get me wrong, there are plenty of healthy trees, bushes and plants on the farm.  But, we have had enough issues that it kind of wore down the desire to be as attached to naming.

A big part of me would love to see these trees returned to the North American landscape.  I would also love to see American Elms returned to the parkways of our Midwestern towns.  I am saddened by the current losses of ash trees in the United States as well and wish they weren't also leaving us with a bit less shade to rest under.

On the other hand, I am sad, angry and disappointed that, in each of these cases, humans precipitated these losses.  Dutch Elm Disease was brought in from France with infected logs purchased by a furniture company.  The chestnuts were lost to a blight that was imported by people who wanted to plant Asian chestnut trees.  And, the Emerald Ash Borer probably came across the ocean in wood shipping crates.  In other words, humans are often unkind to nature.

And I wonder if we actually know what the heck we're doing.
And I wonder what all of the unintended consequences are going to be.

Crazy Maurice (our Weeping Willow) was just telling me yesterday that I think too much.  But, I don't think he really means it quite that way.  Because I often wonder if a big part of our problem is that we don't think enough.

You see, trees have a good deal of time to think, in a very deliberate and thorough way.  While Maurice is likely considered to be 'positively hasty' by many other trees, I suspect he might be reminding me that I flit around the issues quite a bit.

I guess I'll have to think on that for a while.
Posted by Rob Faux at 5:30 AM