Like so many things that are worth doing, putting swales (shallow ditches) into our fields have taken more time and effort than we hoped they would.  The intent and purpose of these swales is to manage the excessive rains and standing water we tend to get on our farm while still trying to work with nature and maintain untilled areas within our growing program. 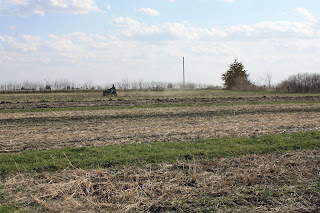 In April, our Eastern plots looked like this (see above).  We got the stubble from last year's crops removed or mowed down and prepared for the new year.  We had permanent green strips/paths every 60 feet running East/West and green strips around the entire eastern area.  We have an older bushline in the west (established in 2005) and a newer bushline in the east and north (established 2015 and still in progress). 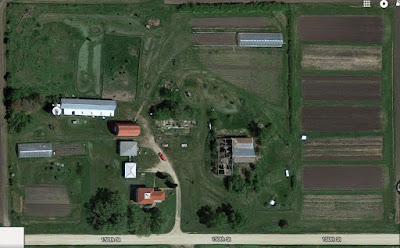 This might help with the visual cues.  The East fields are at the right of this satellite image.  There are seven plots that are 60 foot wide and about 200 foot long.  We established the grass/clover strips the first year we started farming that section of our farm.  We took the northern-most plot out of the rotation when it became apparent that the soil there needed some work and we couldn't trust that there wouldn't be pesticide drift in that field. For the most part, we liked this layout.  It was great for rotation planning and it seemed to fit our methods.  Except...

Obviously the first problem has been excessive rains.  Even if there weren't puddles on the ground, the water table was high.  This often caused problems with the roots, which is particularly bad if it is a root crop.  For some reason, we don't like it when our carrots rot off or potatoes go bad because they are in water.   We have had situations where we have watched a bean crop rot just prior to a harvest and our ability to cultivate fields to keep weed down is severely limited.

Other issues included the amount of 'turning around' we had to do when using an implement on the tractor.  If we spin our beds to the north/south orientation, we can have longer beds and rows - which means less turn-around time.  This wasn't as big a deal when we first set this up because the bushes we had on the ends of the rows were much smaller.  Now that they are well-established in the west and getting there in the east I have to be much more deliberate getting turned around for another pass.

We'll get into some of the other problems some other time.

So - we used Vince to power harrow the whole eastern field minus the outside strips and the northern-most plot.  I have to admit that it hurt me a bit to till up the well established paths with the clover and grass.  But, we are trying to keep the long-term goals in mind as we do this.

We rented a small backhoe and Rob spent a day digging away.  He then used a blade on the tractor to bevel things out on the edges.  The result is one 500 foot + long swale in the east and another 200 foot swale in the fields just south of Valhalla.
I know it is difficult to see if you don't know what you are looking for.  Eventually, it will become much easier to understand as we seed these down with cover crops and then establish some perennial grasses and clovers (and whatever else we decide will work well here).  We wanted to avoid having steep falls on these ditches that will be more likely to erode and a bit more dangerous if you make a mistake with the tractor.

The model for this would happen to be Valhalla, the high tunnel you see at the left of the photo above.  We dug out two ditches parallel to the building and put the dirt into the growing area to raise it up further.  The ditches work great at taking the water off the building and keeping it out of the growing area inside.  But, the steep drop to the ditch makes work in that area a bit more perilous.  We are always careful with equipment, but a bit more forethought is worth a great deal.  If these swales work, I would not be surprised if we tried to make the drop on the ditches by the high tunnel less steep as well.

The long-term plan is to have four or five of these in the East and two in the area by Valhalla.  We will probably select a couple of these to have a more diverse plant population and they will be slated for mowing only to control weeds and encourage the native perennial plants we hope to establish.  The rest will serve just as the prior paths did.  They will have clover, grass and other hardy plants that can be mowed.  Such paths have served us well in the past and they provide great opportunities for perennial clovers to bloom and provide food for our pollinators.

And, who knows, maybe we'll even be able to handle excess rains better after this.
Posted by Rob Faux at 5:30 AM