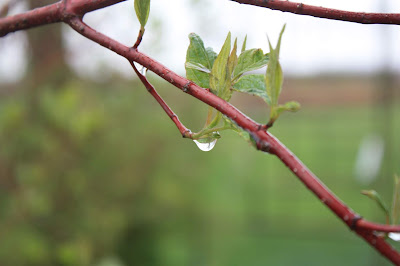 Every once in a while I feel a bit like the water droplets you can find after a light rain.  The surface tension of the water holds the droplet together as it clings to a branch.  Fighting against gravity, it seems like this is a battle that has a foregone conclusion.  Surely gravity will win.  The question is, "when?"

Often water droplets such as the one shown above last far longer than you might expect.  In fact, the one I photographed here was stubborn enough that I gave up watching to see when it would fall.  Well, ya, I had stuff to do, so I couldn't really spend lots of time waiting.  But, even so, it seemed like it would fall at any moment.  Yet, it hung in there. 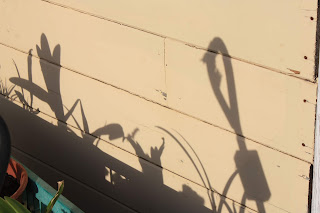 At other times I feel like a shadow of my former self.  What happened to the person who had all kinds of energy to plant a whole bunch of things this past weekend?  Well, he slowly eroded until he was only two dimensional, plastered against the lap siding of one of the farm buildings.  There was so much depth to the plans and ambitions not all that long ago - perhaps even just hours ago.  But, now, we're just trying to keep moving because that might just be the best we can do. 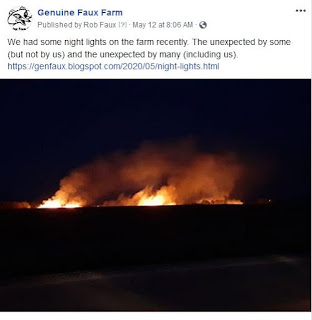 Maybe I feel more like a prairie burn that has finally reached the fire break.  The flames are guttering and failing because the fuel is no longer available.  We roared through so many things in a short period of time, making it seem as if we could accomplish everything and nothing would stop us.

Then, things changed.  And we had no where else to go. 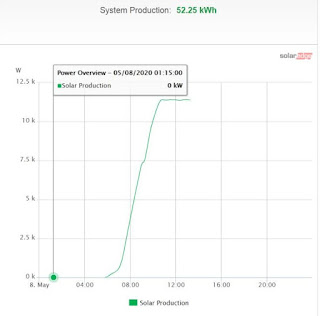 And sometimes, I feel like the tiny bit of solar energy that our solar panels collected during a bright, moonlit night.  The chart for the 24 hour period gives the slightest nod that, yes, the moon does reflect just enough sunlight at times where it will generate just enough power to register.  Even if it rounds to zero.

And, with that, I decide that - I am tired.  Perhaps sleep will bring back some of the flame, more of the surface tension and depth to my person?  Nothing left for it than to try and see.  We'll aim for better than 0 tomorrow, just as we do every day.
Posted by Rob Faux at 5:30 AM