Well, it has finally happened - Rob graduated to a "Smart" phone from his reliable flip phone.  He's not always all that happy about it because a phone is supposed to be for making calls... so there.

However, there are times when the camera is not on his person and there is something that needs to be captured.  The quality is kind of sad in comparison to the camera, of course, but hey, make lemonade!

High Tunnel Lights
Over the past couple of years we have acquired some solar 'Christmas' lights.  They obviously work better during the time of year when there is more sun (for some strange reason) but we like the idea of having solar as opposed to plug-in lights if we can.  Sadly, we have found that they tend to get beat up pretty quickly despite being rated as 'outdoor' lights.  Oh.. and rabbits actually like to chew the wires.  Alas. 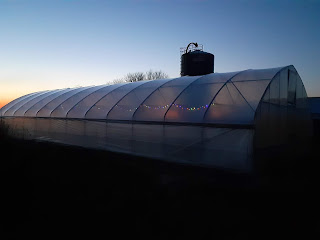 We had one string that we just didn't put out this Winter and Rob had the idea that maybe we would put it IN one of our high tunnels.  Tammy actually made it happen and now we have lights in Eden.  It's actually kind of nice.  They get a little protection from the elements and they still give us a little entertainment value.

Unexpected Lights
Rob went out to complete the chores a few nights ago and caught an odd glow out of the corner of his eye towards the East.

His brain said something along the lines of  "wait a minute, it's evening, the sun is setting over.....  WHAT?!" 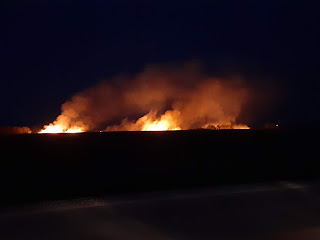 The light was so bright that the initial thought that our neighbors place (about 1/2 mile away) was on fire.  But, upon further inspection, I could see that house.  But, it sure seemed close. 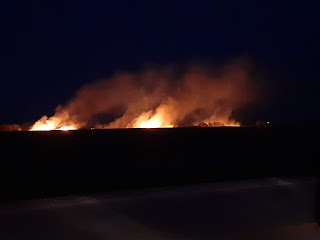 We piled into the truck (after putting the birds away for the night, of course) and drove out to see what was going on.  Hey!  This is pandemic entertainment after all!  We were still a little concerned, but we were pretty certain a prairie burn of some kind was going on.

Sure enough, the burn was three to four miles to our East (and slightly South).  We're glad it was a planned burn and we're glad we were aware and making sure there wasn't an undetected fire that needed attention.  And, I think we were also glad to note that we weren't the only ones that were checking it out.  Sometimes we wonder if people are paying attention.

Email ThisBlogThis!Share to TwitterShare to FacebookShare to Pinterest
Labels: general strangeness and minions, Picture This