As I was taking my 'farm tour' a couple of days ago and taking photos of the things that I saw, I mused that our record with trees on the farm is not necessarily a good one.  Ok, it isn't necessarily a bad one either since there are plenty of success stories.  But, the reality is that our farm offers some challenges, including the high water table and semi-frequent strong wind gusts that have little else to stop them as the blow on through the farm.

There are seven trees in the photo above that we have planted since we arrived at the farm.  There are three that were here form the beginning.  Of them, two were intentional and we're pretty sure the cedar at left of the photo was not.  We have had a reasonable amount of success in this area because it is one of the 'higher' spots on the farm.  There were, at one time, three crab apple trees (put in a couple of years ago).  One failed to make it through the first winter, so we replaced it (the smaller one at left).  A third didn't get caged before a combination of deer and rabbit took it out.  We told you about the poor Gingko tree in our Mid May farm tour.

On the other hand, the spruces and the white pine look pretty good, though the pine is growing slower than we might normally expect. 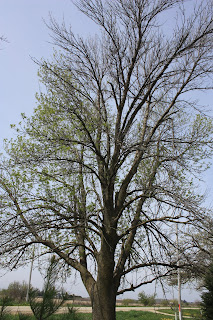 Sadly, the two large ash trees are most certainly on their way out.  We don't see much reason to take them down a they provide some good woodpecker habitat and they are still leafing out some.  They aren't next to any structures, so we're inclined to leave them as habitat and clean up as they come down in their own time. 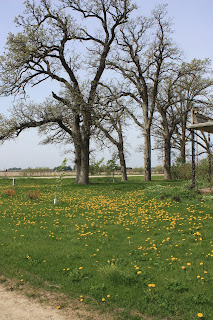 The front of the house has had oak trees in front of it for quite some time.  We love Burr Oaks.  And, you know what they say?  If it ain't Burr Oak, don't fix it!  Um.  Ok, they don't say that.

Oaks are slow growers and long-lived, typically.  One of the group did succumb to a lightning strike several years ago and another has some very large dead branches.  Otherwise, they seem fairly healthy... except.  We have noticed a problem called "Oak Tatters" for the past few years.  The causes for this problem are not firmly established, however there is a strong possibility that certain kinds of herbicides could be a cause.  If you wish to hear from people I respect on this topic, Charity Nebbe hosts Bob Hartzler, Mark Vitosh and Jesse Randall on Talk of Iowa.  And, this Iowa State Extension article also discusses possibilities.

From an anecdotal perspective, years we have noted this problem on our trees have corresponded with our observing an herbicide spray event within a couple of miles on the farm when winds were in excess of 15 miles per hour.  Most of the damage has been on the side of the trees facing the observed spray.  Beyond that, we have no proof.  This year, for example, we DID have unseasonably cool conditions at the point the young buds were swelling.  But, like so many things in this world, there is likely not ONE cause, there is an aggregate of things that causes the situation.  If enough of these things are present - you get Oak Tatters. 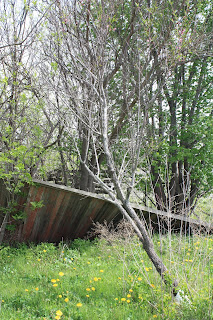 Peach trees and the uphill battle they face in Zone 4 climates aren't unknown to anyone who has tried them.  Our poor peach trees have also had to deal with extremely wet soil AND wind that has pushed them in that wet soil.  Believe it or not, the tree above does have some leaves and blooms up at the top.  We have gotten some peaches over the years off of this fine tree.  But, I am afraid its time with us is nearly done.  That certainly won't stop us from trying again. 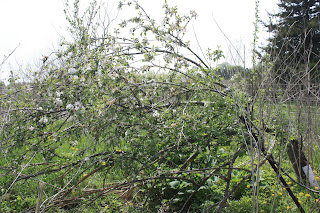 We have several apple trees and had two in the South pasture that have gotten to a very nice size and have been very productive.  Unfortunately, one of them got hit by wind gusts from a couple of directions in a short period of time and it simply was wrestled to the ground.  We haven't had the heart to clean it all up because it has come back each of the past two Springs.  We are almost afraid to spend time staking and pruning it for fear that the extra attention might kill it.  Sometimes you just praise the tree and let it be. 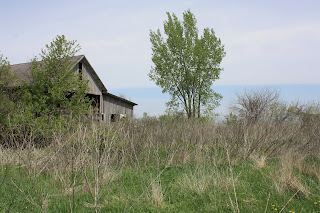 When we first arrived on the farm there was a huge Cottonwood on the northwest corner of the farm.  Not soon after our arrival, half of the tree came down in a windstorm (see a theme here?).  The other half lasted a couple more years until it, too, came down.  But, it didn't come down before it had a couple of children take root.  One is in the swampy area by the barn.  We've just let it grow and it appears to be quite happy.  In fact, it likes to talk to us when there is a nice breeze as we work in the field. 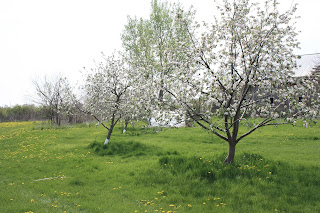 The apple trees in the north pasture have had a better time of it than those we planted in the south pasture area.  That doesn't mean they haven't had their share of adversity, but they keep on plugging on.  We've been able to feed ourselves from our own apple trees pretty well for several years now - even getting enough to give to our CSA members (and occasionally selling extra).  We still patronize a couple of our local orchards, such as Blue Ridge Orchard in Denver and Apples on the Avenue near Nashua. 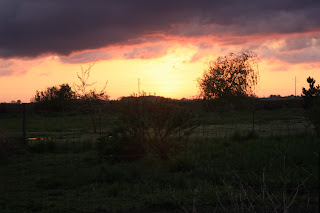 At some point, we'll let Crazy Maurice, the Weeping Willow, introduce you to his friends in the northwest portion of the farm.  Until then, have a fine remainder of your day!
Posted by Rob Faux at 5:30 AM