My Kind of Streaming 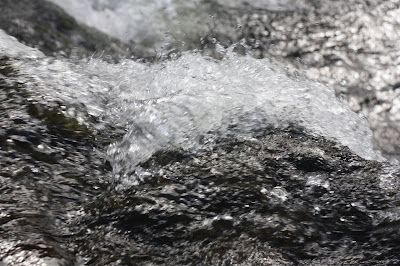 Tammy didn't reply verbally, but she lightly put a hand on my shoulder and then walked a bit further down the trail.  We knew there were some boulders there that would provide a nice place to sit.  We could bide our time watching the water go down the stream and we could listen to it gurgle happily as it passed our vantage point.

At this moment, and in this place - just upstream from our destination - the water was showing me something different and I wanted to try to capture it.  I was pretty certain I would fail on the photography end, but I knew the act of trying would further solidify what I was seeing, feeling and hearing in that moment.  So, I gave it a try.

Actually, I gave it several tries.

Then, I walked down the trail to join my friend.

It wasn't until just recently that I decided to revisit these pictures and see how they turned out.  They aren't frame-worthy, of course.  But, I was right about one thing.  They had the power to transport me, though imperfectly, to that place and time.  When the water was charcoal gray before it became clear as it spilled over a smallish rock.