My grandparents house (on Mom's side) had a smallish front yard that had the typical sidewalk down the middle that met up with the sidewalk down by the street.  The yard sloped away from the house and was a bit higher than the driveway on the south side.  To hold the soil back from the pavement, there were cinder blocks.  And inside of those cinder blocks was some decent black dirt.

And growing in that black dirt, every year that I can recall, were petunias. 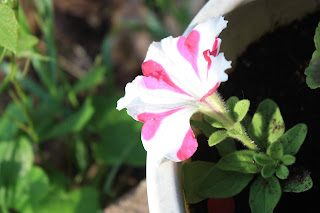 Usually, the petunias were in the purple/blue range of shades and they were the varieties that tended to have the larger, softer flower petals.  The kind that, if you put them up to your nose and inhaled deeply, they would flop against your nostril.

How do I know this?  Well, it was the kind of thing that kids do with petunia flowers.  They had a very light fragrance and it was something to do.  Fair enough. Look in the manual for kids, that book has instructions for enjoying flowers.  It's in the book, page 54. 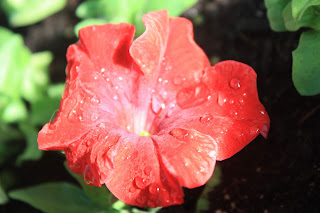 I am not entirely certain why I remember those flowers so vividly.  Nor am I certain why it is so easy to recall how fragile they seemed - all the while showing they were quite resilient, flourishing in a small bit of soil in cinder blocks that surely wicked the moisture out and magnified the heat of the sun.

I remember being asked to water them more than once.  And I didn't mind doing that, really.  Being a kid, I suspect I might have given the adults a little feedback that I didn't want to do it.  But, that was likely more out of principle than anything.  If you are a kid, you have to do that - it's also in the book - look it up.

Now, we have petunias in various pots on the farm this year.  We don't plant them every year, and I am not sure why.  They are one of the first annuals to bloom - throwing out colorful flowers that are as big or bigger than the rest of the plant.  If you take a few moments to 'deadhead' them, they really get going.

Oh yes, I remember learning about dead-heading at the grandparents too.  I bet they did not mind having the grandkids deadhead their flowers for them.  We knew it was something that needed doing, so we just sort of did it if we were hanging around outside.  After all, the grownups were having their conversations and we needed to amuse ourselves.  And, really, most kids actually don't mind being helpful, especially when there is waiting around to be done - but they have to act like they don't like it.  That, too, is in the book.

So, we have some petunias this year.  And I am finding comfort in their presence at a time when comfort is desparately needed.  Tomorrow morning, I'll go deadhead some of the plants.  Then, I am going to pick the biggest bluish/purple flower of the batch and I'm going to hold it up to my nose.

And inhale deeply.
Posted by Rob Faux at 5:30 AM

Email ThisBlogThis!Share to TwitterShare to FacebookShare to Pinterest
Labels: faux real stories, Look in the Mirror