To the surprise of probably anyone who reads this blog, Rob has managed to put out a post a day for over one month.  The last time that happened, the farmers were on an enforced sabbatical to try and find a new 'balance' for their lives.  This time around, the daily posts are less about finding our own balance than it is about offering a gift to those who might want or need it right now.  Perhaps it doesn't always feel like a gift.  After all, not every post is a well-crafted and perfect product.  Sometimes the topic might not sit as well as some others.  But, the intent is still to reach out and to share.  Sometimes it is meant to distract and sometimes I hope to encourage focus.  There is no 'master plan' as to how I am going about it.  Which brings us to today's post.

Choices Choices - Leigh/Liege? - England/Belgium?
Have you ever thought about how difficult it must be for postal people to deal with all of the bad hand-writing and mistaken addresses out there?  If you haven't, consider the item shown below.

The short story is that this letter was posted in 1858 in Le Havre, France.  It first went to England - which was NOT the correct destination - and then it went to Belgium.  Aha!  Right country!

Postal historians often enjoy letters such as this one because they show a journey that was a bit more complicated than most letters of the time took.  The markings on the back of the letter actually help us to tell the story: 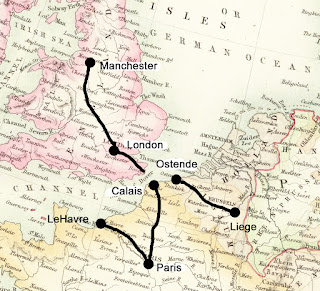 The sender of this letter had some issues with the correct spelling of Liege, Belgium - calling it “Leigh.”  The clerk on the mail train between LeHavre and Paris had lists of post offices to reference.  Finding no “Leigh” in Belgium, he did find it in England near Manchester.  Since the rate was the same (40 centimes) either way, he selected the town that matched the spelling best.  Once the letter arrived in Leigh, the postmaster there probably sighed a little and wrote “Try Liege Belgium” and put it back in the mail stream.

Of course, if you look at what this clerk wrote you could also think he wrote "Try Lieje Belgium."  I guess the writing issue didn't just belong to the general public?
Posted by Rob Faux at 5:30 AM