Physics is the study of objects (matter) as it moves through space and time.  Yes, yes, I know.  The Physicists in the audience are cringing at the simplification, etc.  But, we are actually going to cover Feline Physics today.  The rules are different, so a poor one-line summary of physics will suffice.  So there!

Cats in Motion
For some reason, it seems like cats have their own formulas that they follow when it comes to speed of travel and acceleration.  How is it possible that a cat can cover so much ground in such a short period of time and STILL make it seem like forever?  For an example, the short Youtube video below shows Inspector coming to check that Rob has closed Valhalla up correctly for the night.


A couple of questions I have about cats moving through time are as follows:

1. How does a cat know what speed is appropriate to maintain a human's attention for the entire distance of travel while still frustrating them with the delay?
For example, Inspector will announce his presence by 'meowing' to the humans.  He has their attention.  They respond by saying hello and inviting him to come visit.  He accelerates just enough to show interest and to freeze the human in place.  Then, once he is sure the human is waiting, he decelerates enough to show that he isn't THAT interested.  There appears to be some sort of sensor in a cat that knows when to speed up a little when the human starts to lose interest and to slow down just enough to increase the anticipation (or frustration).

2. Cats appear to have the ability to go from 0 to 60 mph and back to 0 mph instantaneously.  How is it that we have not unlocked this travel potential ourselves?
Granted, it is not often you will see a cat going full speed all that often.  It is also true that you will find them sleeping (0 mph) more often than not.  Perhaps we just need to sleep more and then we can wake up an instantly travel someplace else at a full rate of speed... then sleep again? 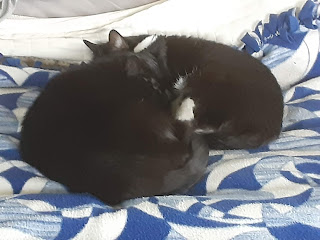 Cat Gravity and Particle Physics
If you have spent any time around cats, you have likely witnessed evidence that they do not follow the same laws of gravity we do.  Watch a cat bound up or down a stairway, leap from the floor to a ledge 6 feet off the ground (with out a run up) or get startled into a jump and turn completely around in the air and you are seeing evidence that they must not have to play by the same rules we do.

But there is no place where the exceptions for cats are more evident than the human lap.  Cats have special sensors that KNOW when you are about to get up.  If they are NOT on your lap at that moment, they will seek to get there, turning off gravity so they can leap more easily from wherever they are to arrive at their destination before your muscles do much more than twitch with the beginning motions for rising from your chair.  If they are already IN your lap they hit you with the double-whammy:

a. they turn gravity ON so they become much heavier than they have a right to be.  It's almost as if they are saying, "NOW, try to move me, bub!"
b. they begin emitting "sleepions."

Sleepions are notorious for causing two reactions in the human species.  The first, of course, is that they may cause drowsiness.  The second is a profound feeling of guilt or regret that you must disturb such a nice, warm, sleepy critter just to do something as inconsequential as.. oh.  say...

Get something to drink.  Use the bathroom.  Go do work.  Find out why the fire alarm has gone off.  You know.. stuff that can wait.
Brownian Motion?
A physicist might tell me that this is random motion of particles in a fluid, but I tell you that this is the random results on your keyboard when a cat decides to help you type.

Cats and the Passage of Time
We know cats are aware of the passage of time because they are very good at reminding humans what time it is. 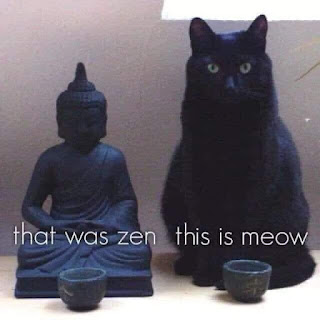 Schrodinger's Cat.. for Cats
The basic idea of Schrodinger's Cat was that if you put a cat in a box with something could kill it and sealed it up, you would not know if the cat was alive - hence it could be both alive and dead at a given moment.

While cats do not much care for this thought experiment with that particular context, they do exercise this thought pattern every day.

Cat: Hm.  The door is closed.  I wonder if there is food or no food on the other side?
(you can substitute "human lap," "sun puddle," or "keyboard" for "food" in that last sentence if you would like variety)

Cats, however, really don't care about the 'both could be true' thought experiment.  What they care about are ANSWERS NOW.  This is why closed doors draw so much feline attention.
Posted by Rob Faux at 5:30 AM